Svalbard is considered to be one of the highlights of the Arctic. This is largely due to the magnificent landscape that greets you. With peaks 1700 meters high, mighty glaciers, fjords and valleys, there are many who fall in love with this place. The permafrost and Arctic climate characterize the landscape, but because of the warm Gulf Stream, the land is not as frozen and desolate as one might expect. In addition, the plants, birds and animals give life to the landscape and make it well worth exploring.

Svalbard is an area of 61,022 km2 distributed on the islands of Spitsbergen, Nordaustlandet, Edgeøya, Barentsøya, Kvitøya, Prins Karls Forland and Kong Karls Land as well as several smaller islands. Of this area, 65 percent is protected.The archipelago is located half way between mainland Norway and the North Pole. Even if it is under a treaty, it is ruled by Norwegian law as well as the Svalbard environmental law. Svalbard is located so far north that the sun does not shine for 4 months, but in winter the northern lights dance on the sky. Copyright: Roy Mangersnes

Svalbard is first mentioned in Icelandic sagas and was probably discovered by the Vikings in 1192 – and then again in 1250. The Vikings called the archipelago Svalbard, which means «cold coasts». There is, however, no conclusive evidence that it was actually Svalbard the Vikings found.

Svalbard was referred to as an inhospitable area with dangerous sea monsters in the Middle Ages, and no more Svalbard visits are described before the late 1500s. The Dutchman Willem Barents was on a ship expedition in 1596 to find a new trade route to India via the North Pole. When he saw the jagged mountains around the Kongsfjord and the Magdalenefjord appearing in the horizon, the archipelago was named «Spitsbergen» – a name that is used today.

Some of the earliest information about Svalbard was of the enormous numbers of whale and walrus. Already in 1606, 700 walruses were harvested at Bjørnøya in six hours, and the whales did not get much better treatment.

From each whale, they harvested several tons of meat and oil, which proved to be lucrative commodities. Communities were established during the summers for receiving the whales. The Dutch arrived early in 1615 with the establishment of Smeerenburg in the north- western corner of Spitsbergen. In 1697 129 Dutch ships caught 1255 whales. Whaling in the 1600s was so important that it lead to a naval battle in Sorgfjorden between two French warships and 40 Dutch whaling ships in 1693. Whaling was described as a massacre. During the 100 years of intensive whaling, several species of whales almost became extinct, and activity on Svalbard decreased.

Russian Pomors from the White Sea area were the first winter hunters in the 1700s. Their catch was primarily based on products from the walrus – such as walrus tusks, blubber oil and hides. In addition, they caught some seals, reindeer, birds and eggs specifically for their own consumption. The Russian trapping activity decreased in the mid-1800s, when the Russians were followed by Norwegian hunters.

The seasonal cycle for the hunters consisted of hunting arctic foxes and polar bears in the winter, when the fur had the best quality. In springtime they hunted the seals on the ice. During the short summer, they hunted birds and harvested eggs and down. In the autumn, reindeer and grouse were their most important prey. More than 50 hunters could spend the winter on Svalbard in the busiest seasons. Today only a few hunters are left, and most bird and animal species are protected.

Several expeditions arrived after 1850 to map the landscape, waterways, sailing routes and harvesting opportunities on Svalbard. Swedish researchers were the most eager towards 1900 and also spent the entire winter of 1882–1883 in the Isfjord. These research expeditions provided important information about topography, ocean currents and geological history. They also reported useful information about arctic plants, animals, the Aurora borealis, climate and glaciers.

Today, Svalbard is an important Arctic environment and climate research area. The major research institutions are the Norwegian Polar Institute, UNIS and Kings Bay Ny-Ålesund, with researchers from many nations. In 2008 the Svalbard Global Seed Vault was established in Longyearbyen as a natural cold storage facility for DNA material from the world’s plants. Millions of seeds are stored to secure our biological diversity for the future. 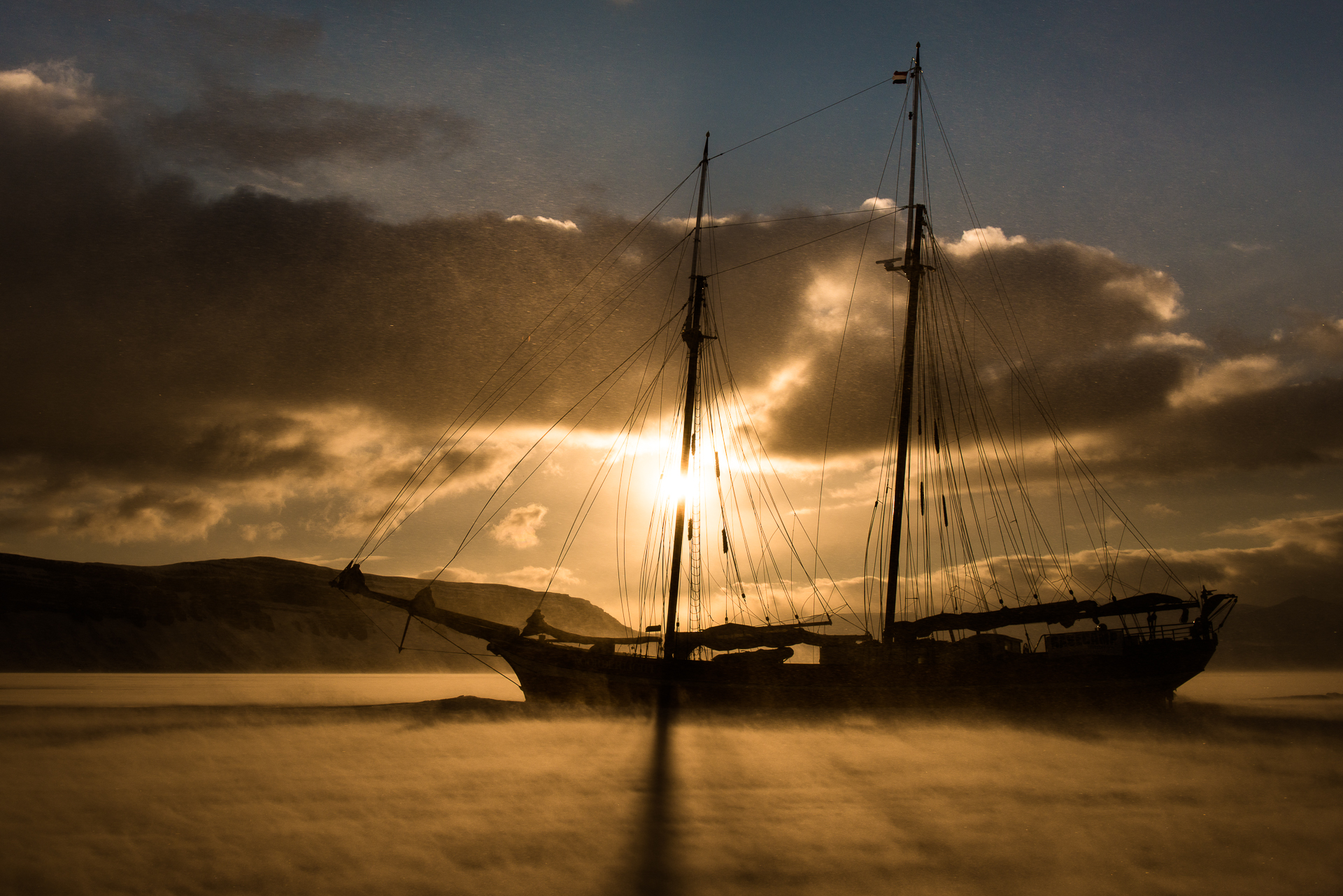 Svalbard was a rough place to visit for the early explorers. Copyright: Roy Mangersnes

Svalbard is the northernmost place in the world with a permanent settlement; with an airport, an international cruise ship harbor and over 2000 people living in the administration centre Longyearbyen. It is therefore quit obvious that Svalbard is the most accessible area in the high Arctic and also the preferred gateway into the region for many travelers.

The first tourists arrived in Svalbard at the end of the 1800s, but it was not until 1990 that formal organized tourism began. In 2018, 73,000 tourists visited Longyearbyen in addition to 46,000 passengers on cruise ships and 17,000 passengers from expedition ships. Svalbard as an exotic and diverse destination draws more and more visitors to the archipelago. Many visitors to Svalbard are adventurous and want to participate in local activities. During winter there are opportunities for organized snowmobile safaris, skiing or dog sledding tours. The offering is even greater in summer with ship expeditions, kayaking and hiking – to name a few. All these activities are organized with armed guides, since there is always the chance of meeting a polar bear. Many people are so fascinated by Svalbard that they keep coming back year after year. Tourism in Svalbard is organized in an organization named Visit Svalbard. 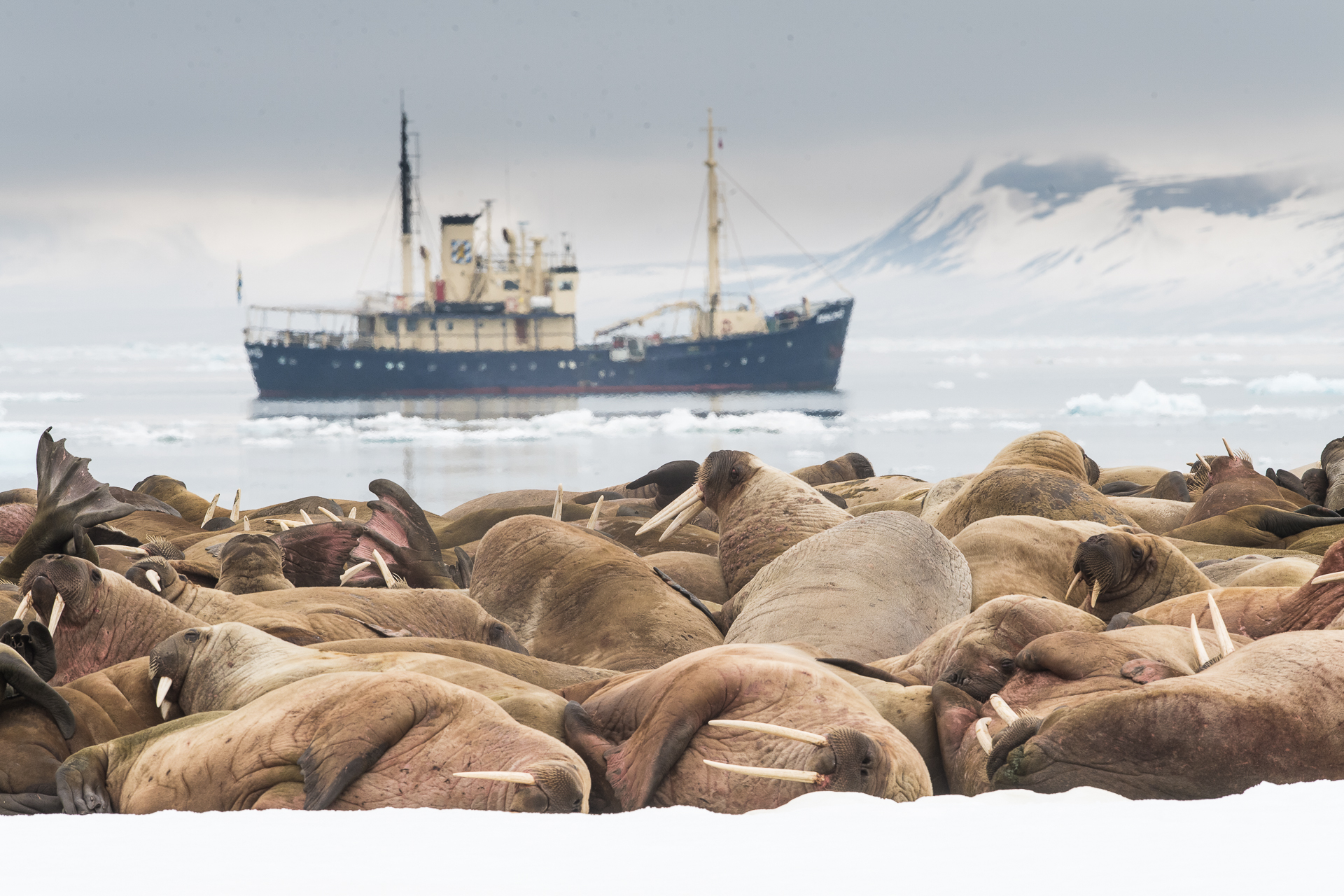 The great majority of climate scientists agree that the earth is experiencing global warming. Average temperatures are rising, glaciers are shrinking and extreme weather is becoming ever more common. How does this affect Svalbard?

Temperature measurements show that the water in the Gulf Stream has warmed by 2–3 degrees over the past 30 years. This has led to increased air temperatures and greater fresh water production from melting ice. For Svalbard, this may cause some existing species of fish and small animals to disappear from the Arctic Ocean, while new species may establish themselves. The consequences could be big, since most animals and birds on Svalbard are dependent on seafood.

Warmer sea water can also cause thinner ice and longer periods with ice-free oceans. This has led to record low ice in the Arctic Ocean, although during some years there were normal amounts of ice north and east of Svalbard, but only for short periodes at the time.

Until 1986, Blomstrandhalvøya in the Kongsfjord was marked on the map as a peninsula bound together with a glacier in the back. After several years of melting, the glacier has now shrunk more than 2.5 kilometers, and left behind a wide strait between the «peninsula» and the ice front. Is this new island evidence of global warming, or do we have to view this in a longer perspective, where the glacier may have another surge as the Nathorst glacier had in 2009?

The «little ice age» was a period from the Middle Ages to the middle of the 1800s, with lower temperatures. In Svalbard, this cold period lasted until 1920, and after that it has become warmer. Many of the glaciers have therefore receded, but it is difficult to estimate how much of this is abnormal and may be due to human influenced global warming. The development of glaciers is important in the climate change debate, and will be closely monitored.

The global challenges of climate change may seem too big for us as individuals, but we can consider the environmental impact of our daily activities and purchases. This may be your contribution to a better future for our planet.

If you are lucky enough to travel to Svalbard, you can help increase the understanding of polar regions with your own photos and stories. You can also contribute to the protection of Svalbard by showing respect for plants, birds and animals. Pay attention to where you walk so that neither plants nor animals are disturbed by your presence. Hiring a guide is also recommended to help you better experience the nature and culture of Svalbard. Certain areas of Svalbard also have restrictions on traffic, which must be taken into consideration. With increased understanding and respect for polar regions, Svalbard can face a brighter future. 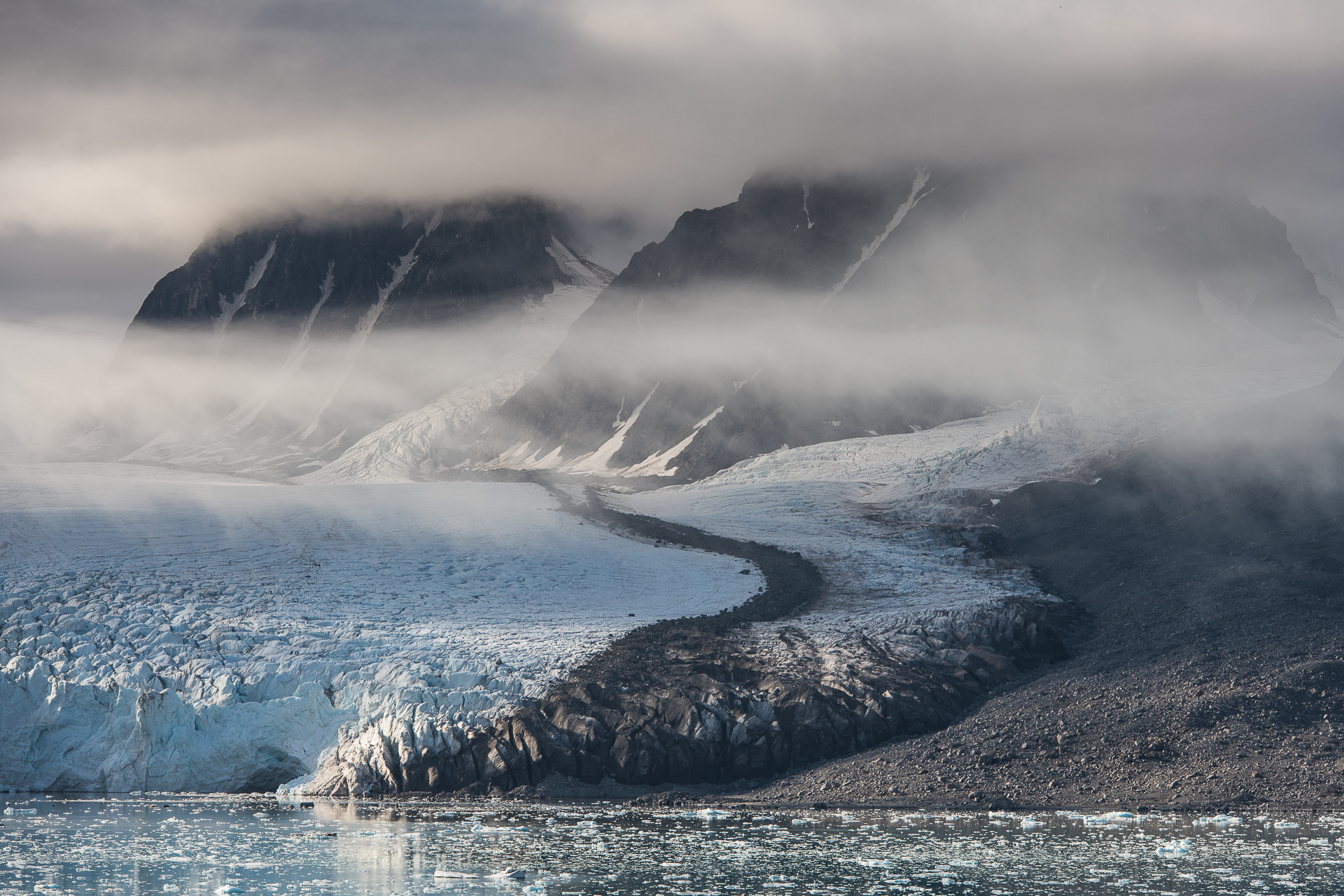 Glaciers are melting and leaving large deposits of gravel along the beaches, like here in Woodfjorden. Copyright: Roy Mangersnes