THE DARK SIDE OF TROPHY HUNTING

Trophy hunting has a negative connotation for many people. Sometimes the activity is called “conservation hunting”, proposing that some of the money trophy hunters pay helps make wildlife management possible. Anything with the word “conservation” in it sounds less invasive or negative, and with support from international wildlife conservation organisations, polar bear trophy hunting has been advertised as a good thing both for polar bears and local Inuit settlements. 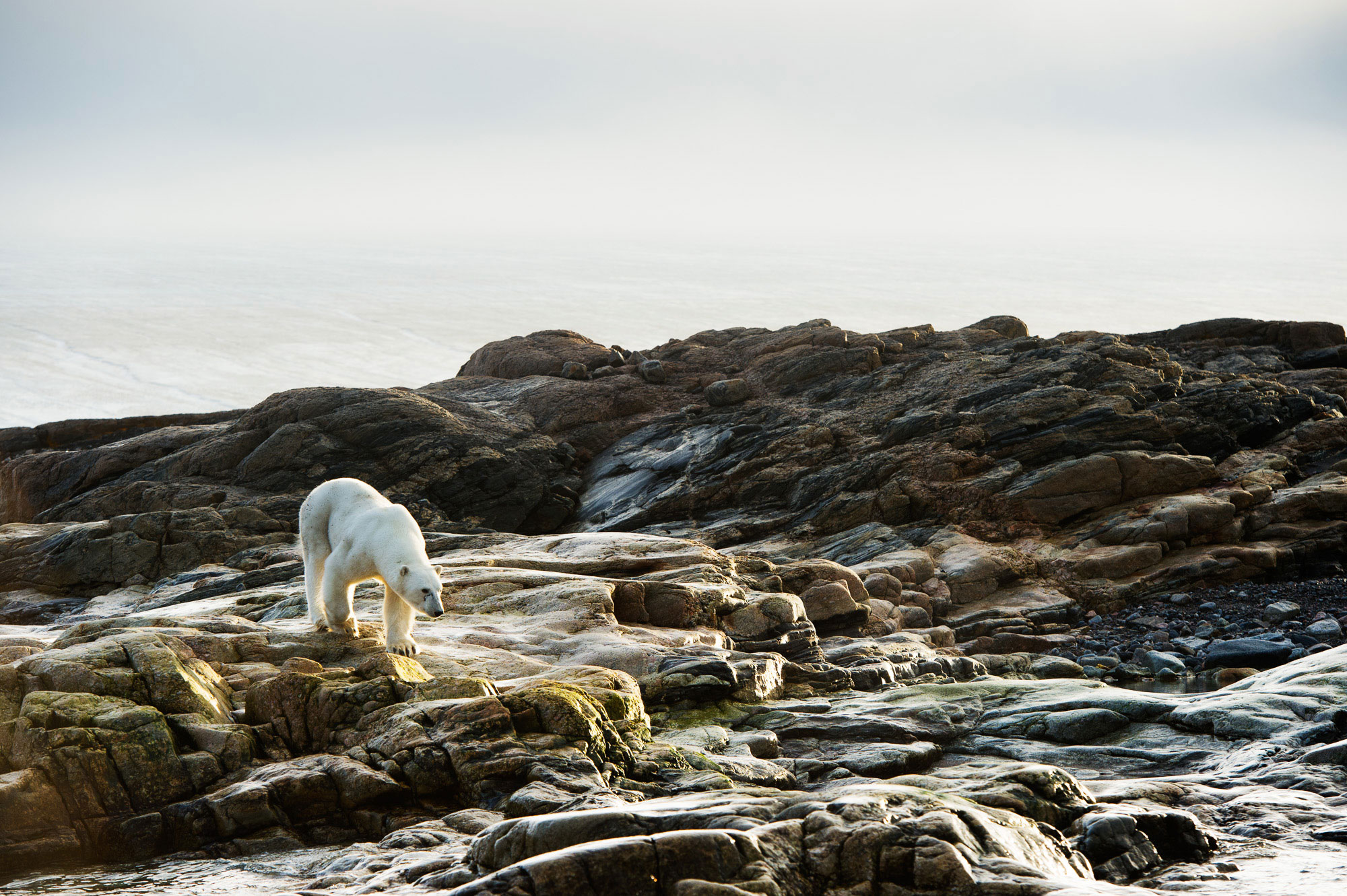 A skinny polar bear with poor skin and trophy quality will not be targeted and killed by trophy hunters. Selective hunting for the biggest and healthiest polar bears force reverse selection, where the smallest, skinniest and sickest bears survive and are supposed to adapt to a warmer climate with less sea ice.

Reverse evolution
Survival of the fittest is a phrase that originates from Darwinian evolutionary theory as a way of describing the mechanism of natural selection. The idea is that species adapt and change by natural selection, the process by which the mutations best suited to the organism’s environment become dominant. The fittest are the individuals most suited to their environment, and thus best adapted to survive. Charles Darwin’s evolutionary theory is relevant for polar bears today, a time marked by habitat changes resulting from global warming.

For thousands of years agricultural practices have used the most productive members of a species as breeding stock to increase the frequency of desired characteristics like size, behaviour, taste or morphology. In contrast, the opposite has often been true for hunted wild animal populations: the most desirable – usually the largest – individuals have been killed, leaving those with less desirable characteristics behind to reproduce and contribute to the gene pool of future generations.

Human-induced selection in wild populations has generally received little consideration. However, a study from 1995 noted that the number of female elephants born without tusks in a part of Zambia had increased from 10.5% in 1969 to 38.2% in 1989, largely as a result of illegal selective hunting for ivory. Genes for tusk-less-ness were being passed down from mother to daughter, resulting in a high percentage of female elephants born without tusks – even decades after hunting had been controlled.

A similar study from 2003 concluded that trophy hunting for bighorn sheep in Alberta, Canada, had caused a decrease in average horn size, from 70 cm to 50 cm, from 1975–2000. Indeed, the biggest rams with larger horns had a greater probability of being killed by trophy hunters, a practice which led to genetic favouring of lighter and smaller-horned rams. The horn-size-selective trophy hunting led to the survival of the smallest, wherein humans forced a smaller-is-better scenario.

There are no studies on the genetic results of polar bear trophy hunting, and some hunting organisations use this lack of information to argue that trophy hunting has a minimal or no effect on polar bear population diversity. Another argument, from the trophy hunting lobby, is that selective hunting for large males actually benefits the population by removing males who may kill small cubs. Indeed, infanticide can occur among bears, felines, canids, primates, insects, fish and other animals, and, as much as we would like to deny it, even humans. However, cannibalism is rare among polar bears and cannot justify trophy hunters eliminating most of the large males.

Trophy hunting is one of the most pervasive and potentially intrusive human activities that affects wild mammal populations, including polar bears. Targeting the largest male polar bears in a population causes the surviving smaller bears to play a bigger role than usual in the reproductive cycle. Instead of eliminating the weak, sick and small individuals, trophy hunters kill the largest, fittest animals with the best fur and trophy characteristics. These large adult males, being the most experienced and effective hunters, play an important role in the survival of the entire population. They leave leftovers from their kills on the ice available for less experienced hunters, and they are the best suited for surviving prolonged ice-free periods. The selective removal of healthy, strong animals from the population takes the fittest genes out of the gene pool while smaller, weaker bears procreate and ensure smaller, weaker offspring. Accordingly, the bigger, stronger animals that would more likely survive a future with global warming are removed from the population while bears less likely to survive habitat loss are left alive.

Reduced mating success
The polar bear is one of the least suitable species for trophy hunting. It is a naturally uncommon species that relies heavily on adult survival, has a low birth rate and high cub death rate, inhabits a harsh environment, and is extremely susceptible to the effects of habitat loss precipitated by climate change and pollution. When trophy hunters specifically target the largest, fittest male bears, concerns other than genetic quality also arise, including whether a depleted population can reproduce enough to recover its numbers.

Furthermore, Canada’s quota system has followed a 2:1 ratio, in favour of killing two males for every killed female. Like trophy hunters, regular hunters also target larger animals – often male – because an animal’s value is priced according to its size and fur quality. The bigger the bear, the more money the hunter receives for it. Therefore, when trophy hunting occurs in addition to the already sex-selective regular hunting activity, affected polar bear population structures may become unhealthy after only few years.

Some threatened and endangered animals, like polar bears and some large whales, exist in low populations and at low densities. For male polar bears, finding a female available for mating is not easy, considering many females are occupied with cubs for at least 2.5 years. Therefore, a sex ratio of two to three males for every available female ensures high mating success in non-hunted polar bear subpopulations. However, when the population of males is reduced or depleted, many females will not mate and the population growth rate will decrease.

A similar situation occurred with the neighbouring M’Clintock Channel subpopulation a few years later. Overhunting by local hunters and selective trophy hunters targeting large males resulted in a sex-selective kill ratio of 89% males to 11% females from 1990–2000. Again, the only way to stop the destructive hunting was to impose a moratorium starting in 2001. That hunting ban only lasted three years, but it ended all polar bear trophy hunting activity in the area.

Increased pressure for higher hunting quotas
Expensive trophy hunting expeditions may contribute economically to a few remote Inuit communities. Such settlements already have hunting quotas for polar bears, distributed among the active hunters or families. When a trophy market for selling local hunting tags arises, some hunters must decide whether they are willing to sell the tag to a foreign hunter or kill the polar bear themselves and sell the skin. In 2018 the price for a polar bear hunting tag in Nunavut was CAD $1,375, which is about 35% less than the guaranteed pre-paid cost of an average-sized polar bear skin in the NWT.

More requests from trophy hunters for local hunting tags could cause conflicts in the indigenous communities about whether to pursue commercial skin-trade hunting or sell more tags to foreigners. The best short-term solution for settlements would be to request higher quotas to serve both demands. For example, in 2003 Nunavut hunters killed a total of 373 polar bears. In 2004 they killed 374 bears, and rapidly increased their kills to 496 bears in 2005. High total hunting activity continued until 2008, at which point it slowly decreased. Estimating how much of that increased hunting activity was related to the peak in trophy hunting is difficult, but trophy hunting likely did nothing to reduce the hunting pressure. Indeed, peaking trophy hunting prices or skin prices may encourage both trophy and regular hunters to kill more polar bears. However, the local economic benefits from trophy hunting may be too low in most Nunavut settlements for local leaders or hunters to fight for more tags for trophy hunters.