The available statistics on polar bear skin prices present some challenges. First, precise values of the total polar bear skin trade in Canada do not exist because Québec and Newfoundland and Labrador have not track the pricing or sales of polar bear hides in their jurisdictions. Second, the figure below shows the average polar bear skin prices from the largest Canadian auction, the Fur Harvesters Auction Inc. (FHA), rather than from all skin auctions. Third, not all of the skins exported in one year were killed and tagged in the same year, making the auction statistics and CITES database asynchronous.

Compared with the CPI-adjusted average value of around CAD $1,000 in the late 1960s, polar bear skin prices increased rapidly in the early 1970s. Considering the introduction of new hunting regulations, the MMPA in 1972, the Agreement on the Conservation of Polar Bears in 1973, and the complete ban on polar bear hunting in Svalbard the same year, some skin buyers may have feared that polar bear hunting and skin trading in Canada and Greenland would also be limited or shut down. The average skin price in 1973 was a record-high CAD $1,074, equal to CAD $5,454 in 2014 CPI-adjusted terms. As the figure above illustrates, only the average skin prices in 2012–14 surpassed that of 1973.

Canada permits skin trading outside the auction system, but no available statistics reflect the prices or numbers of skins sold that way. Direct sales in settlements most likely collect lower prices for skins than could otherwise be acquired through auctions. However, bypassing auctions and selling directly to individual traders may be a good solution for local hunters who want to convert their skins into cash as quickly as possible.

Rising demand
The figure above shows that the polar bear skin price in 2006 was CAD $1,311, and hunters killed 533 polar bears that year in Canada that year. Accordingly, the green point labelled ‘2006’ in the figure below represents the combination of price and quantity in 2006. Similarly, the red point labelled ‘2012’ shows the relationship between the average adjusted skin price of CAD $5,866 and quantity of 671 bears killed in 2012. The same relationship is plotted relative to each of the other years from 2006–14 suggests a supply curve that passes through the coordinates for 2006 and 2012 and comes close to those for 2007, 2008 and 2011.

The increasing demand in animal products, largely from eastern and south-eastern Asian markets, is a critical challenge for many vulnerable and endangered species. Elephant ivory, rhinoceros horns, polar bear skins, tiger skins and reptile skins, as well as other rare animal parts used in traditional medicines, have significantly increased in street value. The economic growth that has occurred in parts of Asia, has significantly boosted people’s disposable income and their demand for luxury and desirable items. As a result, newly wealthy middle- and upper-class people have increased their consumption of rare wildlife products.

Previous studies of the polar bear skin market focused mainly on the supply side, using auction data and skin export statistics to describe how many polar bear skins were sold. Some have used the fairly stable number of sold and exported skins as proof that the polar bear skin market is sustainable and well-managed, rather than damaging to polar bear subpopulations. However, considering the increasing skin prices from 2006–14 and the concurrent increases in hunting activity, the future of polar bears does not look promising.

One of the main problems for polar bears and other vulnerable wildlife species that are being traded arises when the demand-side of the market moves upward, as the figure below illustrates. The green curve represents the demand for polar bear skins in 2006; the demand in 2007–08 was similar. In 2009, 2010 and 2011 the demand for polar bear skins increased rapidly, driving prices toward the red demand curve on which the points for 2012 and 2014 fall. The gap between the red and green demand curves illustrates a demand increase of more than 400% in only six years.

At least two probable causes may explain the upward shift in the demand for polar bear skins from 2006–14. First, more wealthy people in Asia and other areas of the world began demanding luxury items they could not afford before. Another likely cause is that the status of the polar bear as a vulnerable or imperilled species had become a good selling point for fur traders and stores. People in search of exclusive items may have bought skins thinking they had only one last chance to acquire them before polar bears became extinct. Ironically, the fewer polar bears living in the wild, the higher the market can drive prices for their skins. 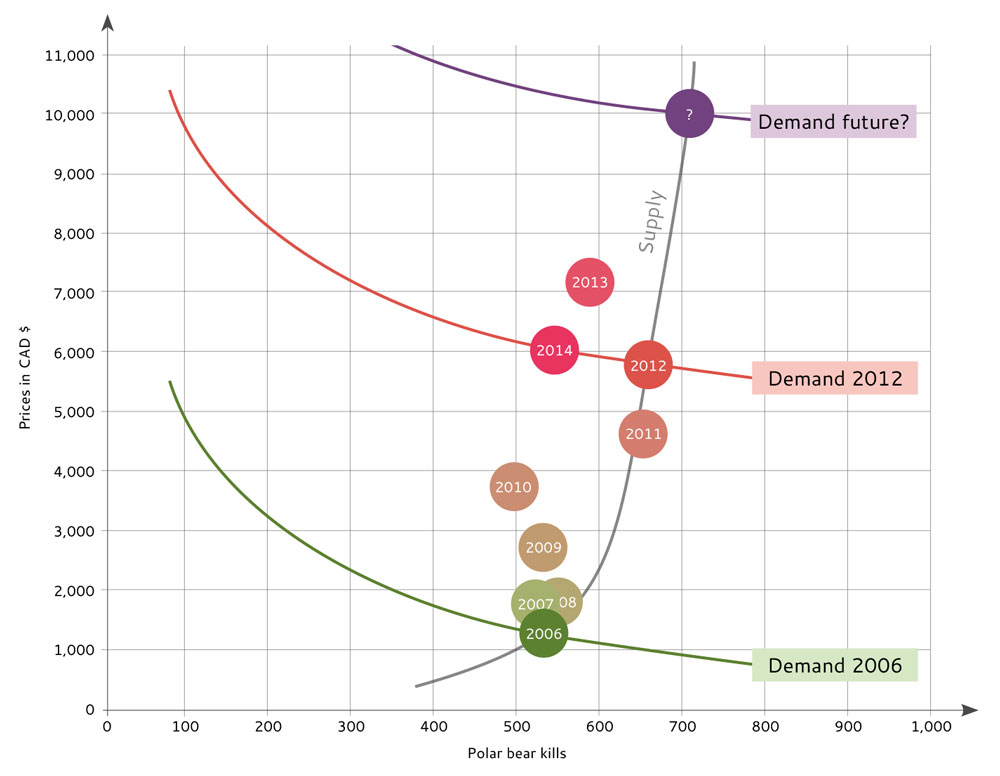