In the 1980s researchers tagged thousands of polar bears in all five countries and installed satellite collars on some bears to monitor their seasonal movements. More subpopulations were discovered in Arctic Canada, and by 1993 a total of 15 populations had been documented. Two more decades of research have shown a total of 19 polar bear subpopulations throughout the circumpolar Arctic. 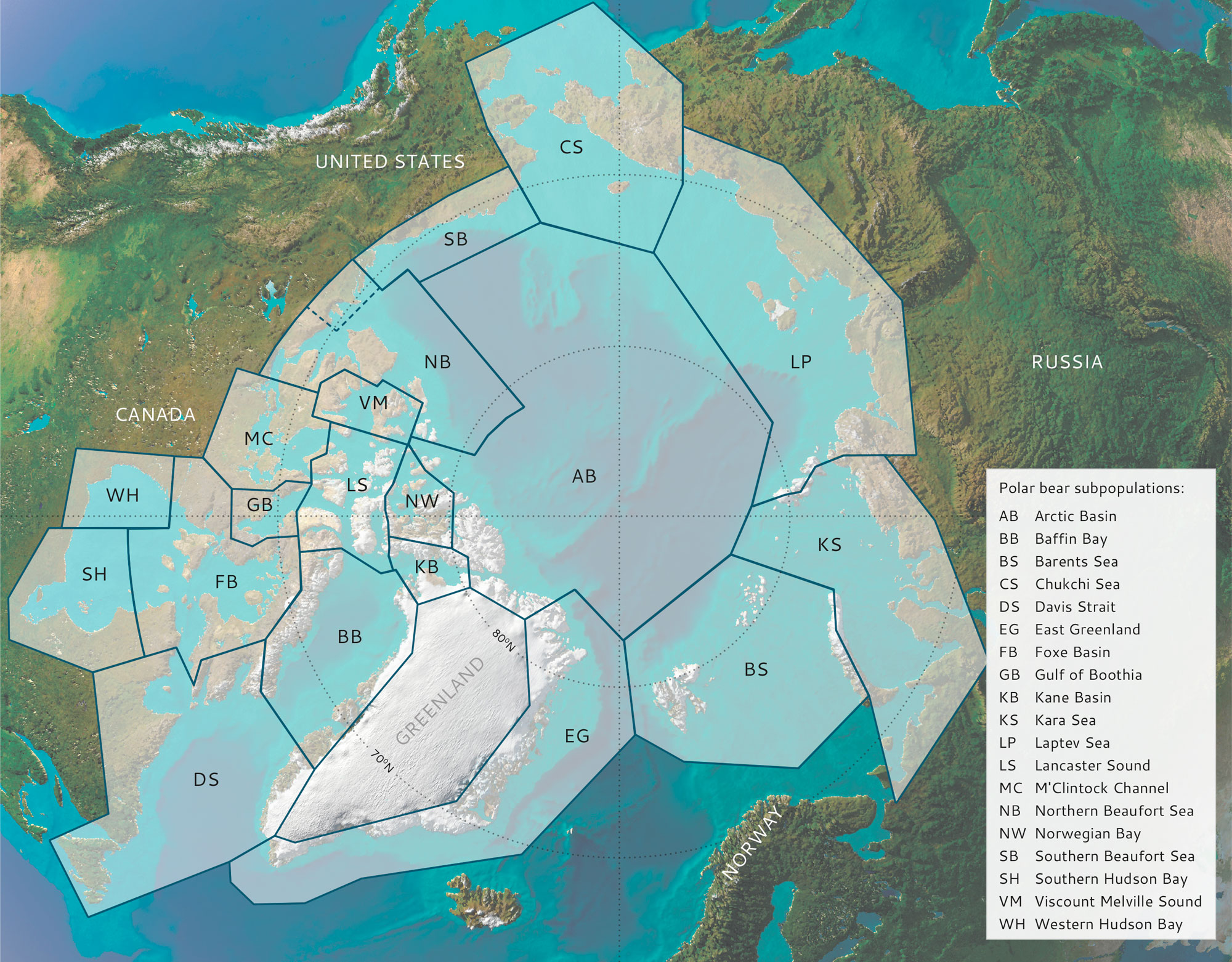 CANADA
Thirteen of the nineteen subpopulations are located either entirely in Canada or partially in Canada and Alaska or Greenland. Southern Hudson Bay (SH) and Western Hudson Bay (WH) host some of the most studied polar bears, documented by long-term tagging and radio-tracking studies. These areas also include the home range of the famous Churchill polar bears, the most viewed and photographed white bears in North America.

The central Canadian Arctic hosts six polar bear subpopulations: M’Clintock Channel (MC), Gulf of Boothia (GB) and Foxe Basin (FB) located in the south; Viscount Melville Sound (VM) and Lancaster Sound (LS) in the middle; and Norwegian Bay (NW) in the north. The life cycles, numbers and distribution of the central Canadian Arctic subpopulations are not as well documented as those in Hudson Bay farther south. To the west is the Northern Beaufort Sea (NB) subpopulation, its western and northern boundaries shared with the vast Arctic Basin (AB) area.

GREENLAND
Canada and Greenland share three polar bear subpopulations: Davis Strait (DS) in the south, Baffin Bay (BB) in the middle, and the small Kane Basin (KB) in the north. Polar bears of this area, as well as those of the Lancaster Sound and Foxe Basin areas, are the most directly affected by human interactions: hunters kill 350–500 bears in these areas annually. Greenland also has an unshared eastern polar bear subpopulation called East Greenland (EG).

UNITED STATES (ALASKA)
The northern and western coasts of Alaska host two polar bear subpopulations. To the north-east Alaska shares Southern Beaufort Sea (SB) with Canada, and to the west it shares Chukchi Sea (CS) with Russia. Reaching deep into the Russian Chukotka territory, the Chukchi Sea area includes Wrangel Island as the main stronghold for polar bears in the area.

Of course, polar bears do not care about the subpopulation boundaries and may cross them during seasonal migration. Indeed, studies from Hudson Bay have revealed that a large number of cubs born in Western Hudson Bay had fathers from another subpopulation. Some polar bears have also undertaken long migrations between continents. This suggests there may be more gene flow between polar bear subpopulations than previously described.