Ringed seals are the most numerous and widespread seal species in the Arctic. They are also the smallest of the Arctic seals, weighing 40–70 kg, which makes it possible for smaller polar bears to catch them. Polar bears may hunt ringed seals all year if sea ice is available, but the most important hunting period is during spring before sea ice break-up. Ringed seals need stable sea ice for maintaining their breathing holes during winter, yet breathing holes make seals coming up for air vulnerable to polar bears. Therefore, to increase their survival rate, seals maintain several breathing holes.

Bearded seals are larger and weigh three to four times more than ringed seals, making them only accessible by larger polar bears. Not all bearded seals maintain breathing holes during winter like ringed seals; instead, bearded seals typically locate along ice edges or pressure ridges of pack ice. A successful bearded seal kill will supply a polar bear with more fat-rich energy and take longer to consume than a ringed seal kill. The lengthier mealtime may attract other polar bears to the feast, but they are rarely seen fighting over food. 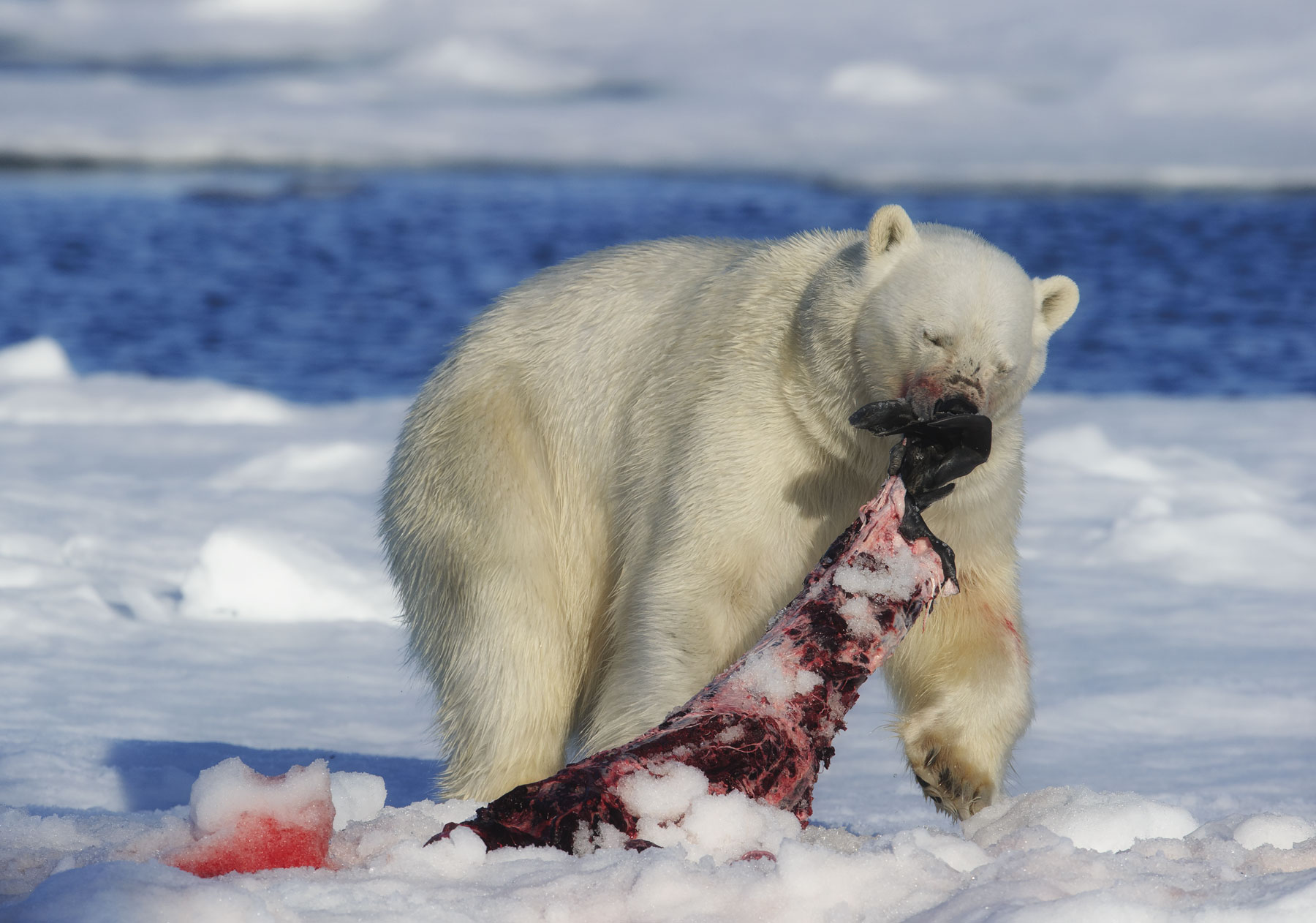 Polar bears have evolved physical adaptations and hunting skills that make them specialised for the kind of complex ice hunt seals with multiple breathing holes may necessitate. For example, polar bears are characterised by a long neck and relatively small head that make it possible to reach far down into a breathing hole or birth lair to catch seals. The small head and ears are well designed for this hunting technique, compared with the large head of a brown bear, which could get stuck in a breathing hole. Nevertheless, the polar bear’s physical adaptations to seal hunting on sea ice may limit the species’ suitability for alternative terrestrial food sources.

Polar bear teeth are specialised for life as a carnivore. Compared with the teeth of omnivorous brown bears, polar bear canines are longer and sharper, and the cheek teeth more jagged. The polar bear is designed for a diet of seals and other fleshy sea mammals – not a vegetable diet like that eaten by terrestrial bears. Polar bear teeth not only reveal what their diet should be, but also their likelihood of utilising alternative food sources.

A polar bear’s most important tool for finding seals hidden in a vast environment of ice and snow is its nose. Polar bears have much longer noses than brown bears and one of the best senses of smell in the animal kingdom. Impressively, estimates have suggested they can smell a seal’s breathing hole up to three km away. This sharp sense of smell makes the polar bear’s nose a more reliable tool than its eyes for locating prey and is especially helpful when sea ice may be covered in dense fog during summer and winter. Fog is most common along ice edges where cold ice meets warmer sea temperatures to produce condensation, and without an extremely sensitive nose, polar bears would have difficulty detecting seals.

Seal hunting in winter and spring usually involves a sit-and-wait strategy near a seal’s breathing hole. When a seal reaches the surface to breathe, the waiting polar bear quickly strikes at the seal’s head. This technique is efficient for polar bears because they burn much less energy than they would roaming constantly to find prey and then chasing it. In fact, their breathing-hole hunting technique is something humans have learned from polar bears and applied to hunting seals in spring with guns or spears.

Thinner sea ice and northward-retreating ice edges in summer and autumn necessitate a different strategy for seal hunting. With more seals resting on solid ice or on floes, polar bears cannot use the sit-and-wait hunting technique. Instead they swim in stealth mode toward seal prey, keeping only the black nose tip visible above the surface. Polar bears also take advantage of wind direction and ice formations, hunting against the wind and hiding behind floes. If a polar bear manages to approach within 10–15 m of a seal resting near an ice edge, the bear may dive into the water to conceal itself before suddenly exploding out of the water with a surprise attack. When the seal tries to escape, in a split second the polar bear stretches to grab it with its long front legs.