Polar bears are intelligent, curious and opportunistic, all traits important for survival in a diverse habitat that changes dramatically from season to season. After thousands of years adapting to sea ice and seal hunting, the condition of their sea ice habitat is crucial. But as sea ice dwindles, polar bears may need to adopt other strategies and hunting techniques for surviving in a warmer climate. Will their extreme physical and behavioural adaptations to sea ice and seal hunting be disadvantageous in a future of changing conditions? 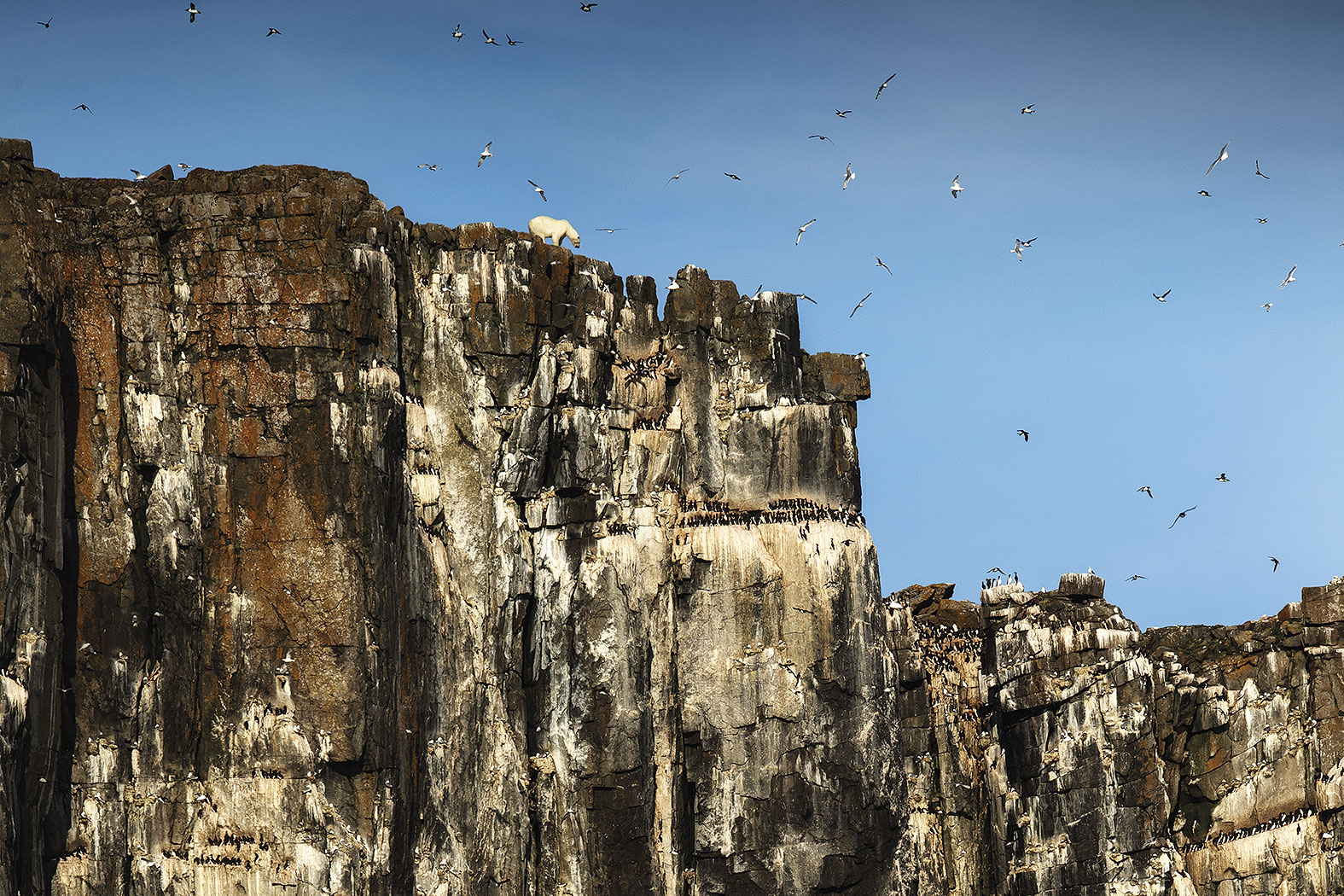 LACK OF ALTERNATIVE FOOD SOURCES
Some people have suggested that polar bears can adapt to the warmer climate by supplementing the seal shortage with birds’ eggs, geese, seabirds, muskoxen or reindeer. However, compared to seal fat, these are not reliable food sources – either in total amount or nutritive value – for the entire ice-free period. Although the shortage of available alternative food sources is a significant problem, polar bear physiology – given their extreme specialisation for seal hunting and ice habitats – may be even more limiting.

Polar bears engage mostly in sit-and-wait hunting, or remaining still and conserving energy by letting prey come to them. Most bears also learn to hunt by stalking across ice or even swimming, but their body temperature can limit such active hunting. Normally, an effective walking speed of 4 km/h helps polar bears maintain a constant body temperature of 37°C in winter. Conversely, a fast walking pace of 7 km/h requires 13 times more energy than resting and causes the body temperature to increase rapidly to almost 39°C. Running polar bears, most likely sprinting after stalked prey or attempting to escape other bears or humans, are a rare sight because they easily overheat.

Considering the extreme energy consumption caused by fast-walking or running, polar bears rarely engage in chasing faster animals, even when given the advantage of a surprise attack. Muskoxen and reindeer ranges overlap some of the polar bears’ home range and could form a food supply in ice-free areas. Unfortunately, these animals are fast runners and occur in relatively low numbers compared to seals. Moreover, if a polar bear managed to kill a caribou, for example, the energy it would supply the bear would be very low compared to that of a seal. Terrestrial mammals lack the thick layer of blubber that sea mammals have, and though the meat may taste good, they cannot provide polar bears with the same energy seals do. 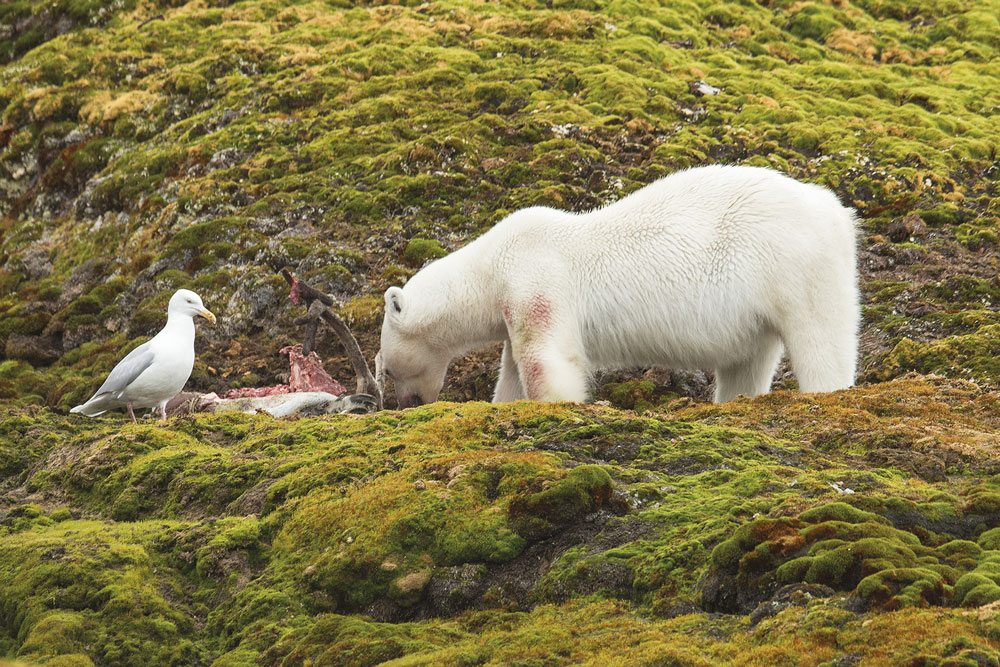 Some polar bears spend the ice-free season on land or islands where birds nest in summer. For about three weeks, duck, goose and seabird eggs may provide some nutrition to a few polar bears. One goose egg – especially a fresh one – can provide a polar bear with approximately 124–210 kcal. In contrast, the preferred diet of seal fat found only on sea ice can provide a polar bear with a daily average of 22,432 kcal. Therefore, to replace the calories from a seal diet, a bear would need to consume 107–181 goose eggs each day. At that rate, even a small number of polar bears specialised in raiding birds’ nests could decimate bird populations in certain areas, all for a very low return in energy at the population level.

Later in the summer most waterfowl moult, leaving them flightless for a few days while they regrow feathers. Moulting birds may seem an easy target for hungry bears, but they are rarely attacked. Along the Hudson Bay coast, a study found a medium-sized polar bear had to catch a snow goose within 12 seconds to gain any energy from the chase. Most polar bears have learned it is waste of energy to even try, so they leave the geese alone to conserve energy.

Some polar bears have been observed grazing during the ice-free season. Whether a polar bear can gain any nutrition from this activity is unknown, but having something in the stomach is probably better than having nothing. Polar bears’ teeth are not as suitable as brown bears’ teeth for grazing, and polar bears probably cannot survive extensive periods relying only on vegetable food sources. 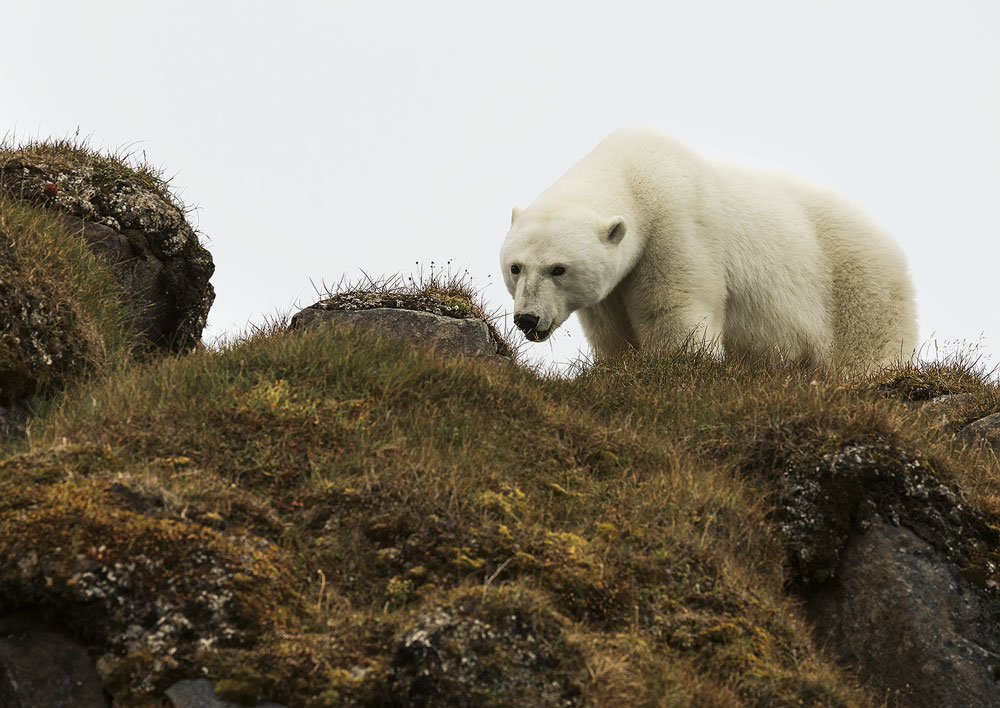 When sea ice retreats farther north, other sea mammals are forced to rest on land rather than follow the ice. For example, some areas in Alaska and Russia have observed huge aggregations of walrus during the ice-free season. These animals are much larger than seals and potentially provide a huge amount of fat and nutrition for some polar bears. Certainly, some large polar bears have specialised in walrus hunting, targeting smaller or wounded individuals. A polar bear that threatens a group of walrus tries to cause a panic: amid the group’s rush toward the safe ocean, a calf or subadult walrus may become injured and therefore vulnerable to the polar bear’s attack.

Climate warming also affects the health of walrus that need to swim longer distances to reach feeding areas and thus cannot rest on sea ice near the continental shelf. Some walrus may get sick or starve to death, rendering them more accessible to polar bears. In fact, walrus dying from sickness or aging are common on Wrangel Island in the Chukchi Sea, and some polar bears in that area have successfully substituted them for ice-dependent seals.

Whale carcasses can be a very important food source for land-based polar bears during ice-free summers. Unlike the carcasses of seals, walrus or small whales, which are quickly consumed by one or a few polar bears, a great whale’s carcass can provide nutrition for many polar bears for months or even years. Whale carcasses can show up randomly along beaches but not often or predictably enough in most places to be a reliable food source every year. However, continued sea ice reductions and extended ice-free seasons could cause whales to expand in number and distribution, resulting in more dead whales available to land-based polar bears. Regardless, whereas scavenging beached great whale carcasses may have helped polar bears survive interglacial periods with limited sea ice in the past, humans have reduced great whale populations such that they will not likely provide much nutritional support for polar bears enduring prolonged sea ice reductions of the future.