Sea ice is classified according to its age and whether or not it is able to drift. For polar bears there are mainly two different types of important sea ice, annual ice and multiyear ice. Each of these greatly influences the abundance of and access to Arctic seals.

Annual ice is floating sea ice that develops in autumn but melts completely in summer. The life span of this ice is normally six to ten months and it is most common in the southern sea ice extents. Annual sea ice is rarely more than 2 m thick and lies over the shallower, more biologically productive continental shelf. Annual sea ice provides the main hunting ground for polar bears.

If newly developed sea ice is transported by wind and ocean currents north toward the Arctic Basin, the ice may survive the summer melt. Such first-year ice can further thicken through bottom growth and develop into multiyear ice. In the present climate, multiyear ice that has not been deformed by pressure ridges is about 3 m thick at the end of winter. Multiyear ice is usually found along the northern coasts of Greenland and Canada and in the Northern Beaufort Sea. Parts of this thicker ice melt during the summer but refreeze in the winter.

Annual sea ice can be landfast ice or pack ice. Landfast ice is found attached to land, in bays, fjords and in front of glaciers, providing important hunting areas for polar bears in spring and early summer. During ice break-up, landfast ice starts to melt and disappear; the remaining offshore ice, made up of moving ice floes unattached to land, is pack ice. This ice can sometimes be near the coast or in channels and forms the outer limit of the landfast ice. Pack ice can further be divided into drifting pack ice – which creates pressure ridges when pushed by wind, currents or other forces – and the ice edge, the boundary between the sea ice and water.

Two main characteristics of Arctic sea ice are that it reaches its largest extent in winter, between February and April, and its lowest extent in September. The seasonal patterns of ice melt and availability fall into four fairly ecologically distinct ecoregions: seasonal ice, divergent ice, convergent ice and archipelago ice, each illustrated on the map below. Polar bears have adapted to these seasonal patterns in order to survive for months during summer and autumn, which present dramatic habitat changes, including no sea ice at all. 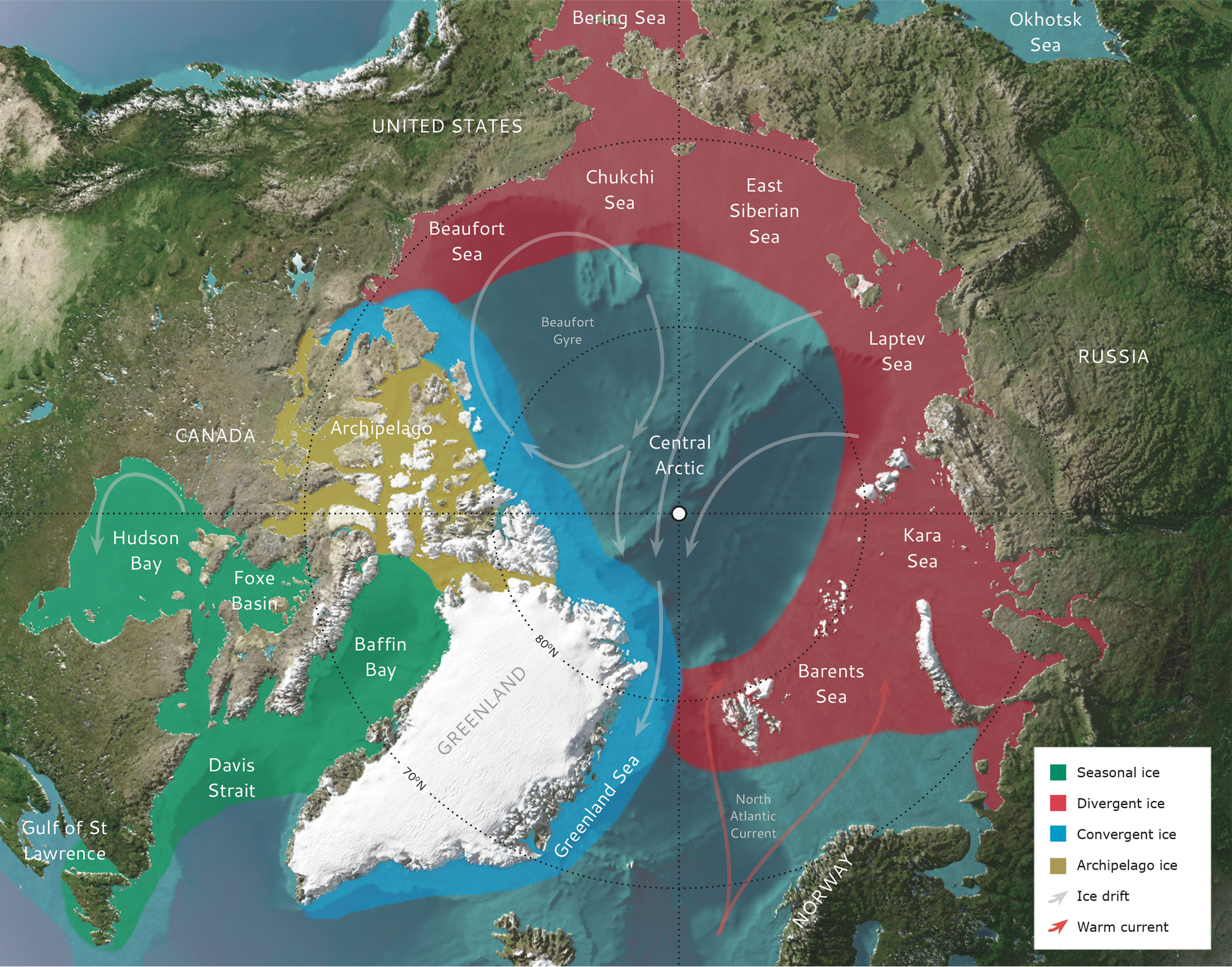 Seasonal ice
The seasonal ice ecoregion is characterised by the complete or nearly complete melting of sea ice for several months in summer. All polar bears depend on stored fat from the seal hunt in winter and spring so they may return to land for months of less food and starvation. The period between ice break-up and freeze-up is thus crucial for the bears’ survival, especially younger, less-experienced bears or those with low fat reserves.

The seasonal ice ecoregion is located at the southern extreme of polar bear range, where the sea ice melts completely each summer. It includes Hudson Bay, Foxe Basin, Baffin Bay and Davis Strait, as represented by the green area on the map above. Polar bears in this area spend the summer and autumn along the shore, waiting for the ice to build in October–December.

Divergent ice
The divergent ice ecoregion is characterised by the extensive formation of annual sea ice every winter and spring. At the end of September, sea ice forms farther north and along the shore, slowly increasing in extent and thickness. By March or April, the ice reaches its maximum extent before retreating again to reach the sea ice minimum of September.

The divergent ice areas are found in the Barents Sea, Kara Sea, Laptev Sea, East Siberian Sea, Chukchi Sea and Beaufort Sea, as shown in red on the map above. As the sea ice pulls away from the coast in summer, polar bears face the decision to stay ashore with limited access to food – similar to bears in the seasonal ice ecoregion – or to follow the retreating sea ice north. If they head north, retreating summer ice far offshore may be buoyed by less productive waters in the deep Arctic Basin. As a result, fewer seals typically live far offshore than closer to land, but for polar bears the risk of following the sea ice and finding few or no seals may outweigh other potential paths to starvation. Adding to their predicament, polar bears arriving or altering their decision later in the season may face a long and exhausting swim.

Archipelago ice
The archipelago ice ecoregion, as illustrated by the olive area on the map above, has waters typically 200–500 m deep throughout the Arctic Archipelago between the Beaufort Sea and Greenland, including islands such as Ellesmere Island, the Queen Elizabeth Islands and the north-eastern parts of Victoria Island. This ecoregion crosses Nunavut and the Northwest Territories (NWT) of Canada and is comprised of interconnecting bays, fjords, channels, straits, sounds, gulfs and cold water surrounding the hundreds of islands forming the Queen Elizabeth chain. Its northern latitude and limited influence by warmer southern waters cause a relatively constant cover of ice sheets and pack ice in the archipelago ice ecoregion.