Sea ice cover is one of the key components determining the polar climate system. In recent years much attention has focused on decreasing Arctic sea ice and its link to global warming. To understand the effects of changing sea ice conditions for polar bears and other ice-dependent animals, understanding the underlying forces dictating where and how changes to sea ice occur is important.

Sea ice extent is often used to describe sea ice conditions; an area of sea is defined as ice-covered when it contains 15% or more sea ice, and not ice-covered if it contains less than 15% sea ice. Satellite images help identify the outer boundaries of the sea ice, and analysts record all of the area within as ice-covered. But sea ice extent measurements say nothing about the thickness of ice, how much open water there is relative to sea ice extent, or whether the ice is suitable for polar bears.

Satellite images
Since November 1978, satellite data have been the main resource for monitoring sea ice. NASA’s Scanning Multichannel Microwave Radiometer satellites pass over the polar region every day to gather data that are converted into images for analysis and publication. These satellite images of 25-km grids make it possible to see differences in the sea ice extent, including changes over time and between areas. Decreasing sea ice extent is also one of the most used measurements for expressing the effects of climate change in the Arctic.

Variations in sea ice extent
Maximum seasonal Arctic sea ice extent occurs in March. From 1980–2017 March sea ice covered almost all – 14.5–16.5 million km2 – of the Arctic Ocean; sea ice was about seven times the area of Greenland. As the blue curve in the figure below (to the right) indicates, the highest annual maximum sea ice extent ever recorded was 16.4 million km2 on 14 March 1983, and the lowest annual maximum extent ever recorded was 14.4 million km2 on 5 March 2017. In all, sea ice extent decreased 12.2% between these two extreme dates. Notably, some of the March sea ice covers areas without polar bears, such as the Sea of Okhotsk south-west of Kamchatka Peninsula in Russia, the Gulf of St Lawrence in Canada, and the Gulf of Bothnia between Sweden and Finland. These three areas comprise the ‘Non-Arctic’ category in the Table below. 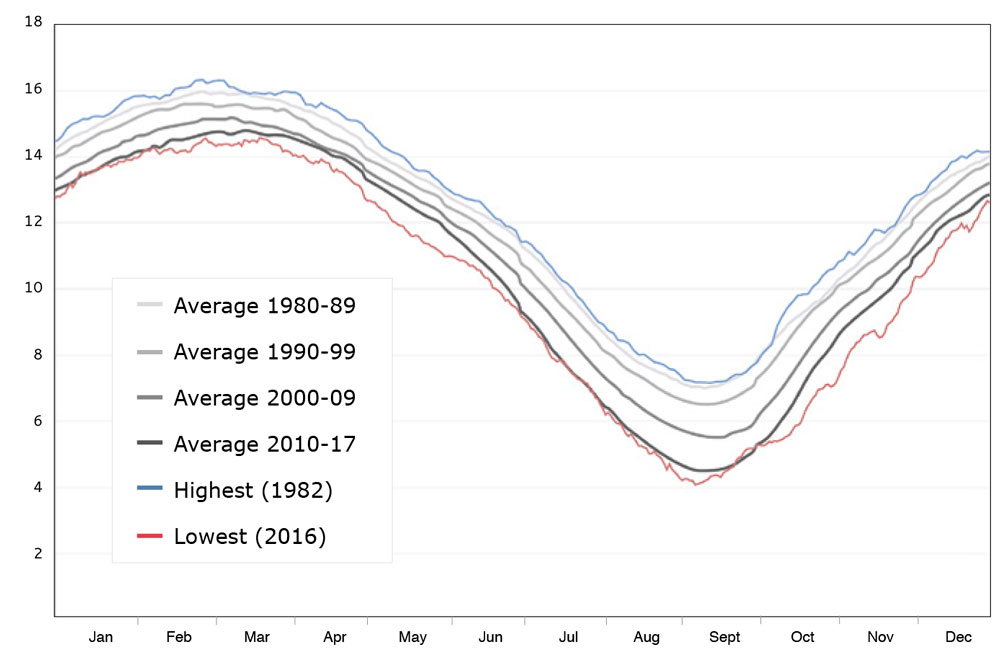 Overall sea ice extent
Sea ice extent is highly dynamic as ice moves around the Arctic Ocean. Because sea ice is controlled to some degree by wind, oceanic currents and air and water temperatures, the shape and extent of sea ice can differ from year to year. Consequently, some areas are more affected than other areas, as the table below illustrates. Indeed, the sea ice extent within the 12 listed Arctic areas decreased from a high level of 11.60 million km2 in the 1980s to 10.18 million km2 in 2010–17. The table shows the reduction of 12.2%, or 1.42 million km2, is not evenly distributed. Most of the decline occurred after 2000. 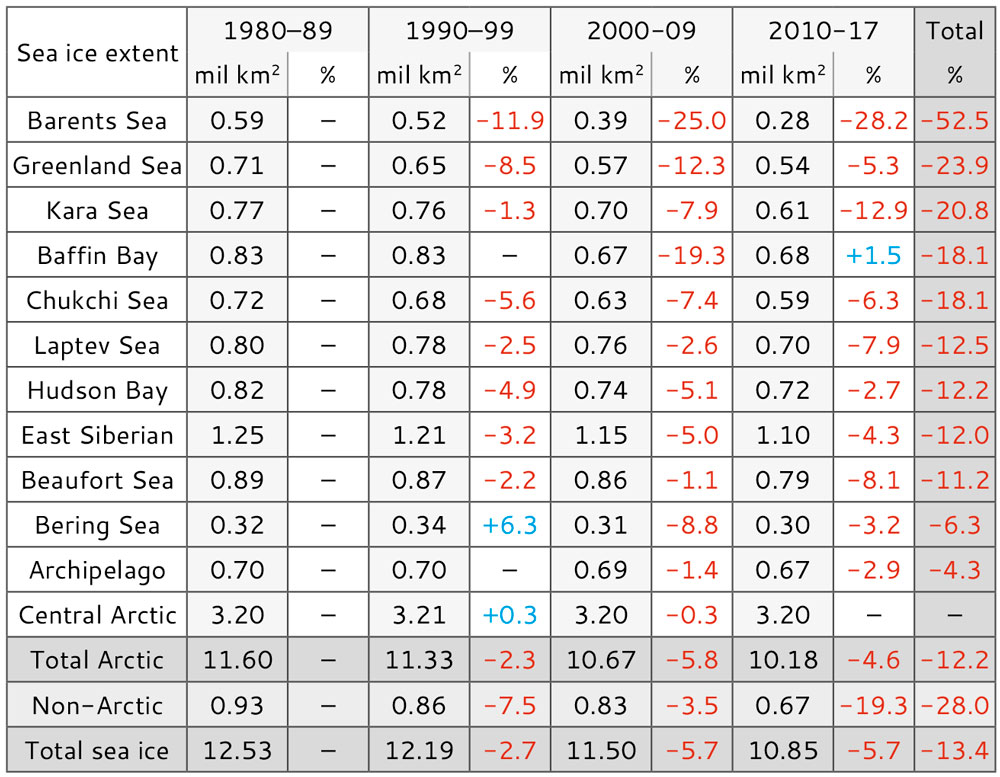 The Barents Sea experienced the biggest loss in sea ice extent: 52.5% from 1980–2017. This is more than twice as much as the sea ice extent decline in the Greenland Sea or any of the other Arctic areas. Even with its small size, the Barents Sea represents 21% of the overall reduction in Arctic sea ice extent after 1980. If this trend continues, Svalbard and Franz Josef Land will likely experience ice-free winters in the near future.

The Laptev Sea, Hudson Bay, East Siberian Sea and Beaufort Sea all experienced similar decreases in sea ice extent, ranging from 11–13% in 1980–2017. The Laptev and East Siberian seas in Arctic Russia have no direct connection to the warmer water from the Atlantic or Pacific oceans; reductions in sea ice extent there are thus lower than in neighbouring areas to the west and east. Interestingly, although sea ice extent declines in the Beaufort Sea and Hudson Bay are quite similar to those in the Russian Arctic, the former areas have received more media and scientific coverage showing links between decreasing sea ice and diminishing polar bear populations and health. Media members and scientific researchers may prefer Hudson Bay’s location, being the most southern area with regular polar bears, but the area’s average sea ice extent decrease from 2010–17 was only 2.7%, a moderate decline in that period.

The Bering Sea, south of the Chukchi Sea, has not been as affected by the warmer climate as neighbouring areas to the north. The sea ice extent of the Bering Sea decreased by only 6.3% from 1980–2017. One cause for this more stable situation may be only a minor increase in air and sea temperatures.

The archipelago ice in north-west Canada had only a 4.3% decrease in sea ice extent from 1980–2017. This area is often considered the most suitable area for polar bears in the future if global warming continues. In that case, if polar bears in southern subpopulation areas suffer a local population crash, they could be forced to migrate. Northern parts of Greenland and Canada would likely still have some sea ice and, with less multiyear ice, may provide a better environment for polar bears than they currently do. This may sound controversial, but a few areas still exist where thicker sea ice may be one of the main factors limiting population growth for ice-dependent mammals. However, areas with multiyear sea ice over deep, unproductive waters will maintain limited biological productivity even if replaced by thinner sea ice.

The Central Arctic around the North Pole has not yet experienced any serious changes in sea ice extent, remaining at about 3.20 million km2 from 1980–2017. However, this does not prove that climate change has no effect on sea ice in the most northern areas. Indeed, although sea ice extent remained fairly constant in the Central Arctic from 1980–2017, other negative trends have affected the area near the North Pole. The ice concentration has dropped in recent decades, resulting in more open water areas and less multiyear ice, as the red and dark blue areas in the satellite images above indicate. The sea ice thickness and volume has also decreased in the Central Arctic.