Day 1 – 4.8.2020 Slightly delayed due to fog at the airport we left Longyearbyen and travelled out through Isfjorden in the late evening light. The tour was a joint partnership with Fotoreisen and the guests were Swiss, German and Austrian. Just outside Barentsburg we started spotting whales as a couple of Minke whales swam by. During the night we continued north along the west coast.

Day 2 – 5.8.2020 At breakfast we had a beautiful encounter with a Polar bear on the beach, nearby an old Sperm Whale carcass. Watching the bear was a very nice start to our expedition, and everyone got a good set of images the first morning. 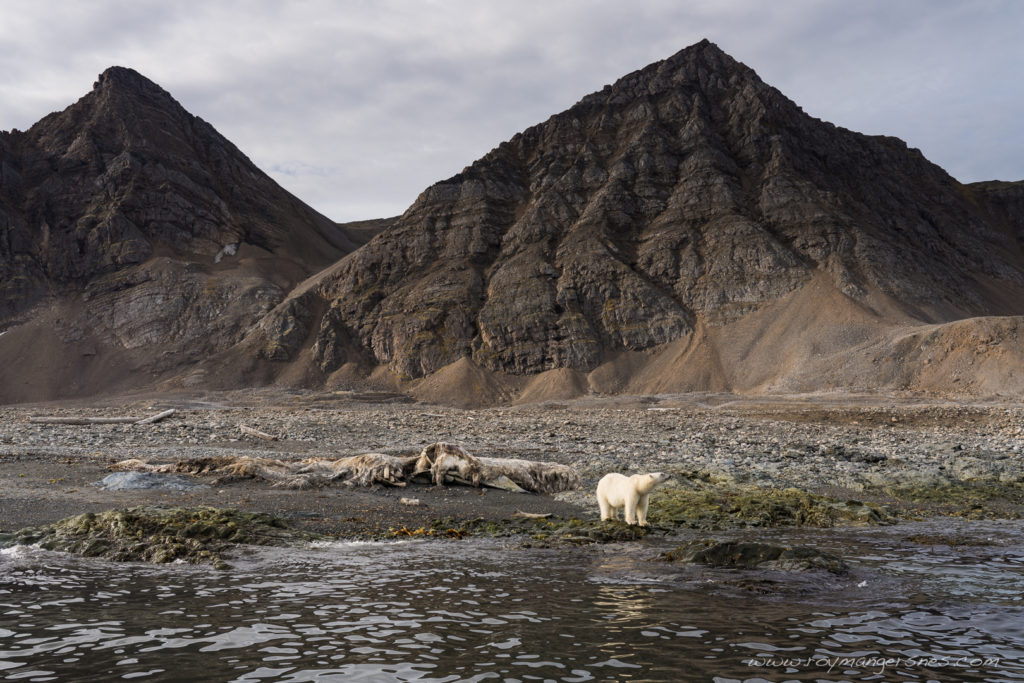 Afterwards we continued north and into Smeerenburg. The clouds were low and we got some nice landscape images here before dinner. During the evening and night we traveled east and north towards the pack ice. 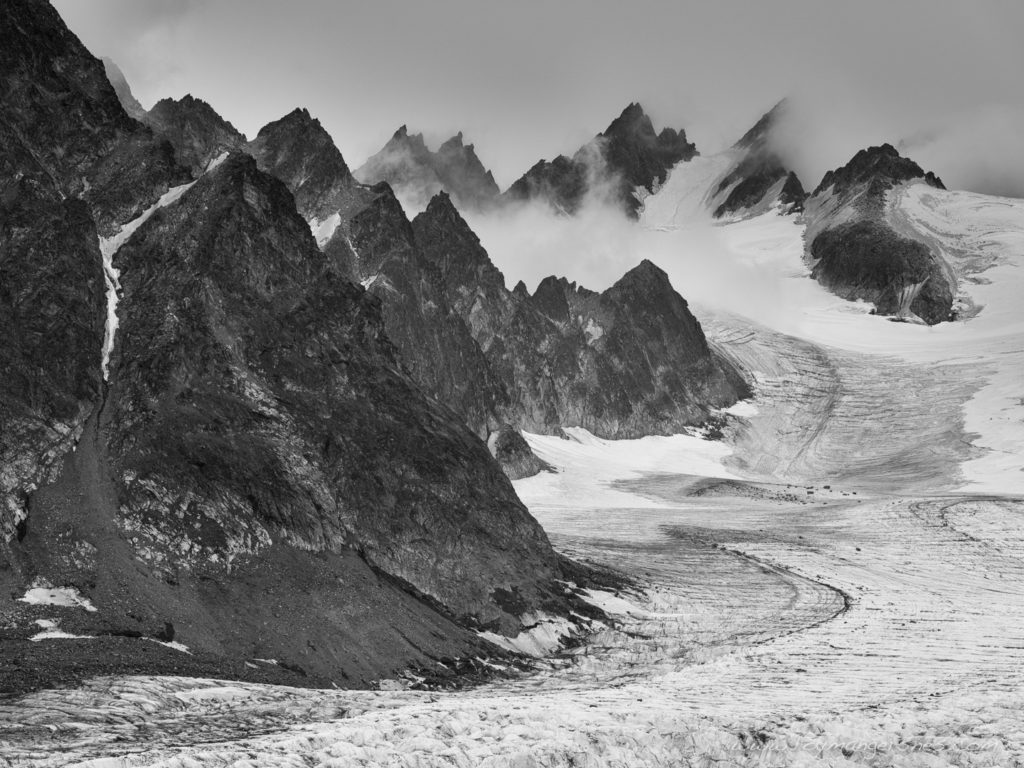 Day 3 – 6.8.2020 Mid day we arrived at the ice, but some fog in the area made it hard to see. We knew we were in a good spot so we started following the ice north and east as we searched for wildlife. Bearded seals and Harp seals were seen, but the fog got thicker and made it hard for us to see any further than the closest ice edge. 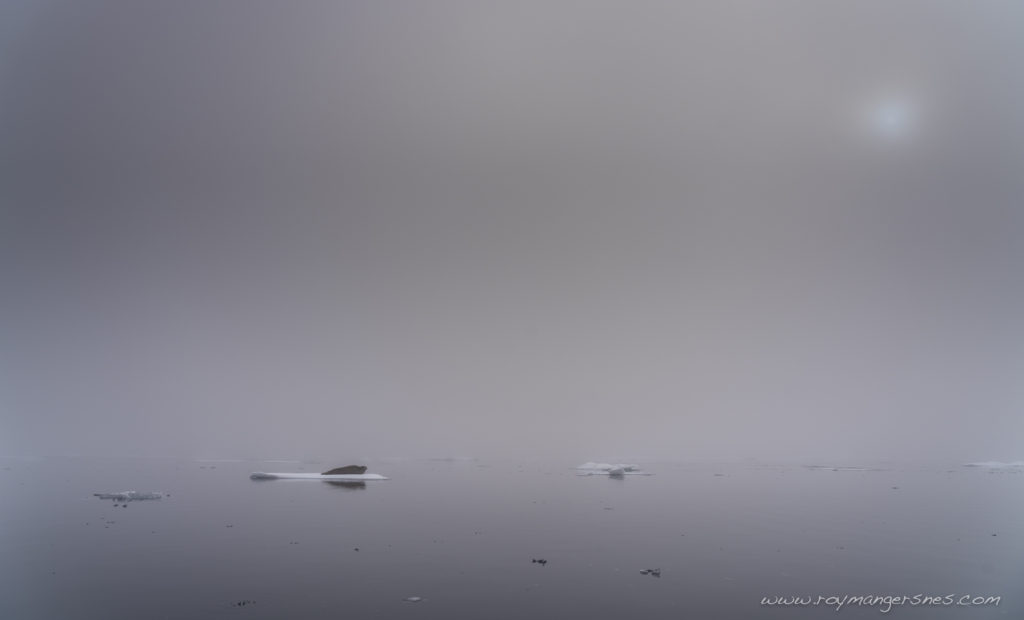 Day 4 – 7.8.2020 During the night and early morning we navigated south again and through Sjuøyene, then heading east and up on the other side of the ice sheet. Just before breakfast we had a nice encounter with a group of 5 walrus on the ice, including two small cubs. We photographed them from the ship with Sjuøyene in the background. Later, as we sailed north we also photographed bearded seals on ice and as the ice floes got bigger we had some amazing light coming through the fog. Everyone was on deck shooting this very special place up in the packice. Old polar bear tracks were seen on an ice floe, but the King of the Arctic stayed hidden in the thick fog.

Day 5 – 8.8.2020 During the morning we were pushed south by the ice and passed close by Karl XII Island. The fog lifted and it was dead calm so we decided to lower the zodiacs and go for a cruise. It was a beautiful day and we enjoyed the scenery as well as the birds in the area.

The rest of the day was spent heading east.

Day 6 – 9.8.2020 As expected the fog lifted near the ice cap of Kvitøya and we spent the first hours of the day in the zodiacs cruising along the coast. The midnight sun lit the glacier and we were greeted by large groups of Walrus. We only arrived back onboard the Origo at 4:30 in the morning. 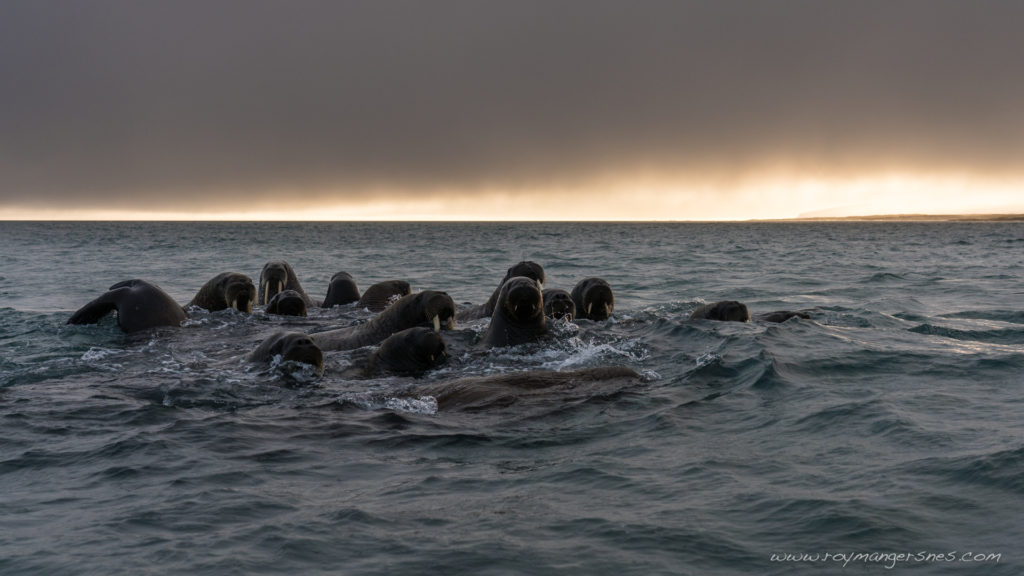 During the morning and day we sailed south along Austfonna glacier, the second largest glacier front in the world. Before dinner we arrived at a section that is known for its amazing glacier waterfalls. 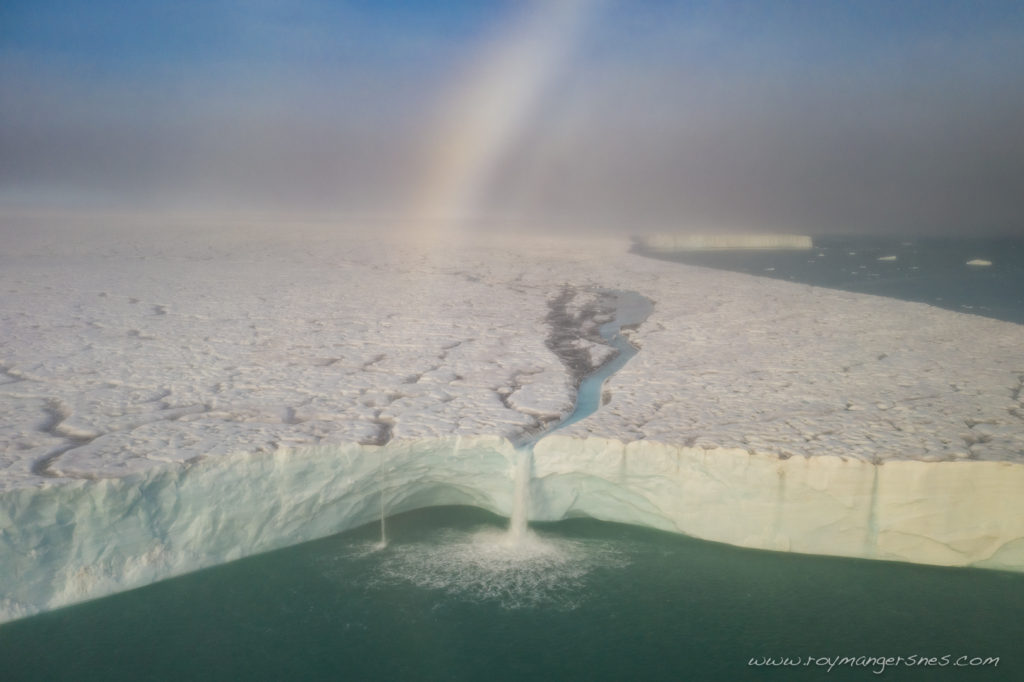 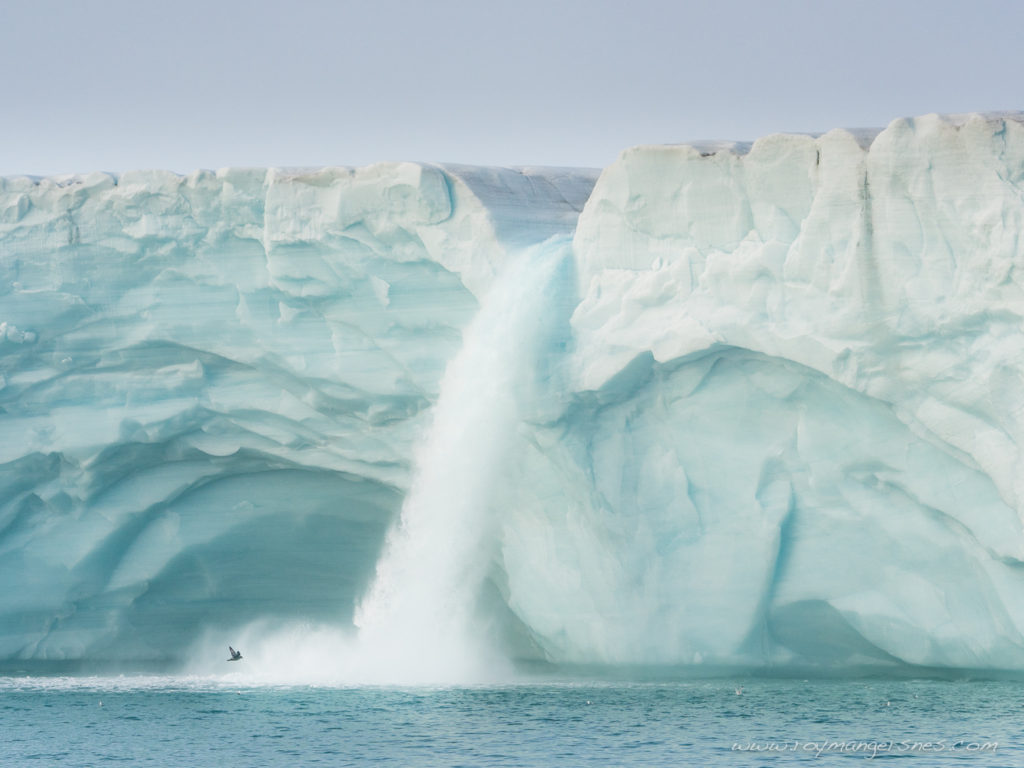 Day 7 – 10.8.2020 From midnight and until 5 in the morning we had a great landing in Hinlopen with Walrus. There were approximately 200 animals on the beach and in the water, and many of them were very curious. It is such a privilege to see femals and cubs together and it was really nice to see that they were very relaxed around visitors. 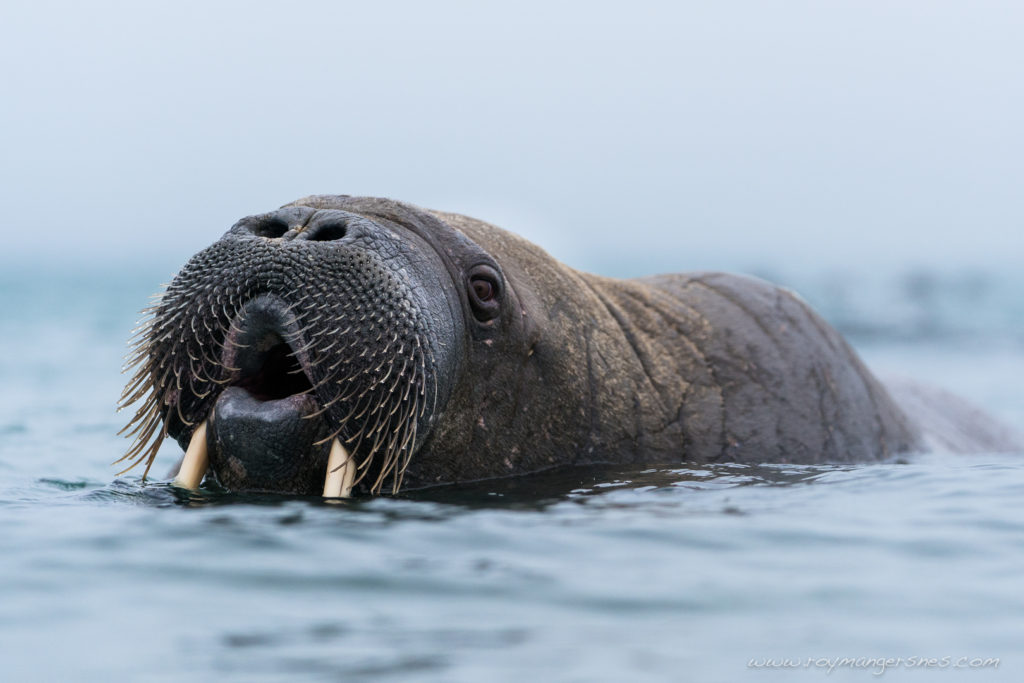 After lunch we anchored further north in Hinlopen and went out with zodiacs to the Alkefjellet bird cliff. The visibility was fairly good and we enjoyed several hours with the birds along the cliff and also a couple of foxes. We were lucky and saw many Brünnich guillemot chicks jumping from the cliff, and also Glaucous gull hunting them in mid air and on the water. 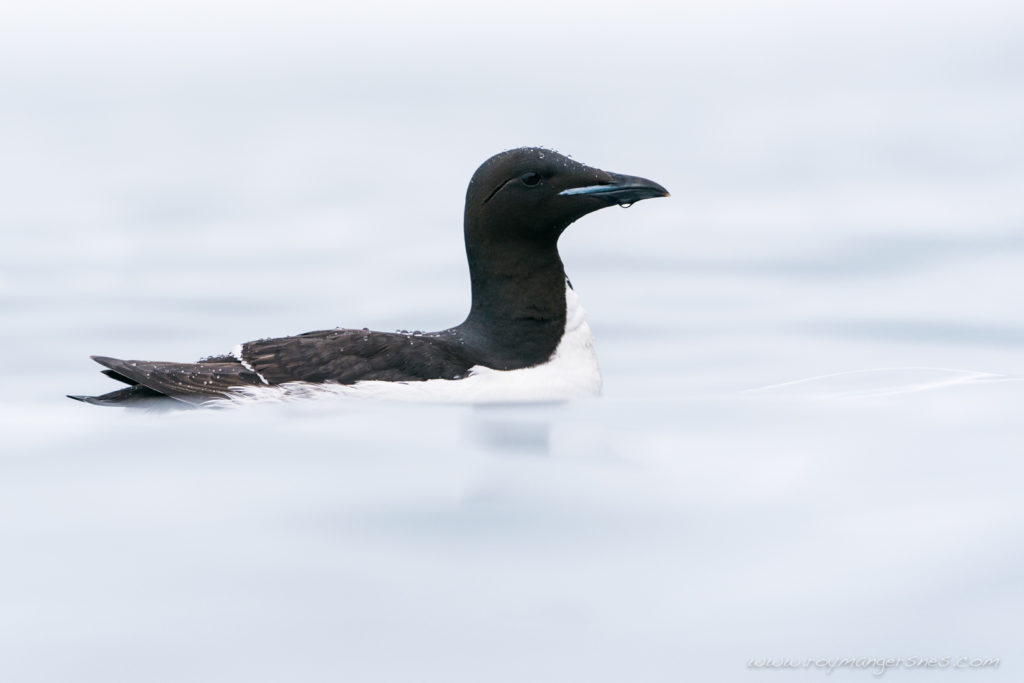 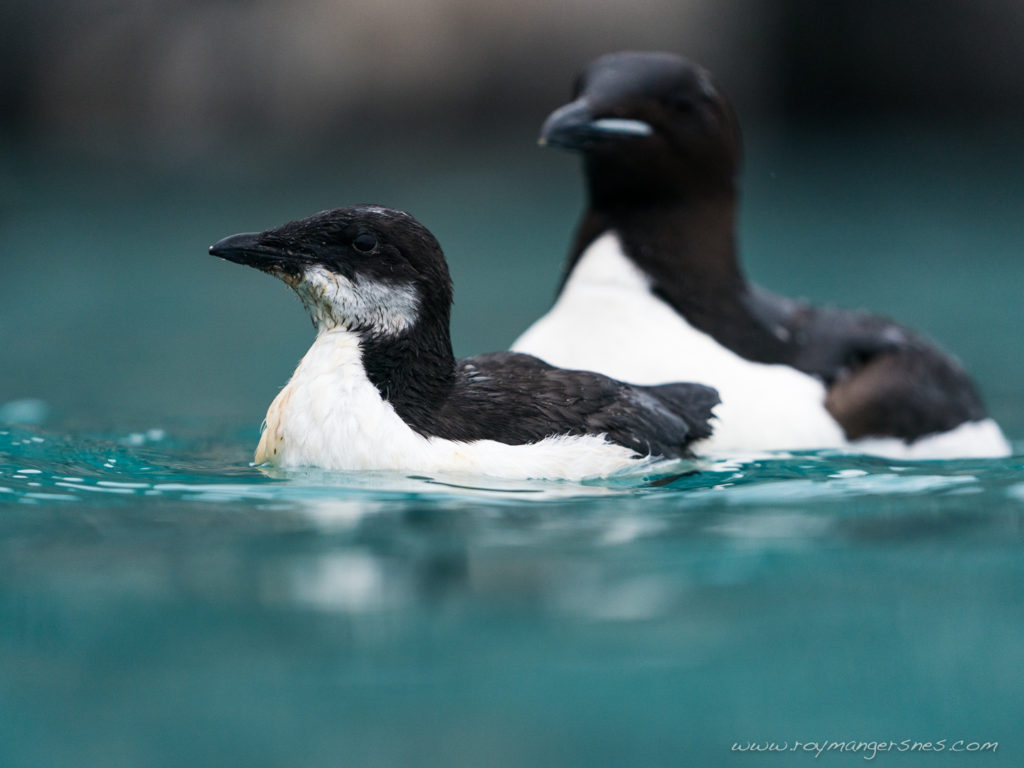 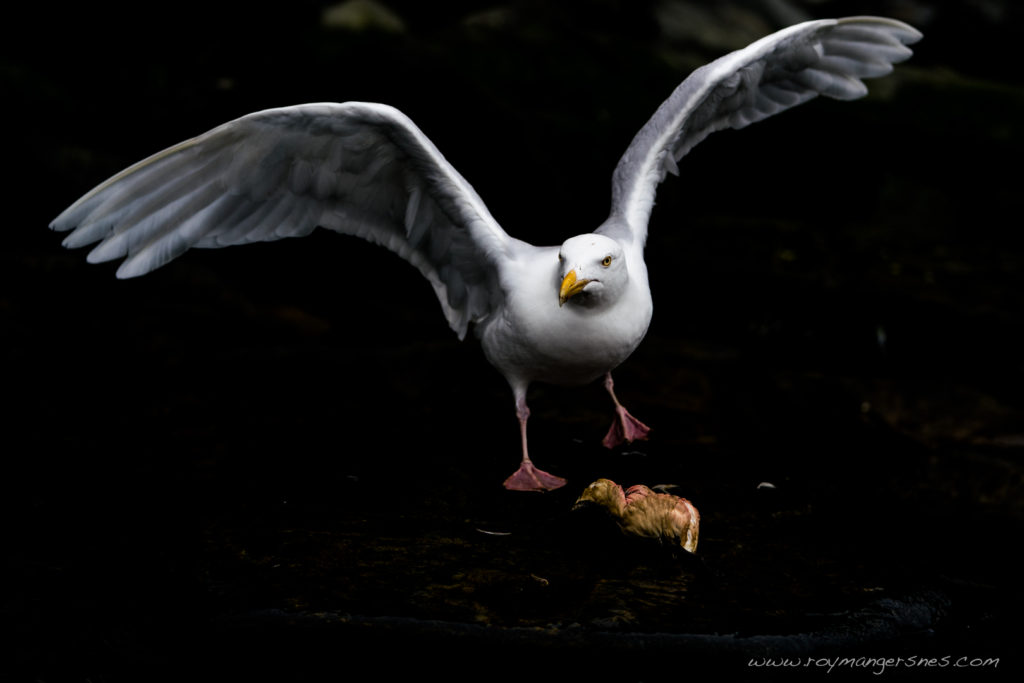 On the way back we visited a great blue iceberg with Kittywakes. 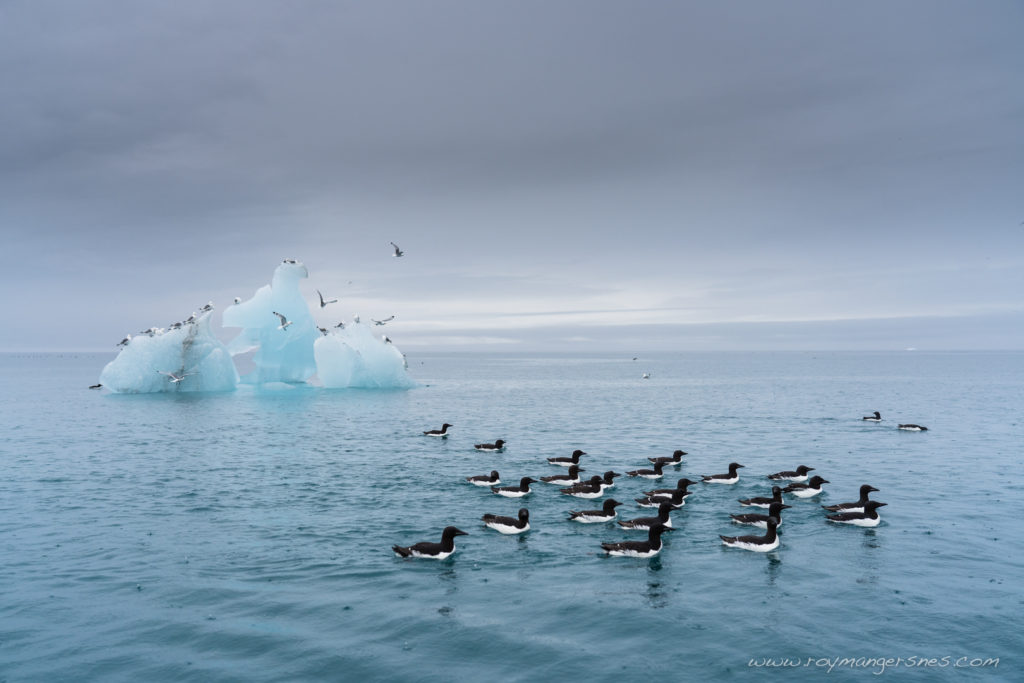 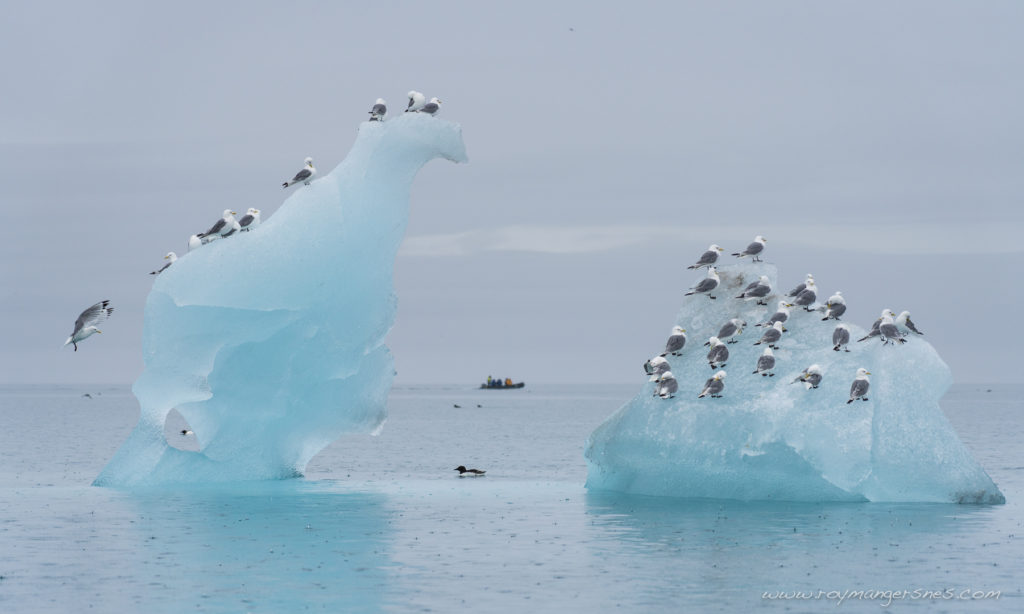 Day 8 – 11.8.2020 Early in the morning we arrived in Woodfjorden. The visibility was good and we saw several Blue whales feeding on our way in. It seemed there was a good food supply because we also spotted some Minke whales in the same area. As we came into Liefdefjorden we also got close to a feeding Humpback whale and another two Blue whales. 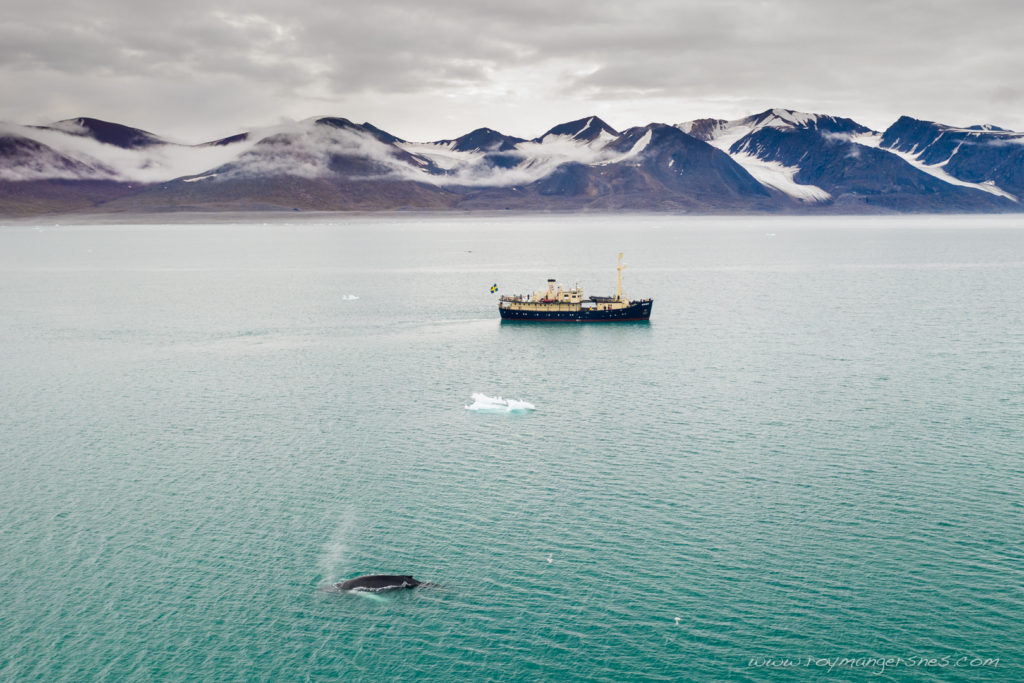 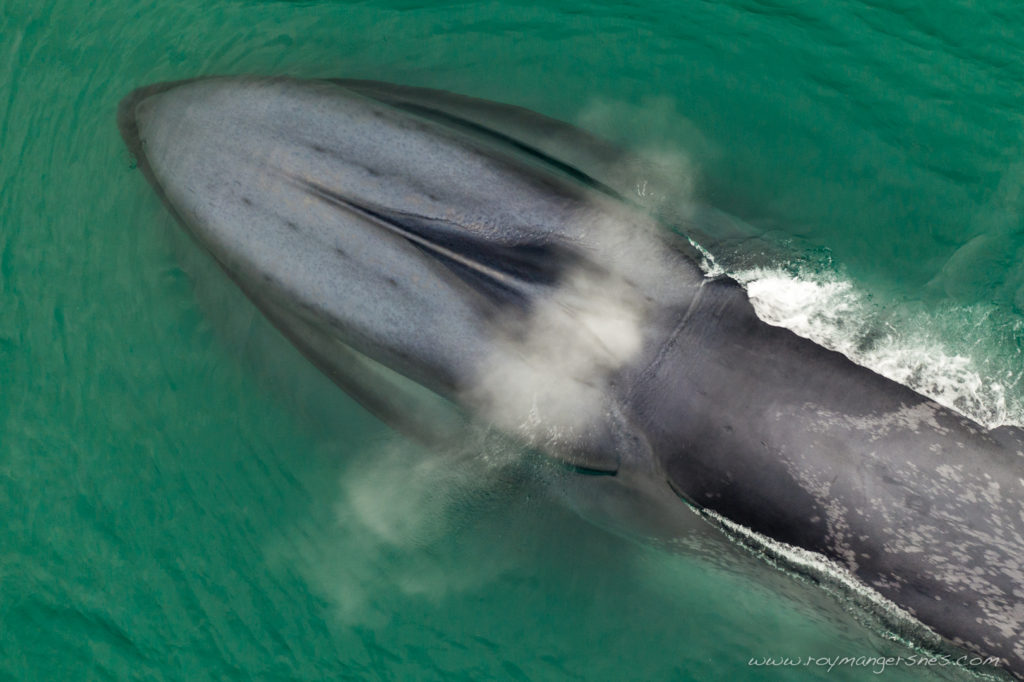 After lunch we went on a long zodiac cruise near the Monaco glacier and photographed birds near the icebergs and also near the glacier. We also found some amazing ice structures that we photographed. A young Ringed seal was seen close to one of the zodiacs and gave the photographers a nice show. 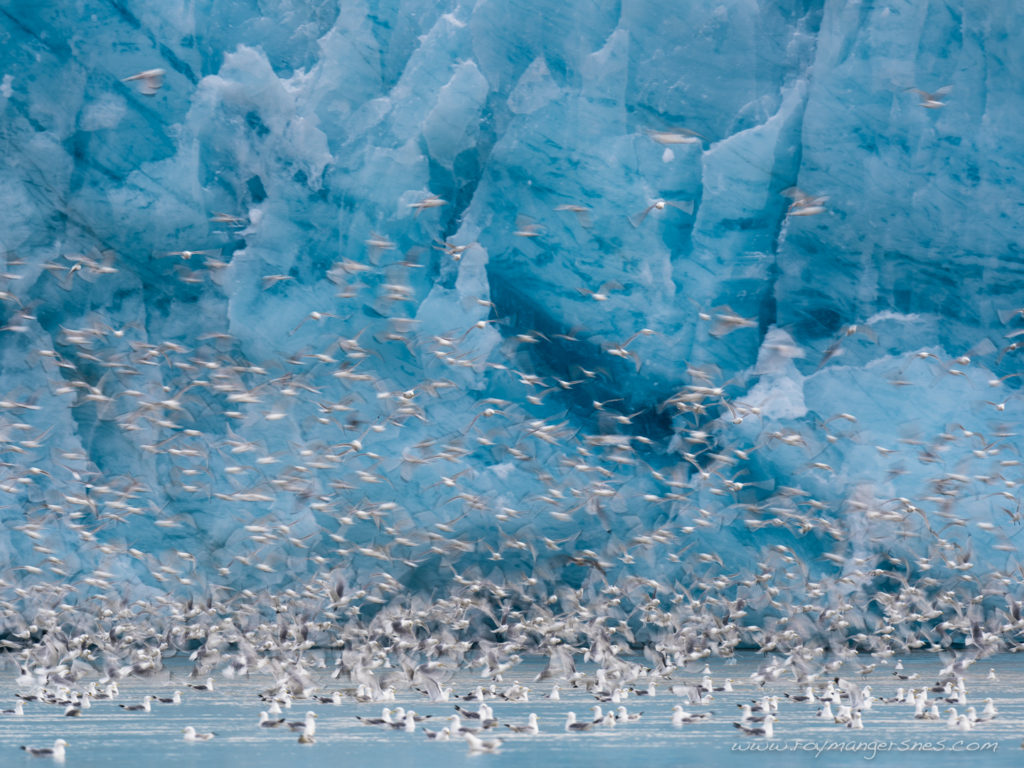 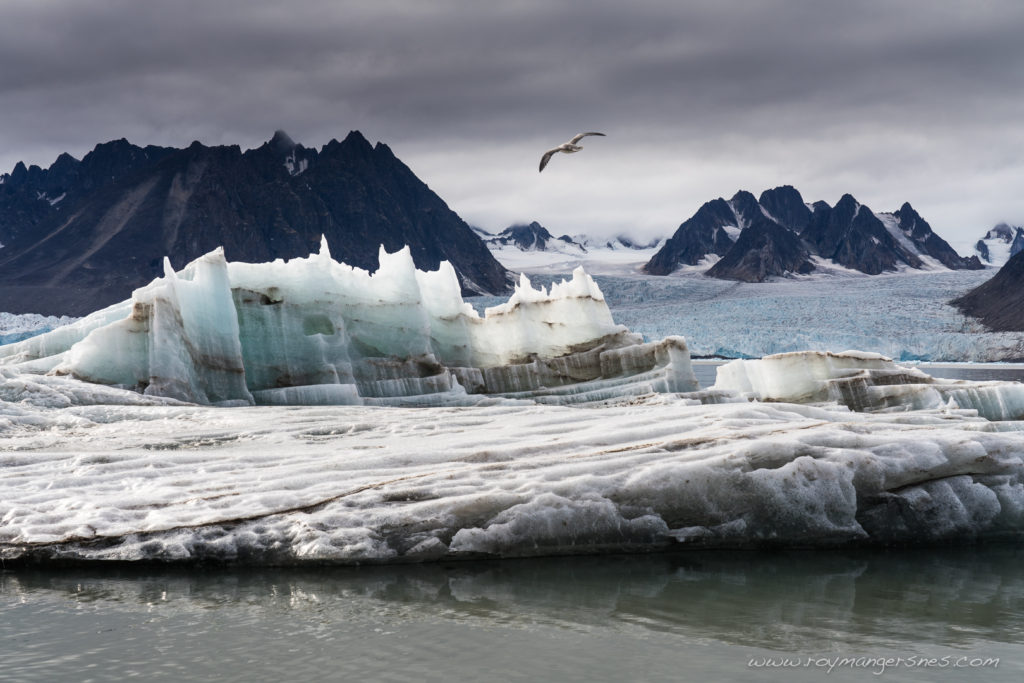 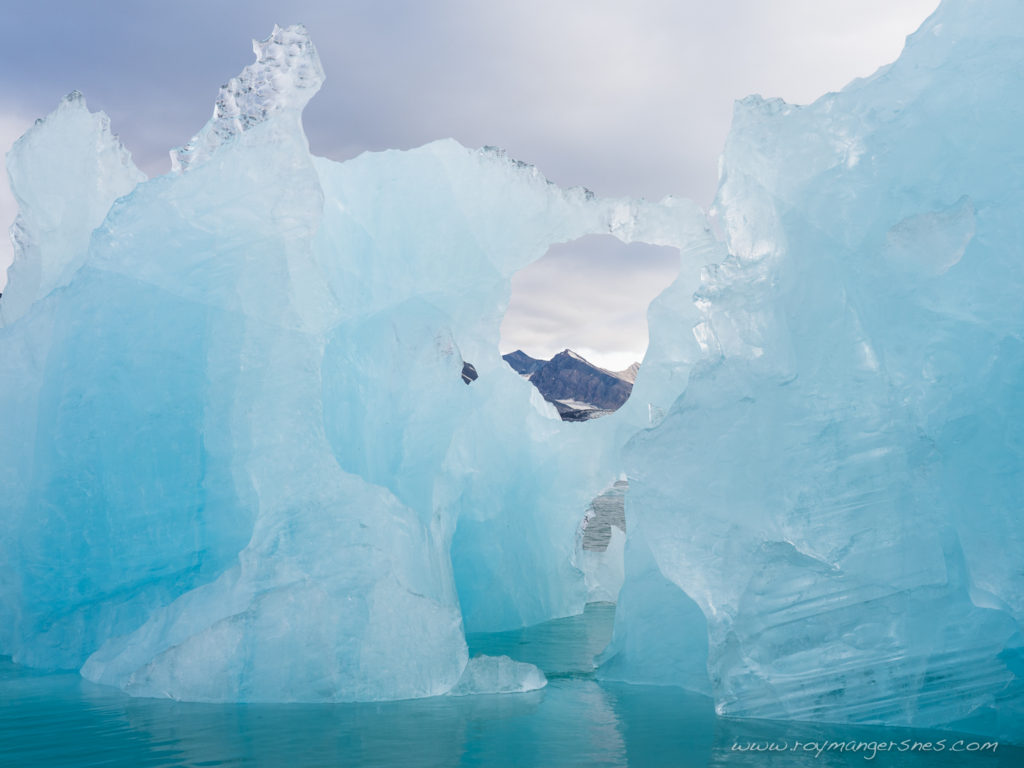 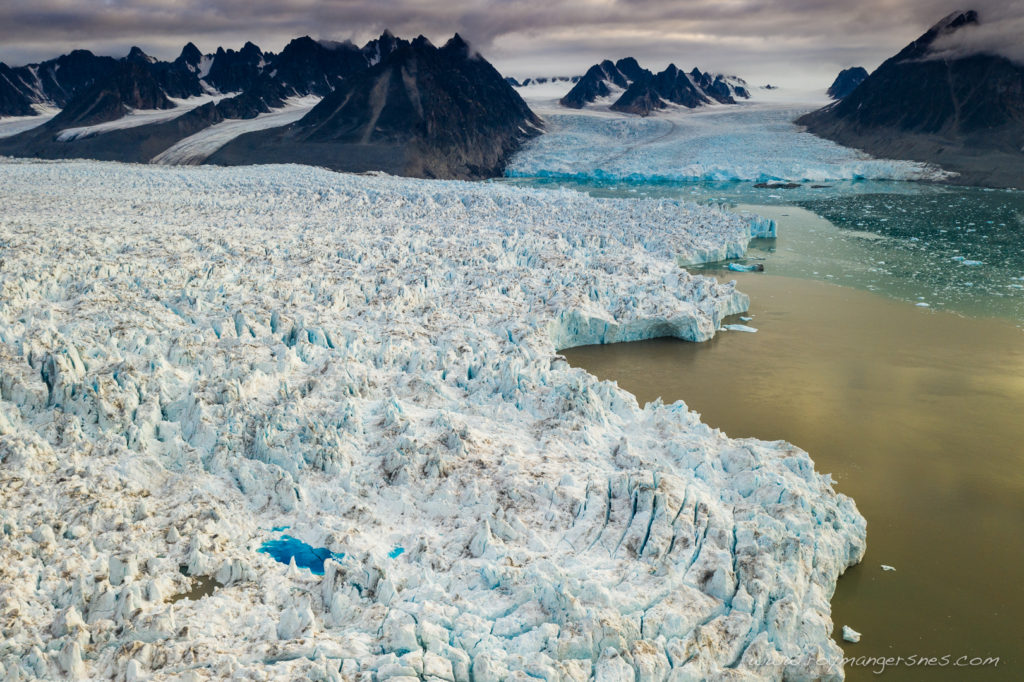 During the evening and early night we moved out of the fjord and saw up to 20 Minke whales and a Fin whale on the way out, As we headed into the beautiful night light we spotted several Blue whales on the horizon and changed our course to have a closer look.

Day 9 – 12.8.2020 At 03:00 in the morning we spent some time with two Blue whales feeding in amazing light and got to see some very interesting behavior as they rolled on their side close to our ship. The light was amazing in during the night and everyone was enjoying this spectacle from deck. 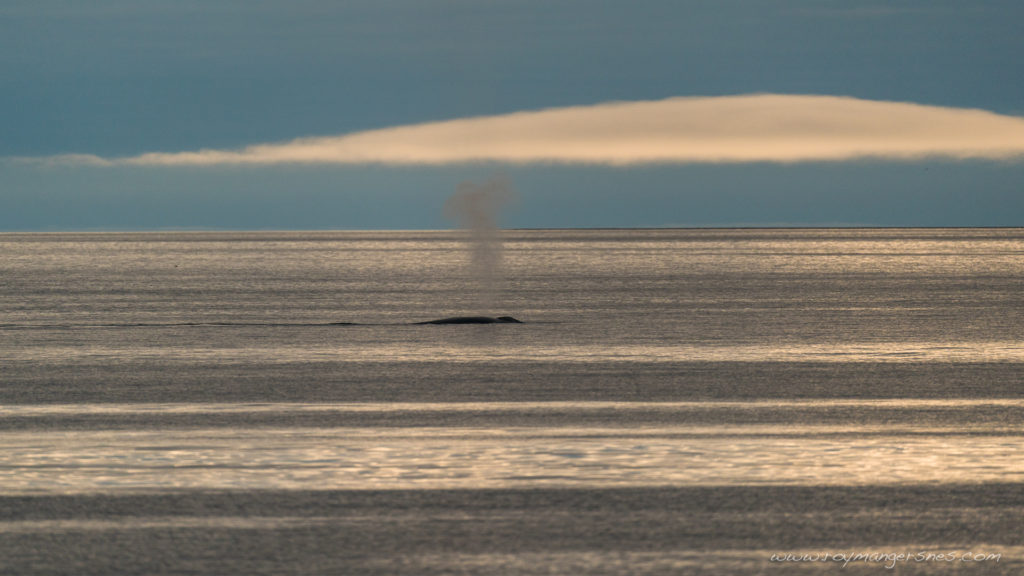 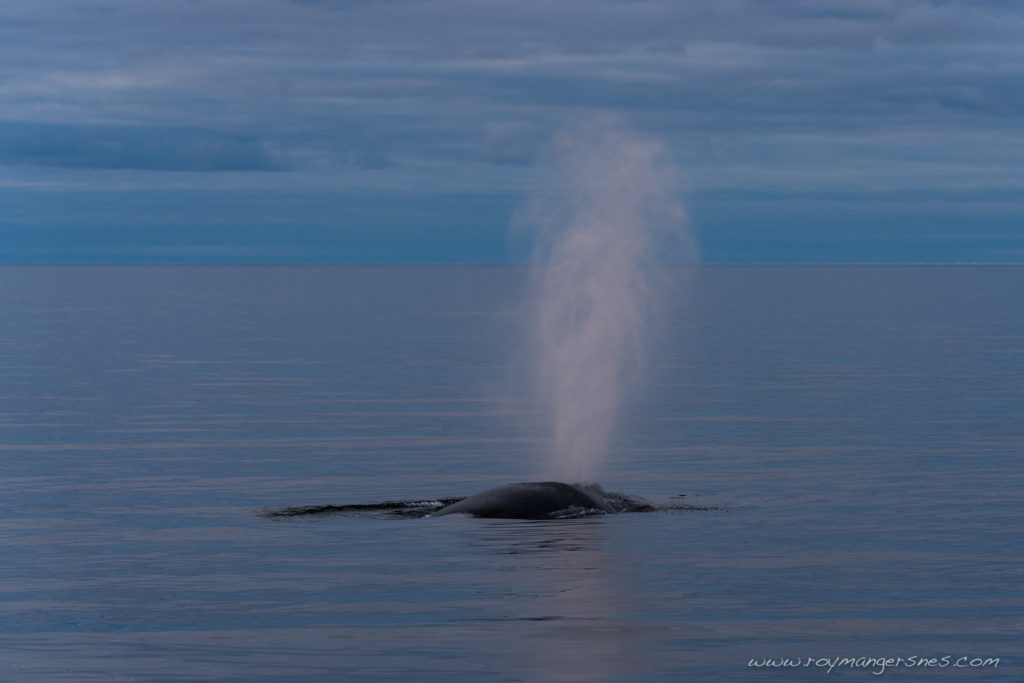 After breakfast we arrived in Raudfjorden and from the ship we saw two Polar bears under a bird cliff. We got a really nice encounter with the bears. One of them spent a lot of time feeding on Mountain sorrel, filling its stomach with this plant. Apparently it contains a lot of vitamin C and might have a preventive effect on scurvy. 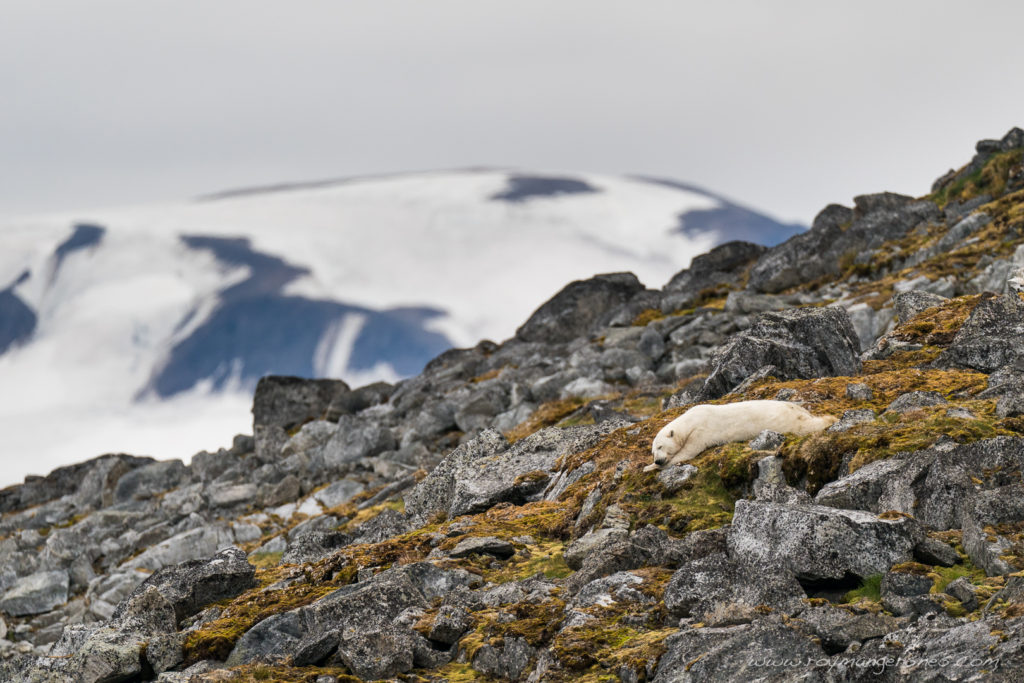 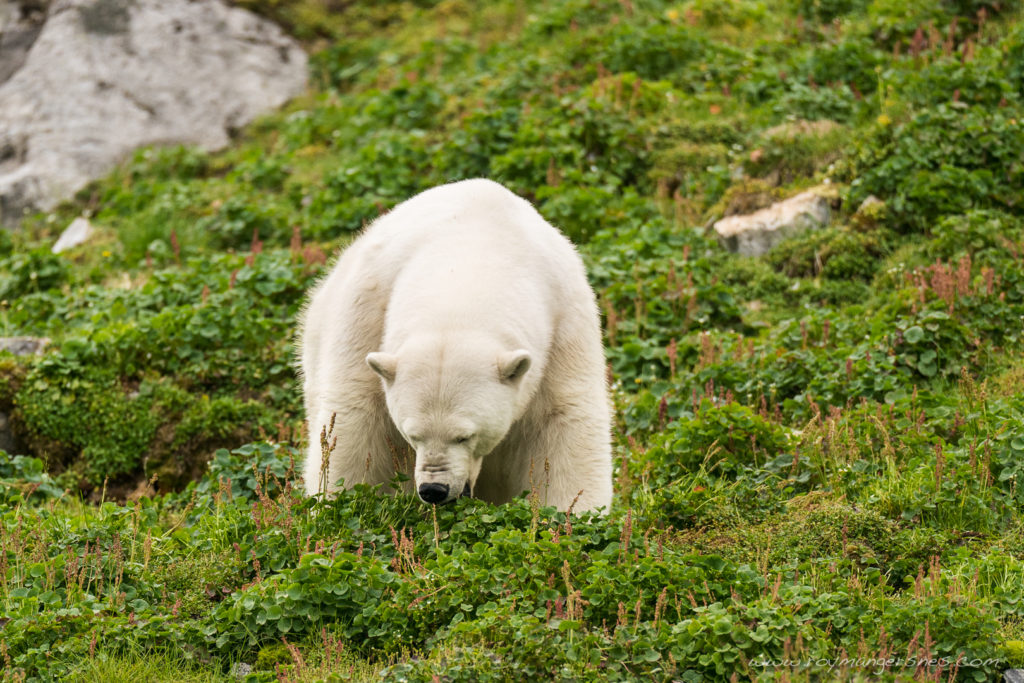 Day 10 – 13.8.2020 After breakfast we did a landing at Alkhornet in Isfjorden. The wind and swell had dropped but we had some rain as we went out. During the landing we spotted two foxes from afar and had some nice close encounters with the local Svalbard reindeer. The males were looking good and getting ready for the rut later in September. 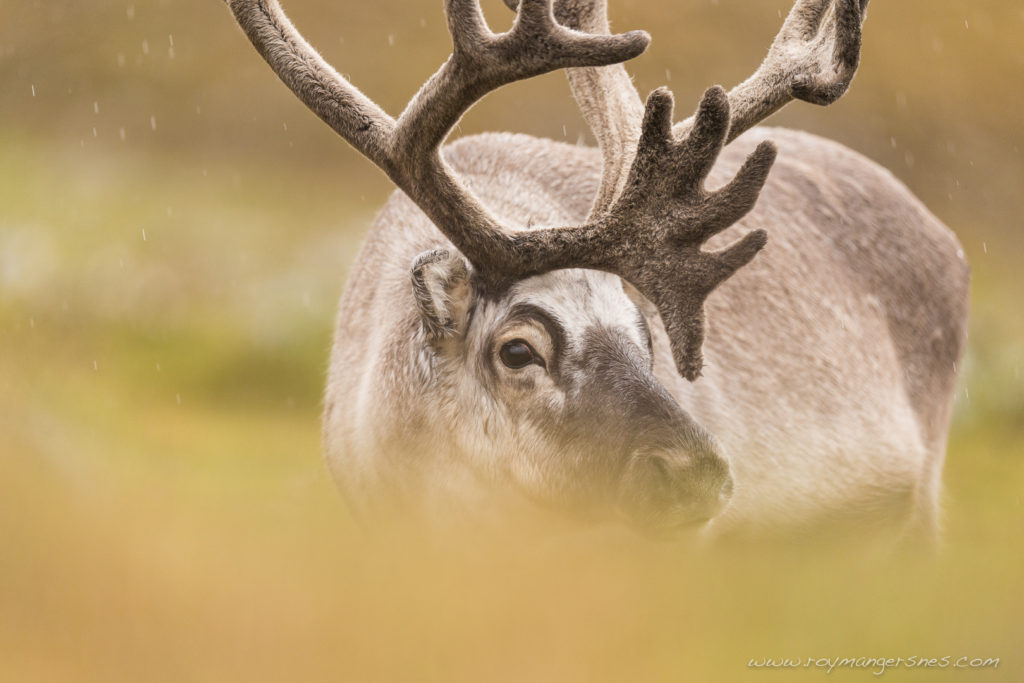 After lunch we moved further into Isfjorden where we had our last zodiac outing of the trip. Most of the time was spent photographing the amazing icebergs in the area.

The ship arrived in Longyearbyen late that evening for our last night onboard.

Our fourth Svalbard expedition of 2020 was yet another great success and covid-free. We thank both guests and partners for trusting us in providing a safe expedition in these difficult times!