Our late July expedition to Svalbard has become a classic, and we were really looking forward to this trip. The conditions were very good with ice almost at the same latitude as during our June expedition. Several of our returning clients were on this trip as well as many fresh names from 6 different nations. This time the trip was hosted by Roy with Martin as our guide of choice.

Day 0 – 14.07.2013 As always we recommend our guest to arrive a day or two before the departure to make sure all the luggage arrive safely and also get some time to photograph around Longyearbyen. The flight in was amazing and we started shooting even before setting our feet in the Arctic. The night was spent searching for Arctic foxes, which turned out to be a good choice. 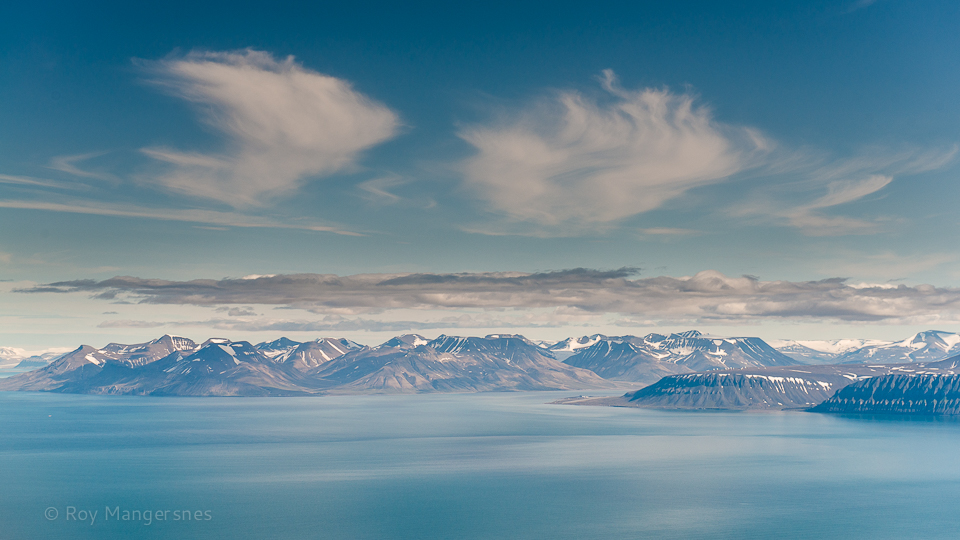 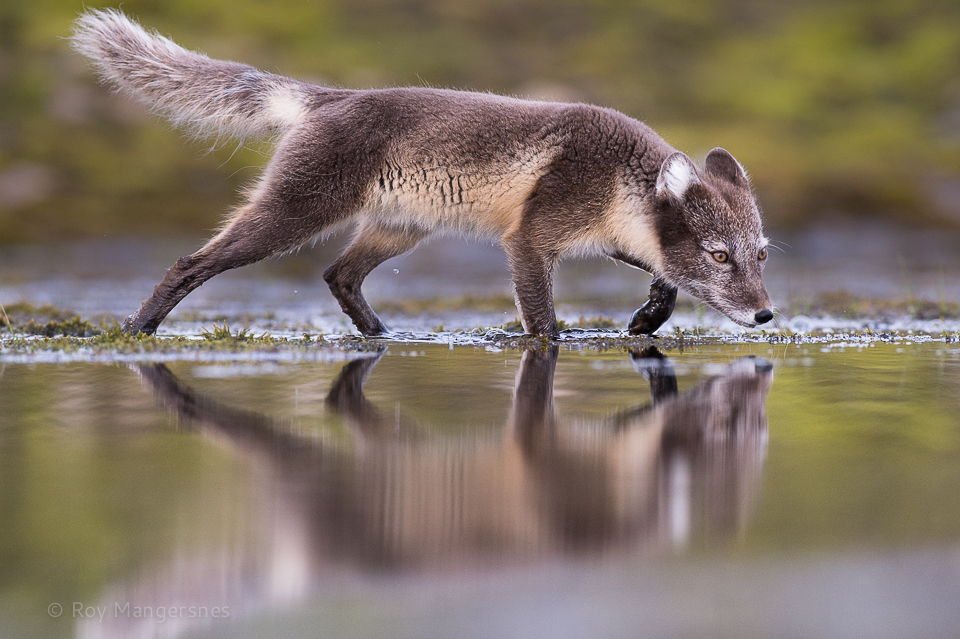 Day 1 – 15.07.2013 Leaving Longyearbyen in the evening the wind was already picking up and as we headed up along Kong Karls Forland the northerly swell started rocking the M/S Origo. During the night we made the executive decision to find shelter in Lillehöökfjorden.

Day 2 – 16.07.2013 The guests were given a couple of hours sleep in the sheltered bay before we embarked on our first Zodiac cruise along the magnificent glacier. The blue ice covered parts of the bay, as the glacier kept on calving around us. Hundreds of Kittiwakes gathered along the glacier front and we picked up our first seals, a Ringed and a young Bearded Seal on the ice. At lunch we started heading out the fjord, only to stop briefly for a few Puffin shots at a local bird cliff. Not among the most common birds on Spitsbergen, but surely one of the most popular among our guests. In the evening we entered the open ocean again and made our way north. The wind dropped a little but the waves rocked us to sleep. 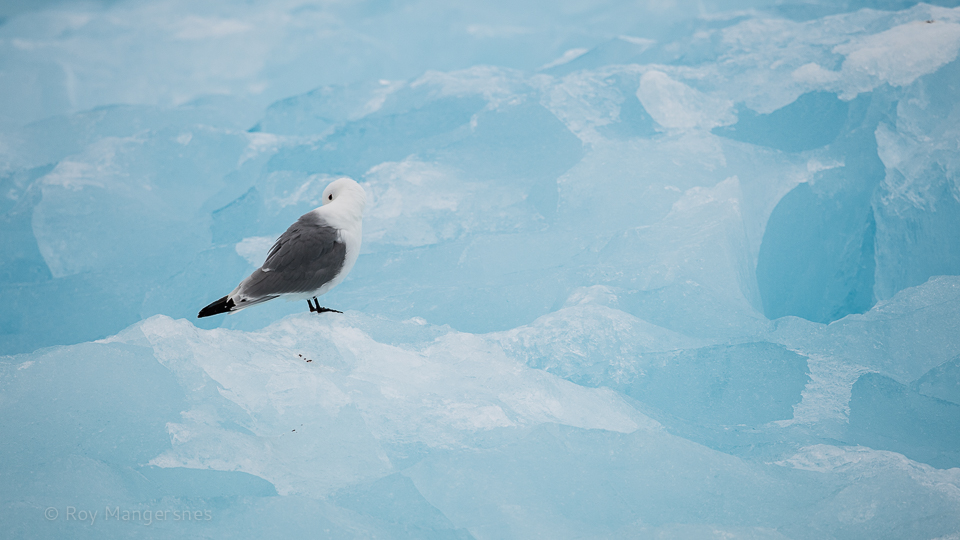 Day 3 – 17.07.2013 At breakfast we entered the sea ice on the north side of Spitsbergen. The swell was still hitting us from the northwest but the ice reduced the impact, and the forecast for the next few days were very promising. The binoculars came out and we started searching for the main target. 20 minutes later we spotted the first Polar Bear on the ice. The wind and the swell made it hard for us to keep up with the animal as he moved unaffected by the conditions along the ice edge. As he moved into the horizon we went back to searching and 10 minutes later we had our second bear of the morning. This guy was also quit active and moved along the rolling ice floes. After seeing him of we got ready for lunch, but before the meal was on the table our third Polar Bear of the morning appeared. A big, relaxed male was laying on an ice floe. Remains of blood the nearby ice gave us a clue to the relaxed posture, as he probably finished his meal in the last couple of days and rested happily on the sea ice. 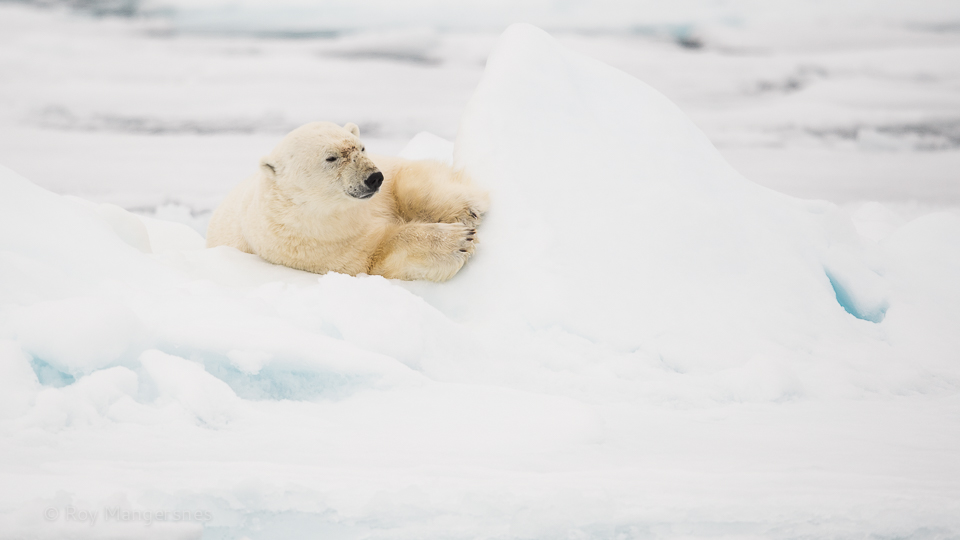 This would be the day of the Arctic king, as we had just finished our lunch when another Polar Bear was seen on the ice. The swell had dropped and the weather was looking promising. From far away we could see two animals and with the sea ice being open and calm we decided to go in with Zodiaks. The next few hours were like taken from a dream. The two animals turned out to be a large male and a huge female on a kill, and they were being amorous! From the low angle of the Zodiac we would see them share a meal, play fight on the ice and in water, cuddle and play hide and seek, all as the light was getting better and better. The male was on his hind legs “asking the female to dance”, and she would get up as well and they gave us unique insight to their most intimate life. At some point we went back for dinner and came out later as the sun was low on the horizon to spend a few more hours with the animals. At one point we believe they mated behind a snow-covered iceberg, and as they lay down to rest in the middle of the night we left them alone and went back to the ship. The M/S Origo had been drifting and ended up close to the kill from earlier in the day. And while images were being downloaded the couple returned for the last pieces of meat and one last show for our guests. Day three and the expedition was already a success! 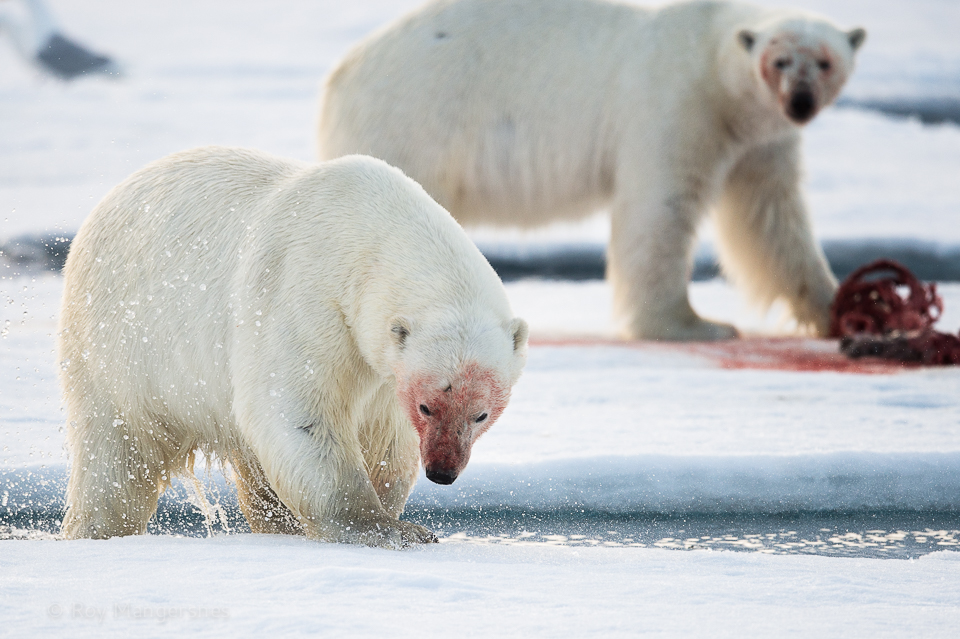 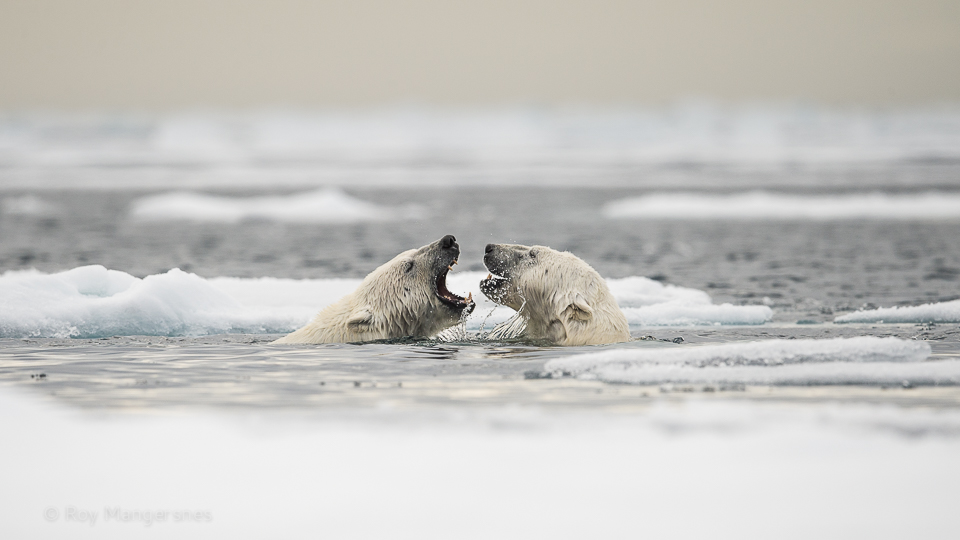 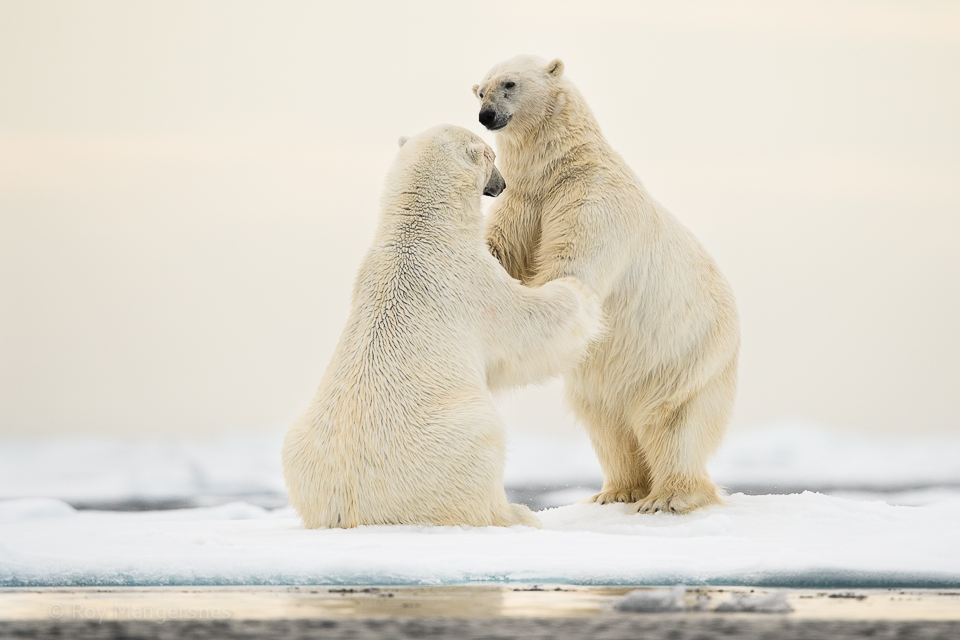 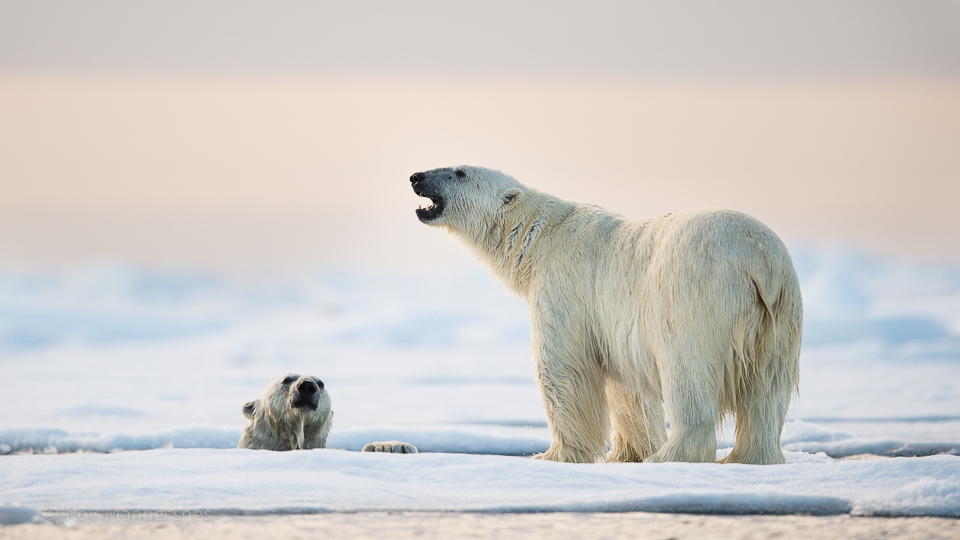 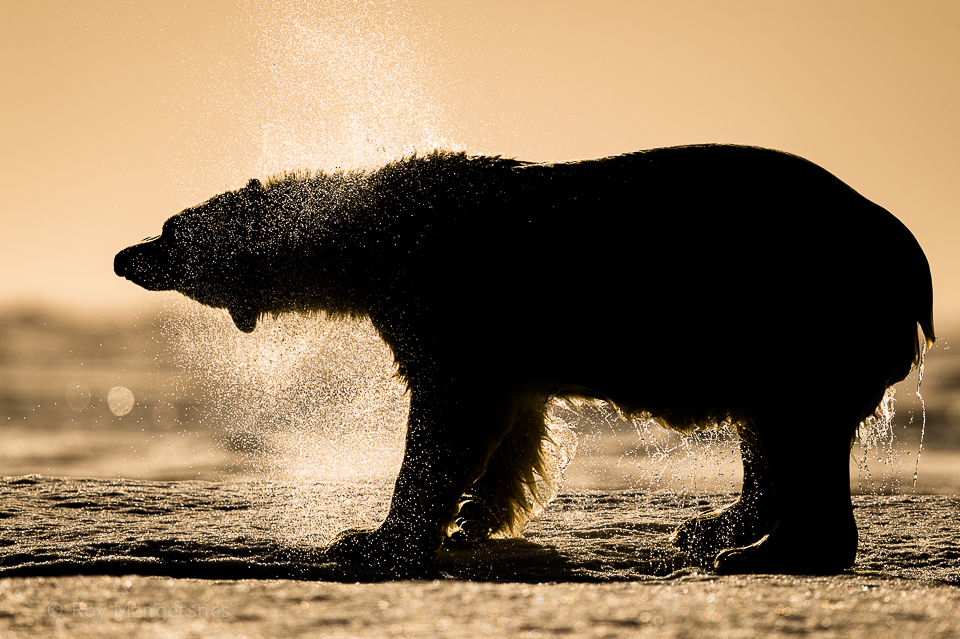 Day 4 – 18.07.2013 Early the next morning we found ourselves near an Island, ready to stretch our legs. We went with Zodiacs to visit the local Walruses, which counted 200 on the beach at the moment! Afterwards we landed on a nearby beach and went inland to find a Svalbard speciality – the Sabine’s Gull. After searching the area we found 6 birds near some shallow ponds. Getting down low on our stomachs we managed to get close enough for some nice framing and reflections. 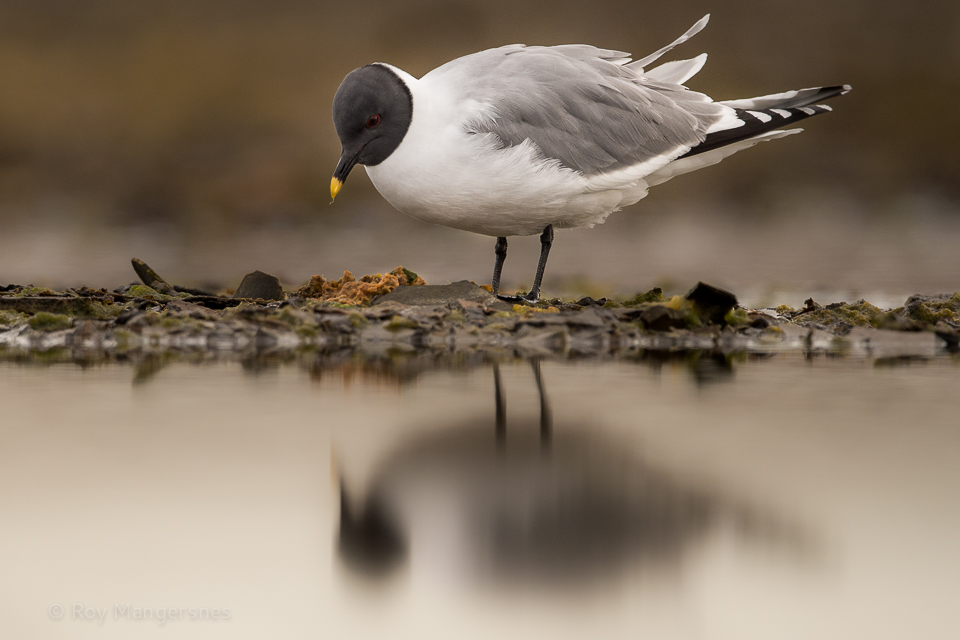 Sometime after lunch we found ourselves back in the ice, on the roof of Origo with binoculars. The conditions were perfect with no wind and beautiful soft light. Just after dinner we found the first bear of the day, and while stalking the animal another appeared. It seemed we hit Polar Bear hotspot again and one after the other came our way. Unfortunately none of them were curious about us and kept their distance. One animal circled the ship a couple of times and gave us some nice images with the Seven Islands in the background. 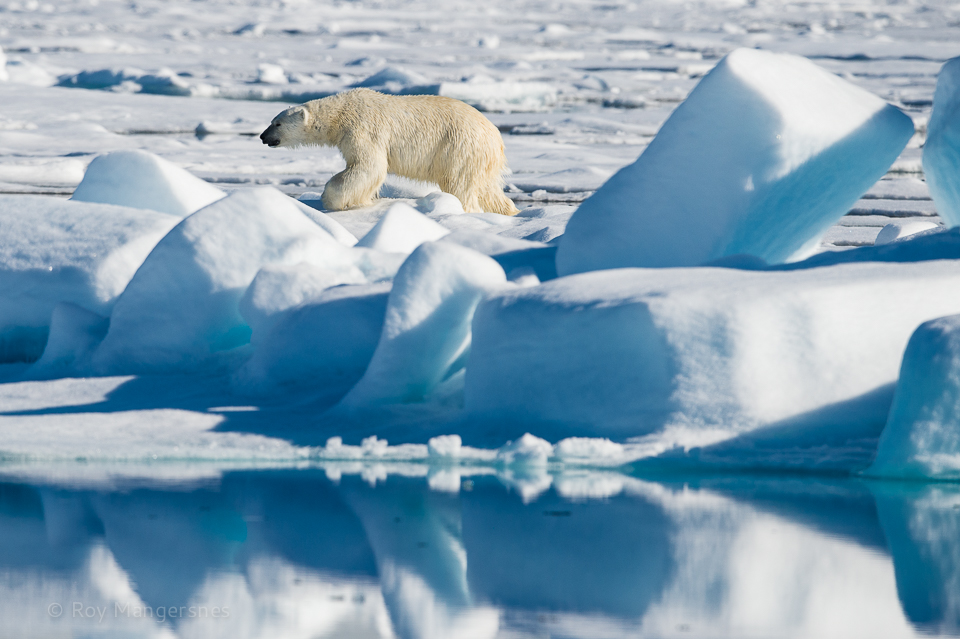 Day 5 – 19.07.2013 The morning started as the day before ended with great light and no wind. A couple of the guys decided to go for a swim at 81 degrees north, and jumped from the ship railing to the amusement of the others. With these conditions we didn’t want to leave and the rest of the day and night was spent searching for Polar Bear in the ice. There were a lot of Harp Seals around and a couple of more bears were found wandering the ice. During the night we went as far east as possible but north of Rijpfjorden we met an impenetrable wall of ice. 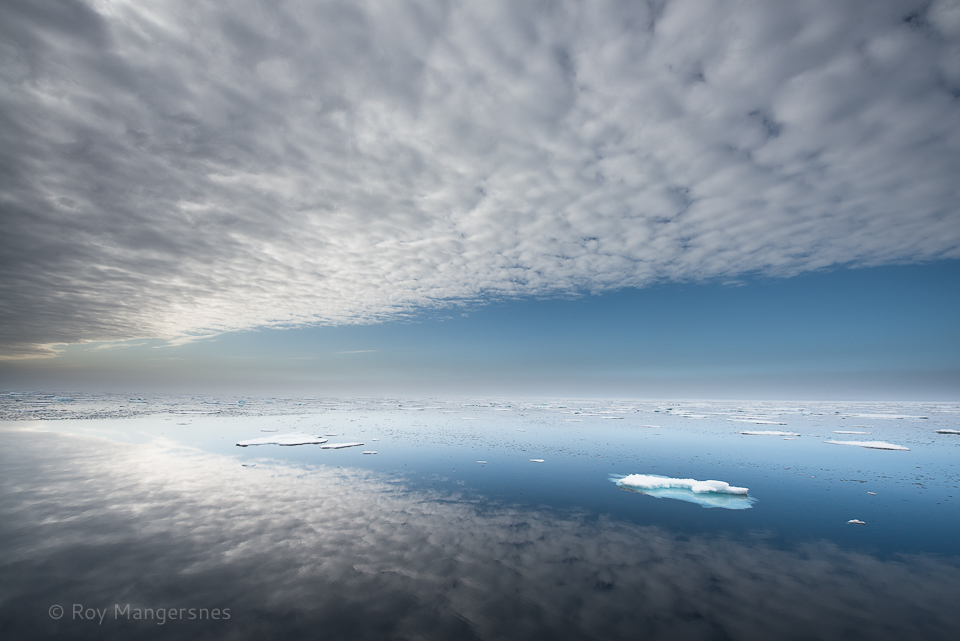 Day 6 – 20.07.2013 Early in the morning we headed towards Hinlopen and left the ice for now. Just before lunch we found the first whales of the trip. Four Humpbacks gave us a little show and not long after two Fin Whales showed themselves nicely. As we came further south the mist thickened and visibility was close to nothing. Even seabirds follow the ship was hard to see and the evening was spent searching the little bays in the south of Hinlopen for Polar Bears on blue ice (the icing on any cake/trip). 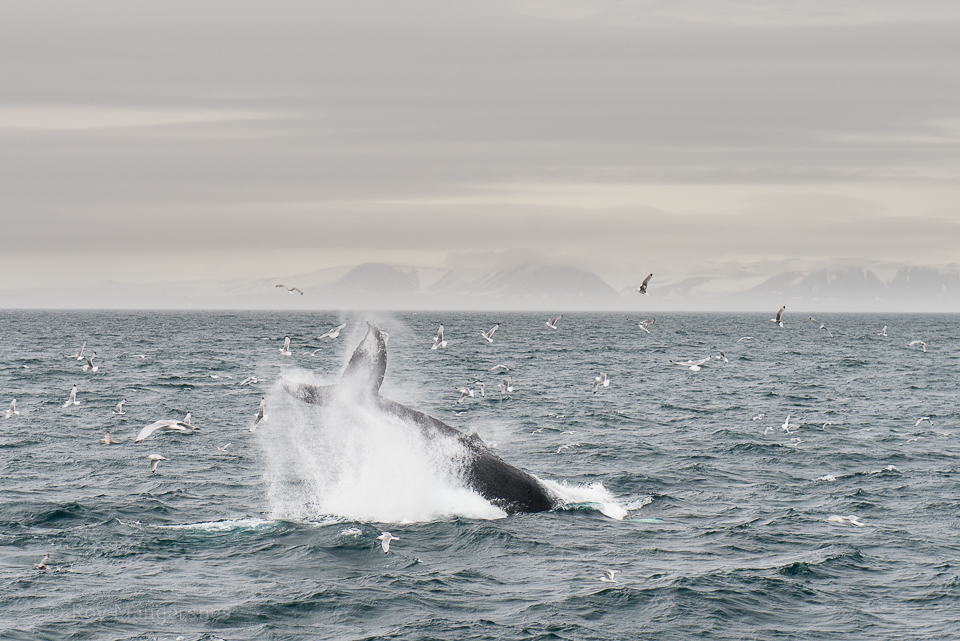 Day 7 – 21.07.2013 During the night we went east and found a nice anchoring point close to one of our favourite Walrus haulouts. The animals were there but so was a Polar Bear, watching the spit from a nice vantage point. We left him alone and went to find a different Walrus place. This was a new place for us, but it was still rewarding with some really nice big males present.
In the evening we arrived at our favourite bird cliff in Svalbard. The light wasn’t perfect but the seas were nice and calm. At first we photographed from M/S Origo, but later we entered the Zodiacs for a closer look. Several hours were spent among the thousands of Brünnichs´ Guillemots and during the night they became extremely curious and came within 0,5 meters from our boat. It sure is fun to work up close with wildlife using the widest lens! 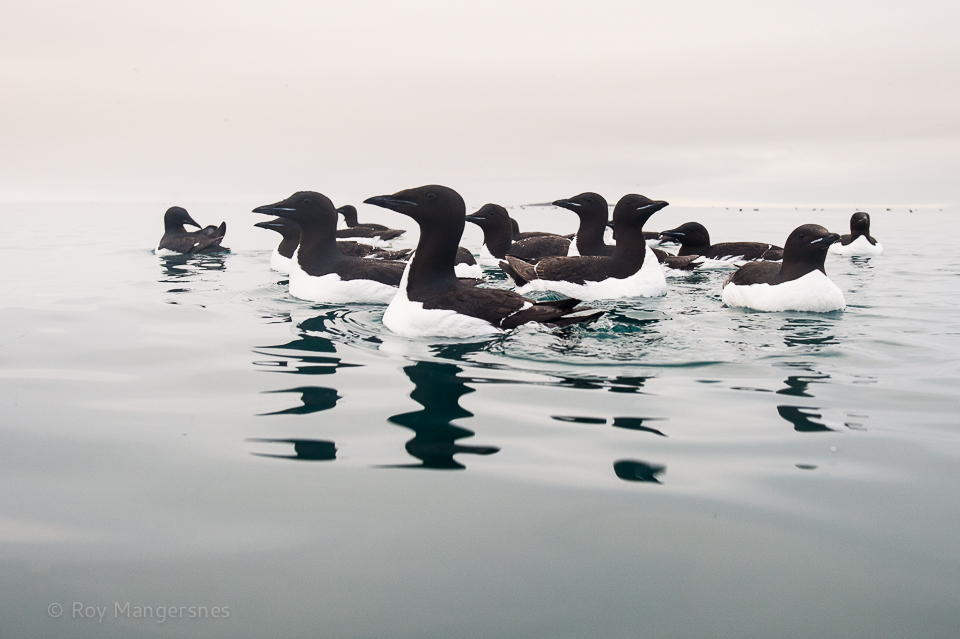 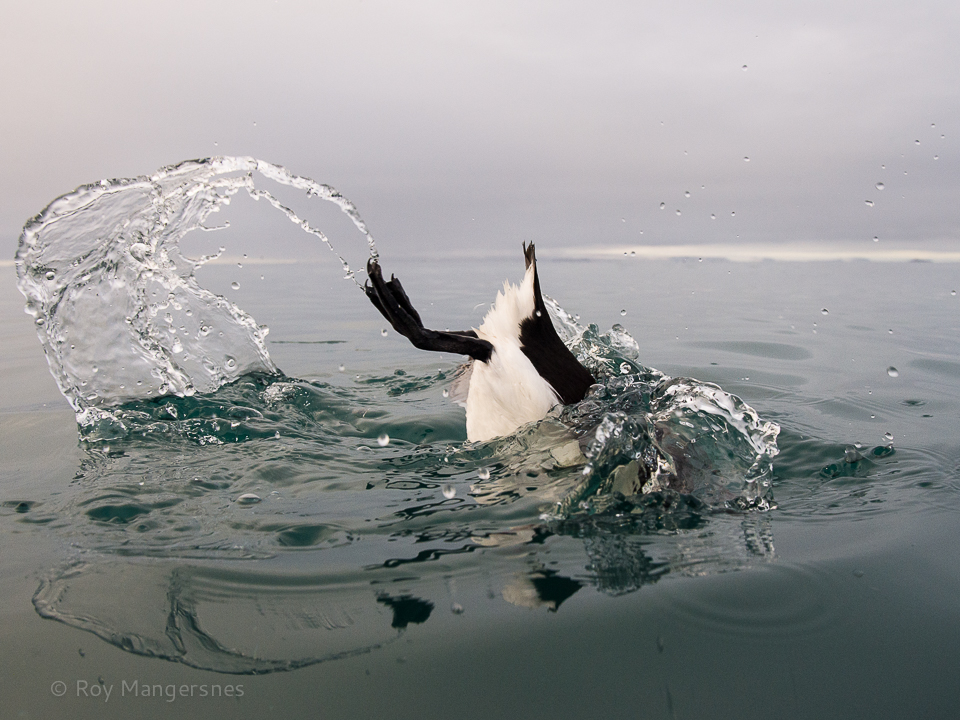 Day 8 – 22.07.2013 Just before lunch we arrived at Woodfjorden and was welcomes by one of the greatest creatures on earth. Well, actually The Greatest creature on earth – the Blue Whale. What a stunning animal! As we kept moving towards Liefdefjorden we spotted a Polar Bear on one of the local islands. He was obviously stranded but seemed extremely healthy and happy. The couple of hundred Arctic Terns on the island were not as happy as he was eating his way through the colony. 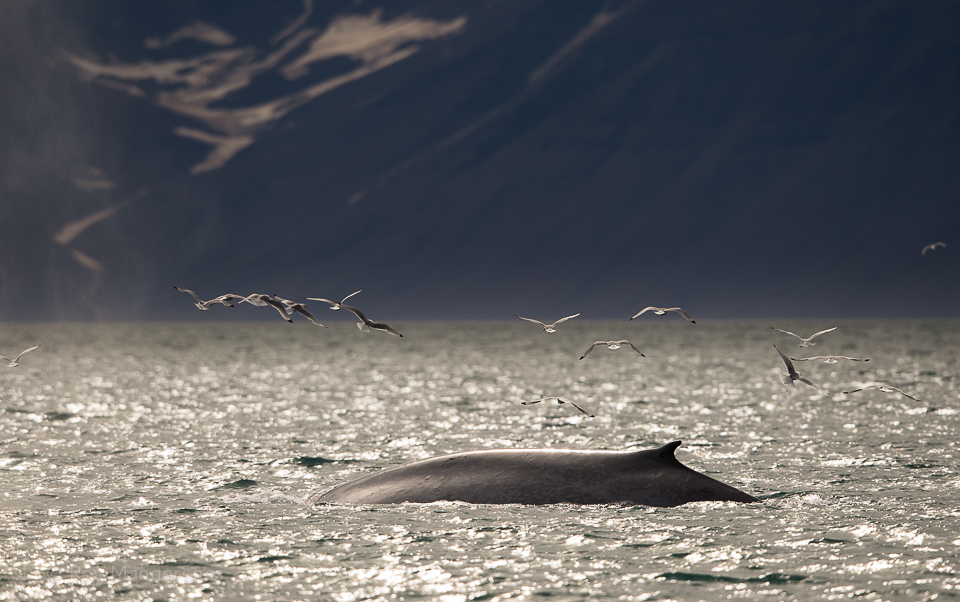 Later that evening we had a nice barbeque on the ship before entering the Zodiacs for a late evening cruise along the Monaco Glacier. There were heavy winds and a massive calving made navigating difficult. However the light was dramatic and the blue icebergs covered the bay. Hundreds of Kittiwake, Glaucous Gull, Arctic Tern and even Ivory Gulls were feeding among the ice, only disturbed by pirating Skuas. Most guests went back for an early night as the wind picked up, but a few kept on cruising into the night. They were rewarded with a beautiful Bearded Seal giving us some great images in the early morning. M/S Origo lifted anchor at 4 o’clock in the morning. 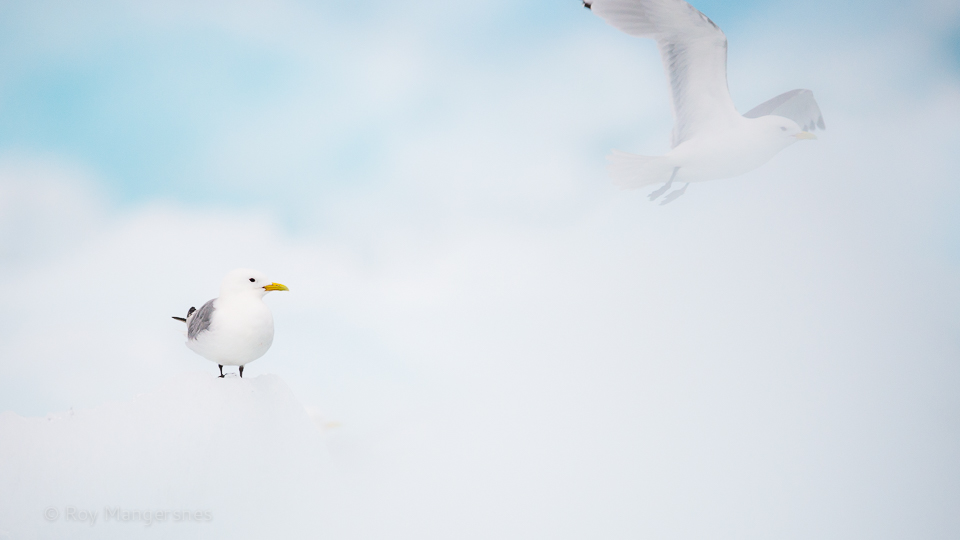 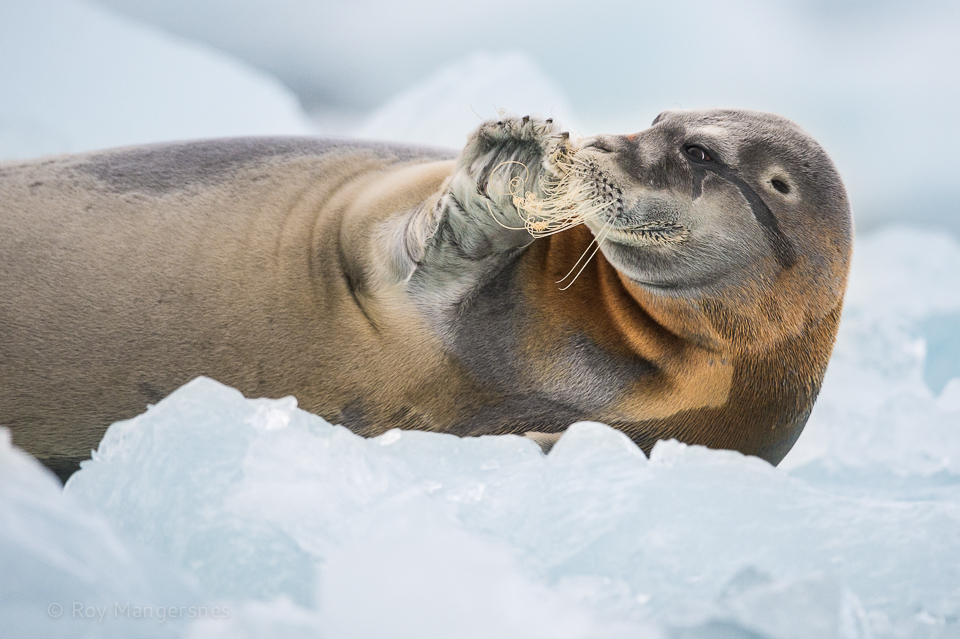 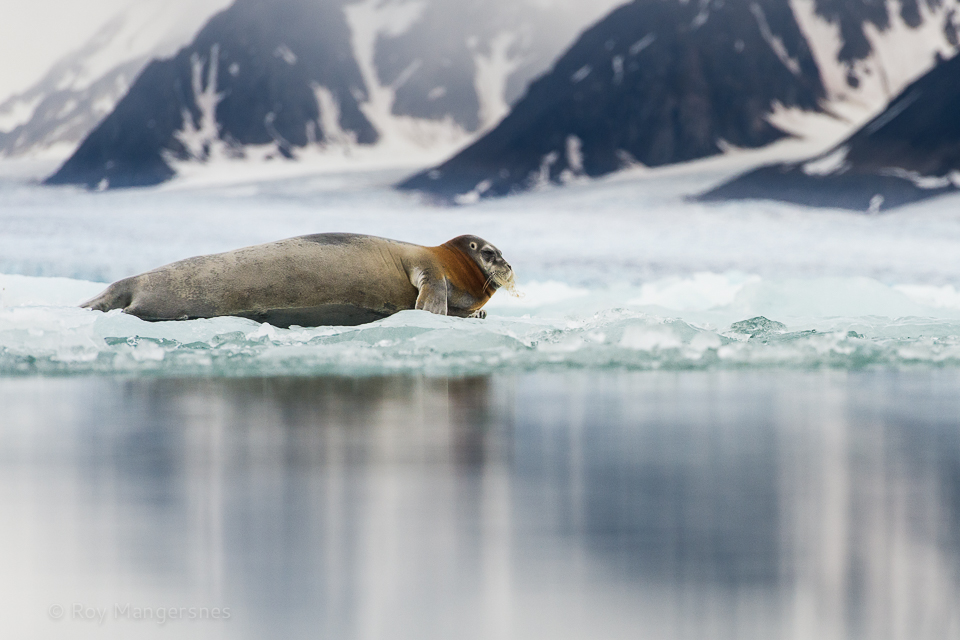 Day 9 – 23.07.2013 Most of the day was spent at sea, but in the evening we got ready for a long Zodiac cruise far into the Kongsfjorden. This is a great place for birds and seal, and we got plenty. Long-tailed and Arctic skuas, a lot of Guillemots and other species were photographed in the evening light. We also had several Bearded and a few Ringed seals on blue ice, just what we were looking for. 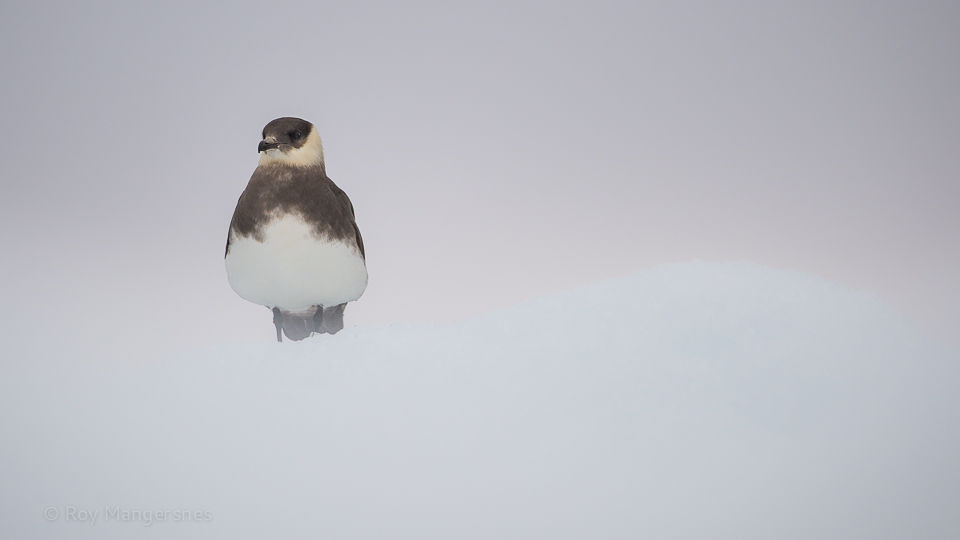 Day 10 – 23.07.2013 After just a few hours sleep we arrived at Forlandet for another try with the Walruses. The conditions were good and a big pile of animals gathered on the haulout. Unfortunately there wasn’t a lot of action but we had a nice stay on the beach.

In the evening we arrived at Alkehornet for another landing and a short hike. Entering the Zodiacs to land we were met by more then 50 Beluga Whales patrolling the shore, sometimes coming really close to the boats. After a short hike we split up and some guests went to work with the local Reindeers, while others went straight for the Arctic Foxes. After a short wait two beautiful cubs showed themselves nicely and we got some shots. As soon as the rest of the group arrived the cubs came back out again and gave us all a great little show. 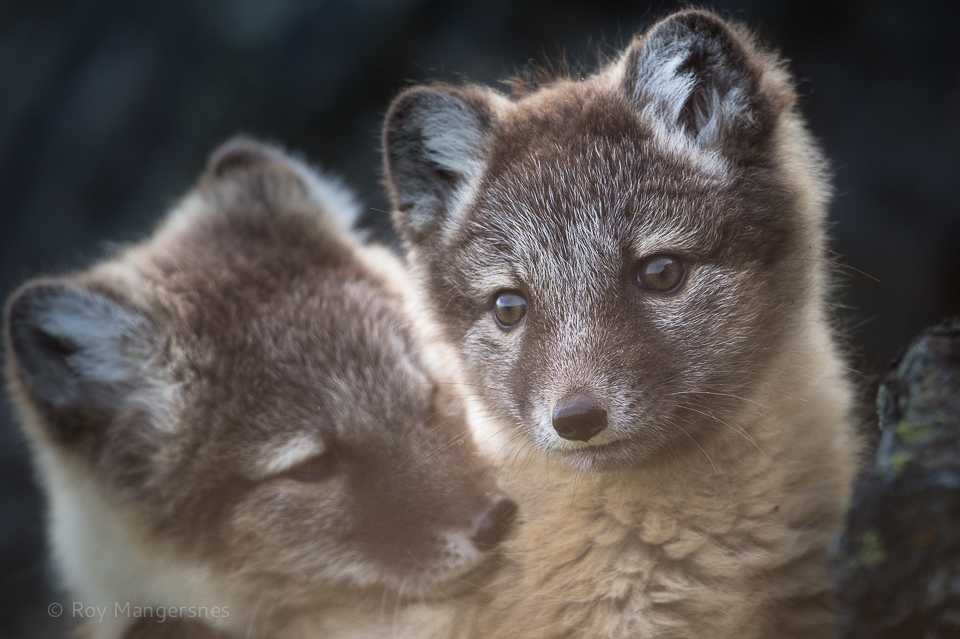 Returning to Origo we had a warm shower and a great meal on our way back to Longyearbyen. Late at night we anchored up in town on time. Everyone went to bed that night full of great memories, and some amazing images on file!