Our last Svalbard expedition of the season was a very special trip focusing on the magic light of late season. For this late September adventure we chartered M/V Quest leaving Longyearbyen with 35 guests. As expected the ice had retracted far north and conditions were very different from our previous expeditions this season. The trip was hosted by the complete WildPhoto Travel team with both Ole Jørgen and Roy, alongside Eirik, Rickard, Frede and of course Martin as our trusted expedition leader.

Day 0 – 14.09.2013 With a bigger group and more logistics we arrived two days in advance to Longyearbyen on this trip. Of course the best hours of light were devoted to photography. From the start the light was stunning and we managed to grab a few good frames before embarking MV Quest. 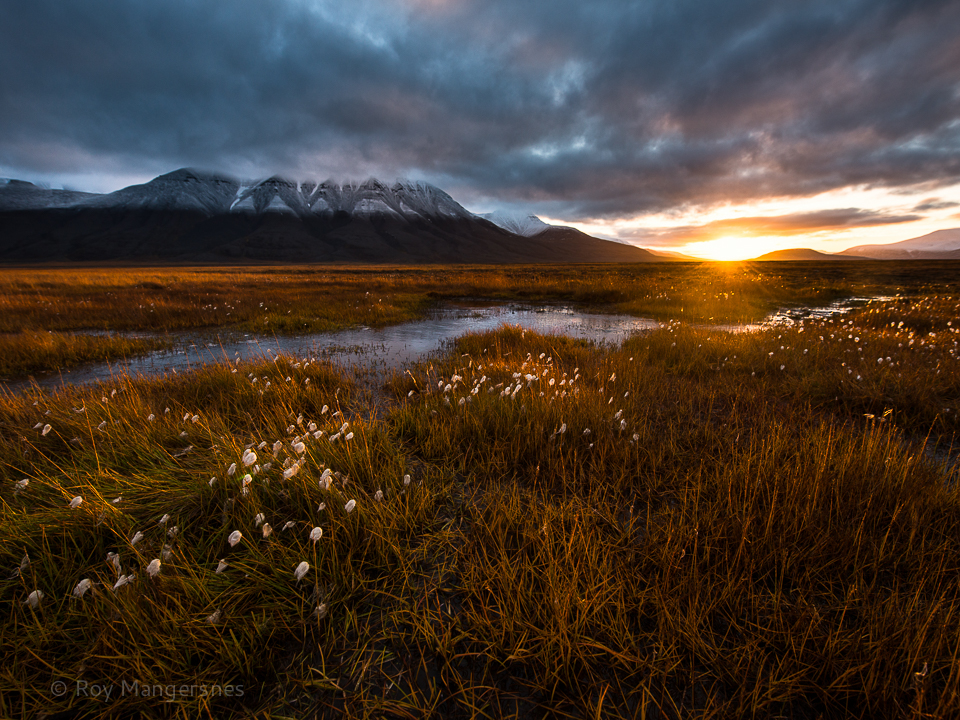 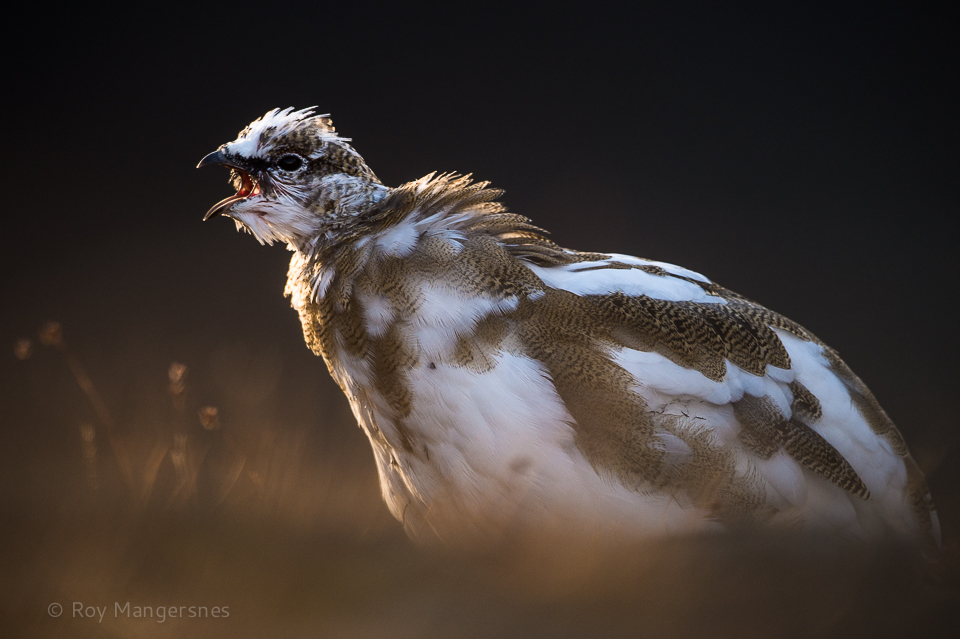 Day 1 – 15.09.2013 Leaving Longyearbyen in the evening, the westerly swell rocked us to sleep before we entered the sheltered waters east of Kong Karls Forland. Even several hours after sunset images were taken from the observation deck.

Day 2 – 16.09.2013 Before sunrise we entered the Zodiaks in Kongsfjorden for our first cruise. Slowly we moved closer to waiting Bearded Seals as the sky turned from pink to orange. The sunrise lasted for hours and everyone returned happy to a healthy breakfast onboard the ship. 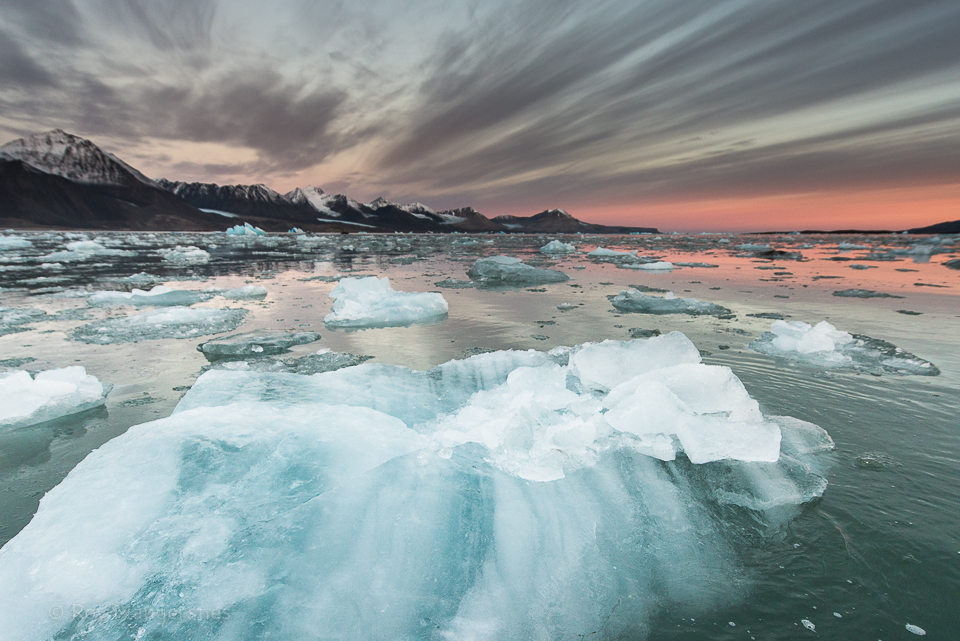 In stunning weather we sailed north along the west coast of Spitsbergen, before entering Smeerenburgfjorden in the evening light. Rumours said there was a Walrus carcass in the area. After searching the shore for a while we spotted our first Polar Bear of the trip. It did not give us great photo opportunities but still a great sighting. 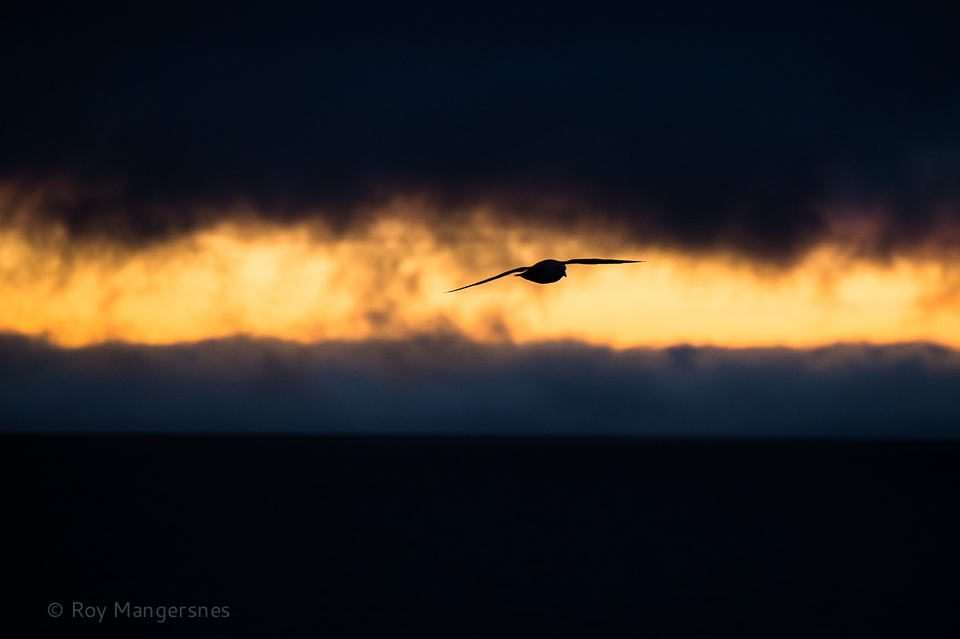 Day 3 – 17.09.2013 Sailing through the night and most of the day we started seeing ice on the horizon after lunch. The first Ivory Gulls were circling the ship, and to our amusement an adult Ross Gull came in for a short visit. Finally, at 82,3 degrees north, we entered the sea ice and the excitement were prominent. Not long after a Polar Bear were seen from far away. We slowly moved in and everyone got their shots. A good start! 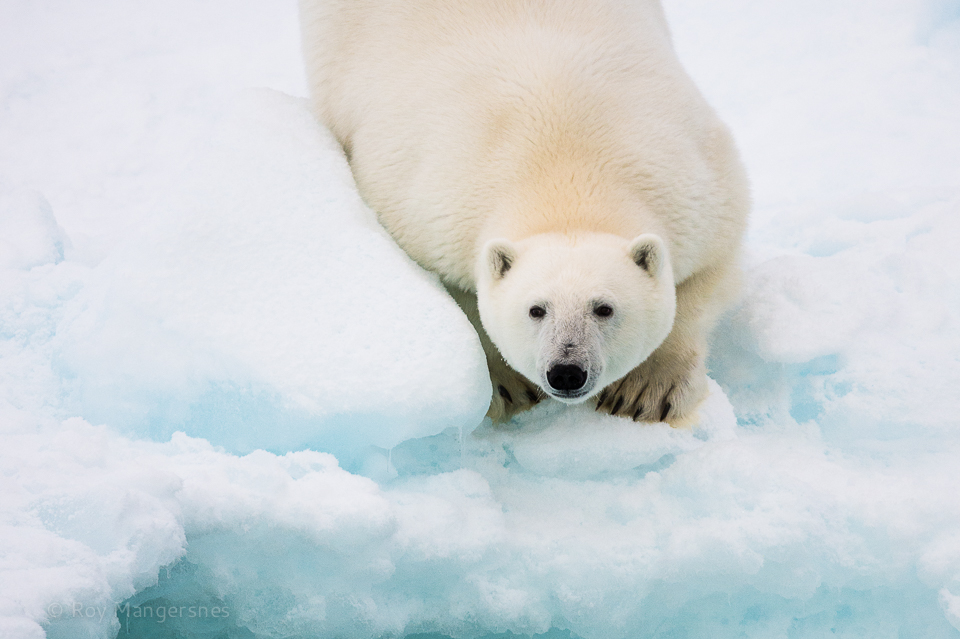 Day 4 – 18.09.2013 Early the next morning we found ourselves far north and east in the pack ice. The ship had settled in the ice for the night and all around us the ocean was freezing – the birth of new sea ice. Visibility wasn’t good due to fog, but we slowly moved through the ice in search of the arctic king. 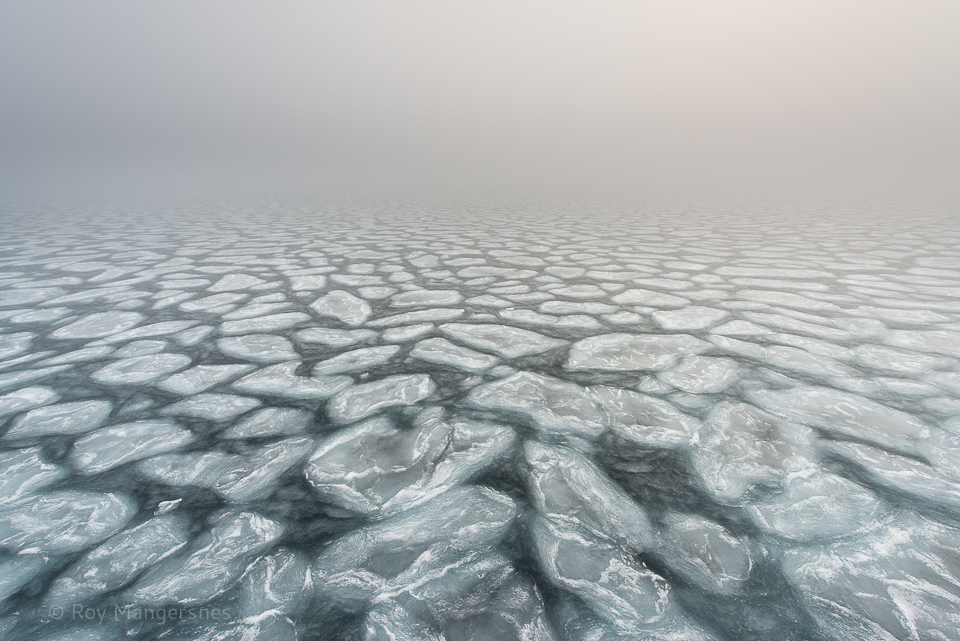 Eventually the sky cleared up and we started scanning the horizon. Far away a sleeping bear was seen and we moved quietly in for a closer look. It turned out to be a curious animal and he gave us some magic moments at 82,4 degrees north. Late in the night we were still photographing the red line on the horizon as the moon lit passing Fulmars. 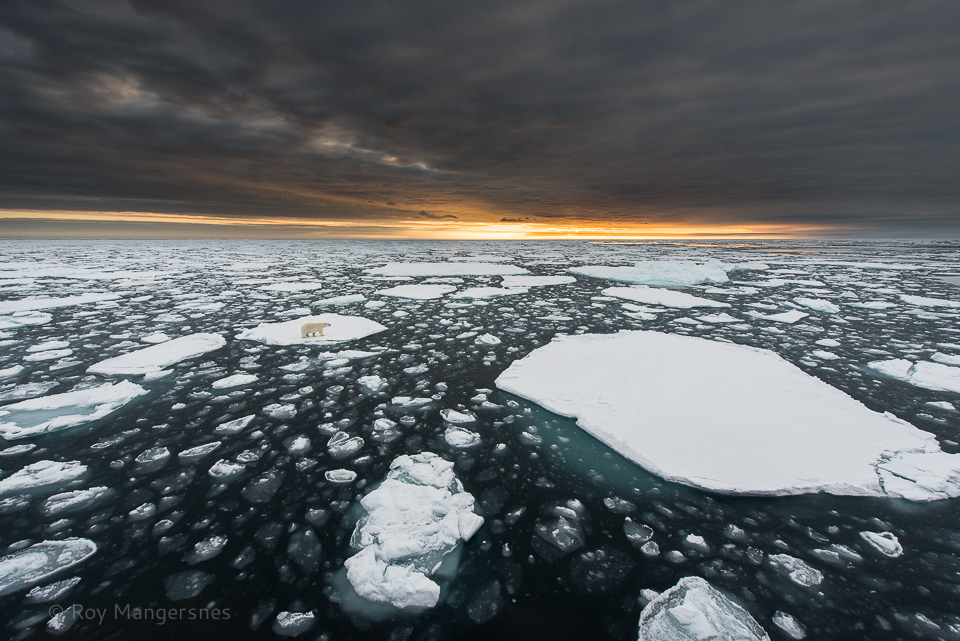 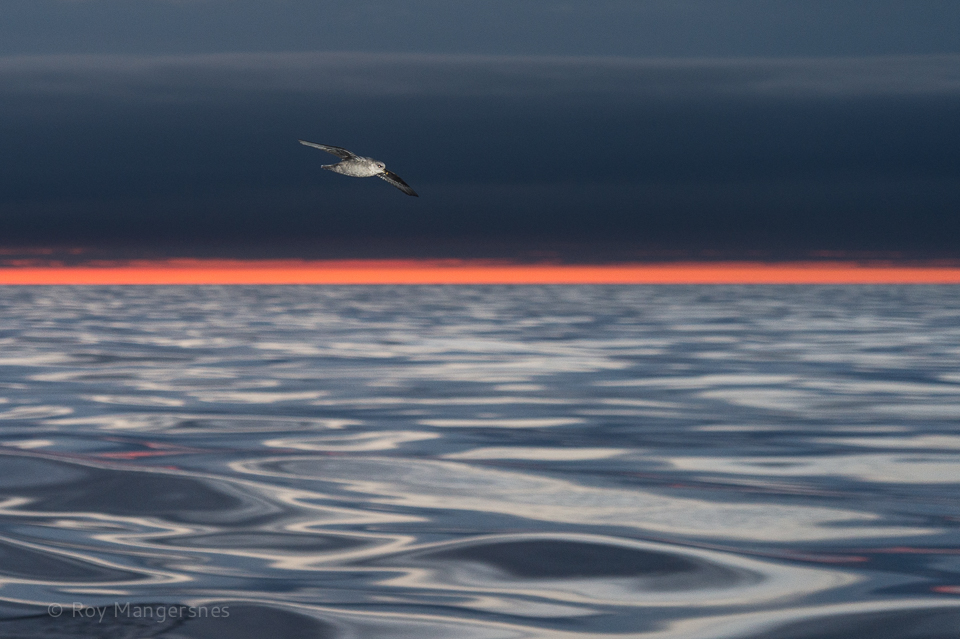 Day 5 – 19.09.2013 During the night we moved south and enjoyed breakfast as we entered Sjuøyene. The sun was already shining, but light was good as we lowered the Zodiaks. The first Walruses came to great us and on the beach we spotted no less then 5 waiting Polar Bears. Obviously there where no landing at this site, but some pretty nice images where made. 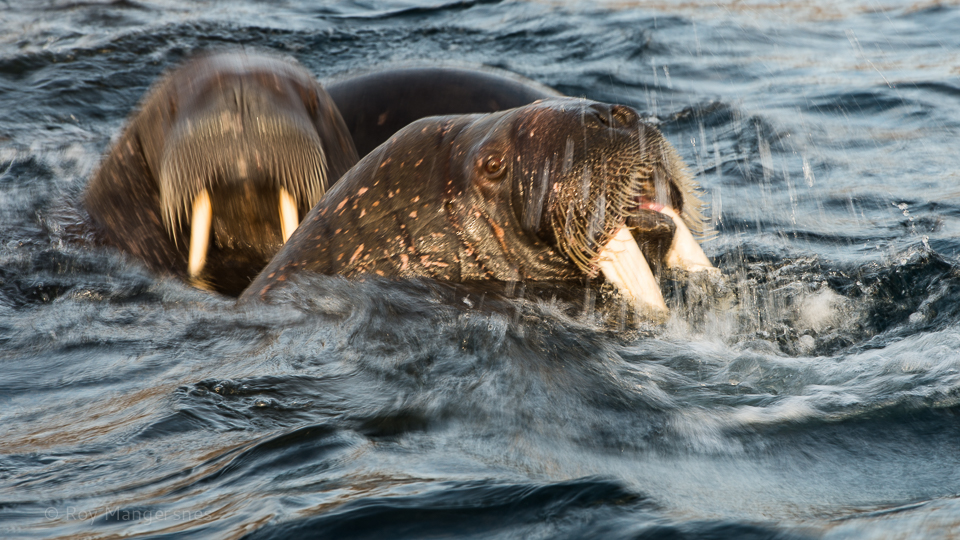 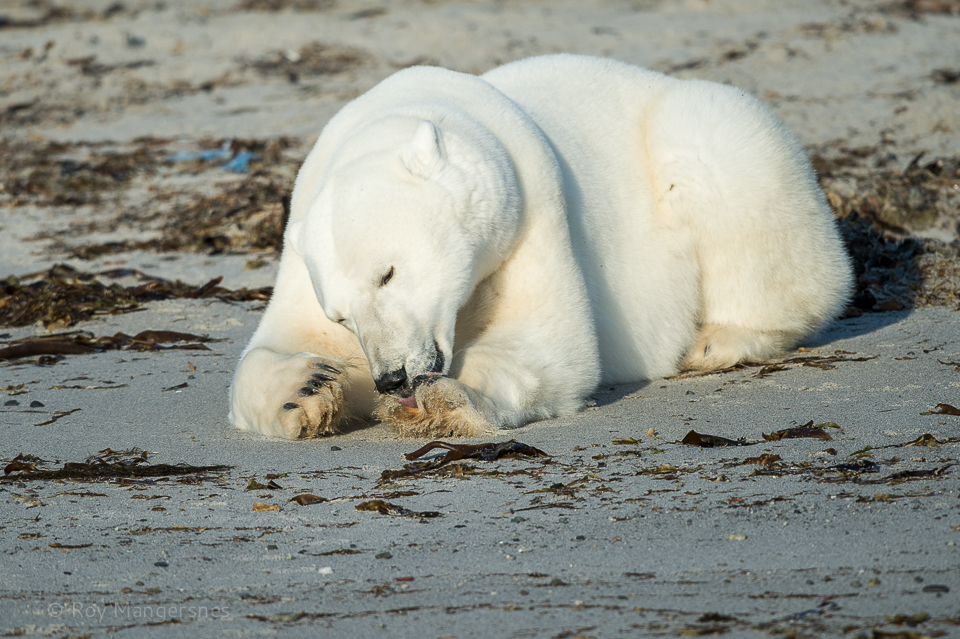 During the day we continued east and eventually found ourselves at Karl Xll Island, a magic place in the middle of the ocean. The first Polar Bears were spotted from the ship, moving through the mist on the sheltered side. From the Zodiaks we photographed Walruses with cubs and another 4 Polar Bears. A truly magic evening in the Arctic was completed with a sleeping bear photographed with a pink sky and full moon background. 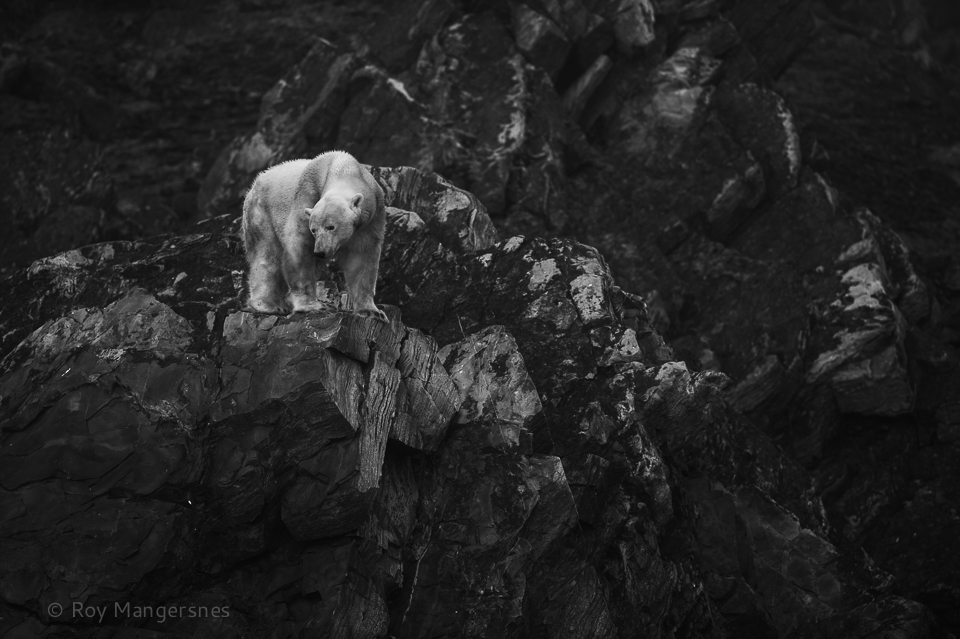 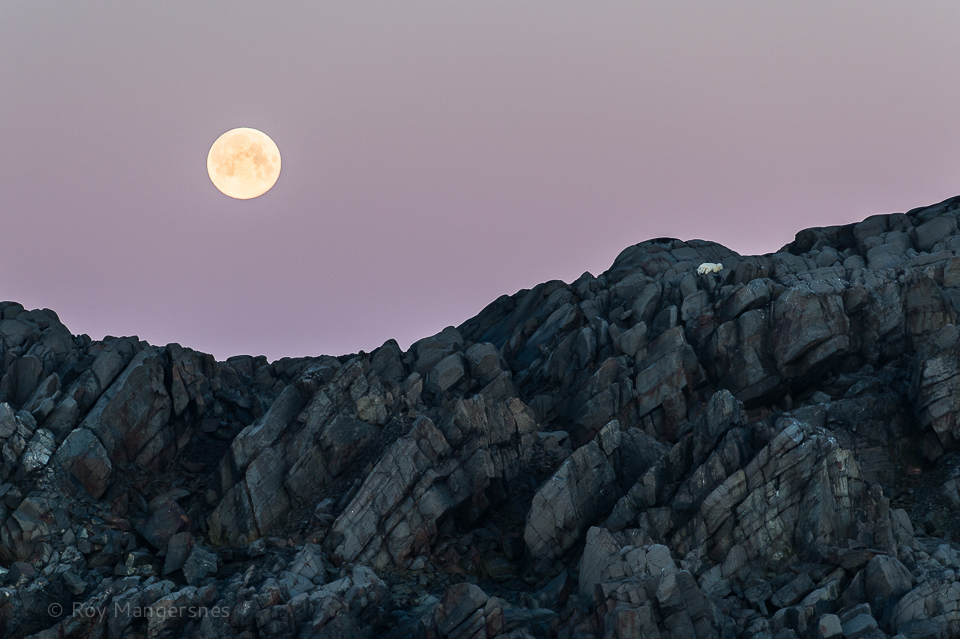 Day 6 – 20.09.2013 Due to good conditions we decided to continue east and visit the far east island of Kvitøya, a first for all our guests and also many of the staff. Sometime after breakfast we left with the Zodiaks and followed the shoreline. Around every corner Polar Bears and Walrus were spotted. Most were moving along the rocky shore feeding on seaweed and saving energy for the returning ice. Millions of Kittywakes rested on the ice sheet and all over the place Pomarine Skuas were practising their hunting skills. 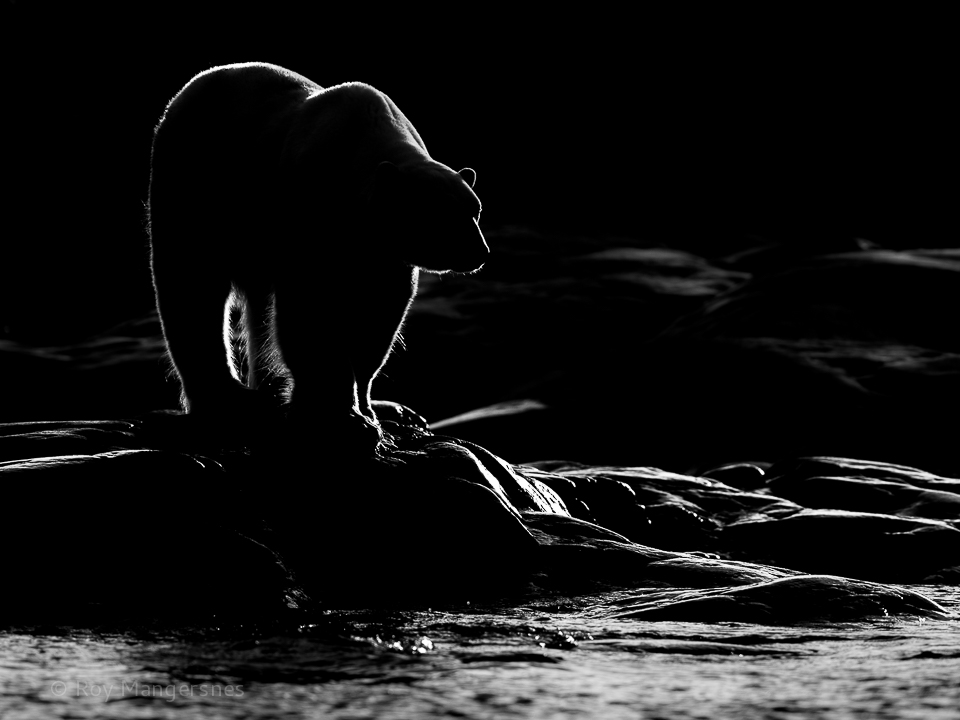 Day 7 – 21.09.2013 After a long cruise in the mist along Austfonna we found ourselves on the southern most tip at sunrise. Mist was still heavy, but we waited patiently for it to lift. After a couple of hours conditions changed and light came through as anticipated. This is why you go on a photographic expedition, and mot on a regular tourist cruise!

We continued into the Hinlopen strait and opted for a landing with Walrus. For the first time on this trip conditions were not favourable and we kept sailing north aiming for a sheltered landing. Luckily the conditions changed slightly and even though the wind was still strong we got a great landing with amazing landscapes and good photography. 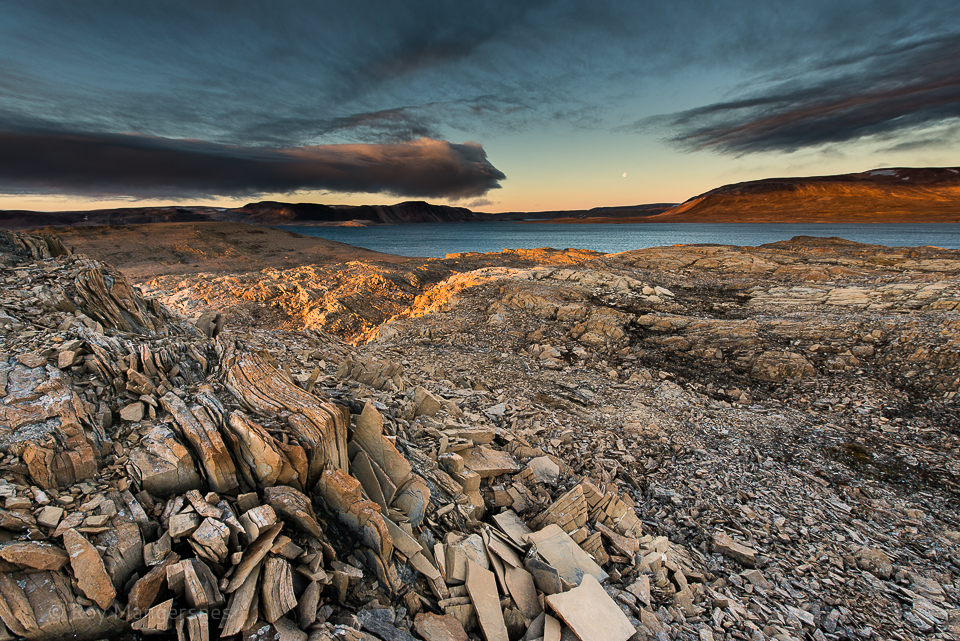 Day 8 – 22.09.2013 Travelling late in the season has many advantages, one being the possibility to land in bird sanctuaries like Moffen. Normally this is restricted area, but after September 15th we were able to land on this flat island. Our obvious target was to shoot Walrus at sunset so we went in for an early landing. Never mind the heavy swell, conditions were favourable and the light was great. Another successful session! 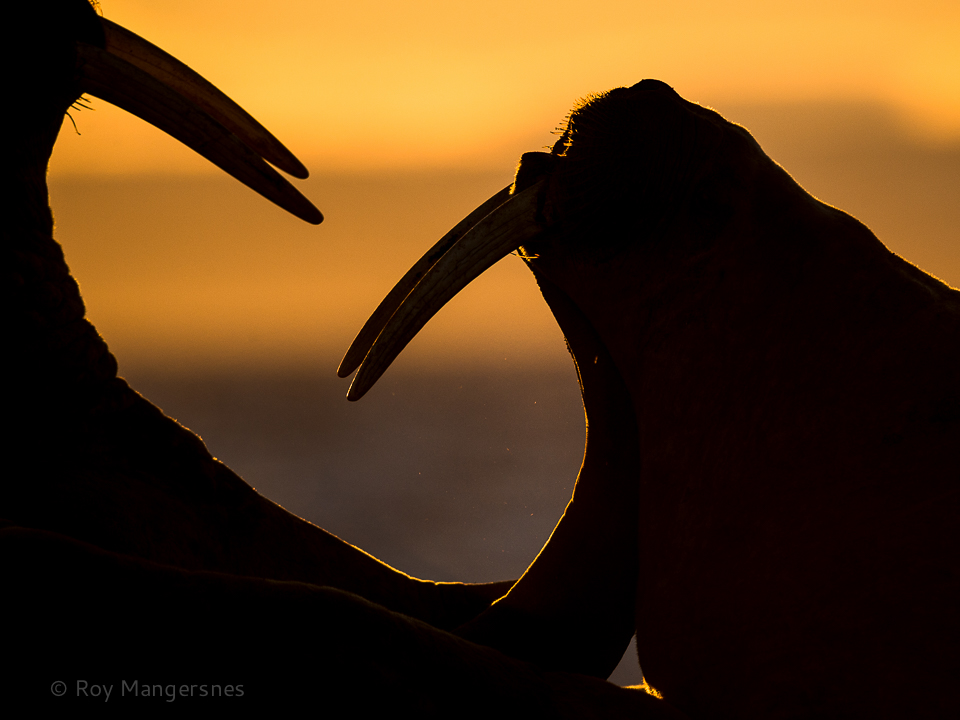 Moving south we constantly searched for whales, but without luck. As the evening light swept across the mountains we entered Fuglefjorden for a last Zodiak cruise. The light was amazing and the glacier preformed well. Constant bangs and calvings made this a thrilling experience. 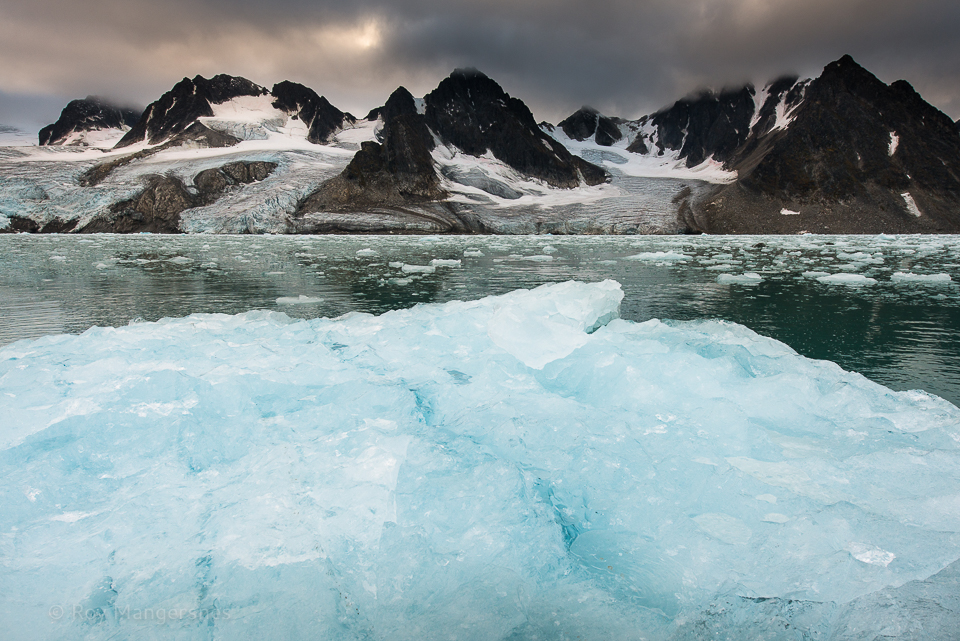 Day 9 – 23.09.2013 During the night we moved far out, west of Spitsbergen for a final attempt on the whales. Just as breakfast was being served it paid off and we had the privilege of observing at least 20 Fin whales and several Minkes feeding around the ship, constantly being harassed by the fast flying White-beaked Dolfins. 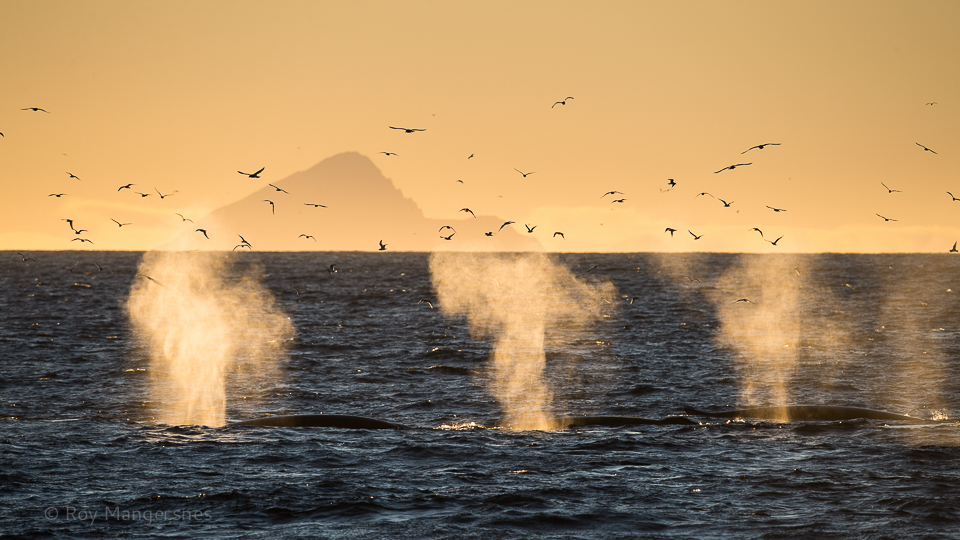 As so many times before this season we ended our expedition with a late landing at Alkefjellet. The local foxes were seen, but they were moving fast around the area, and only a few got decent shots. The Svalbard Reindeer on the other hand were very friendly and gave us some great encounters and images. The glasses were raised high at the Captains dinner later that evening. 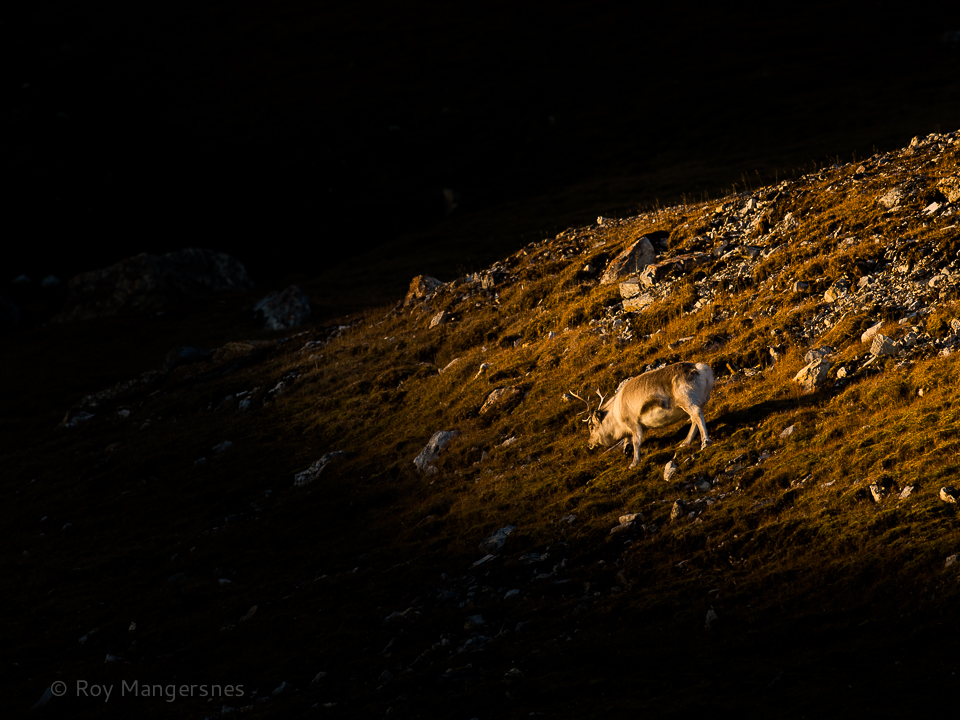