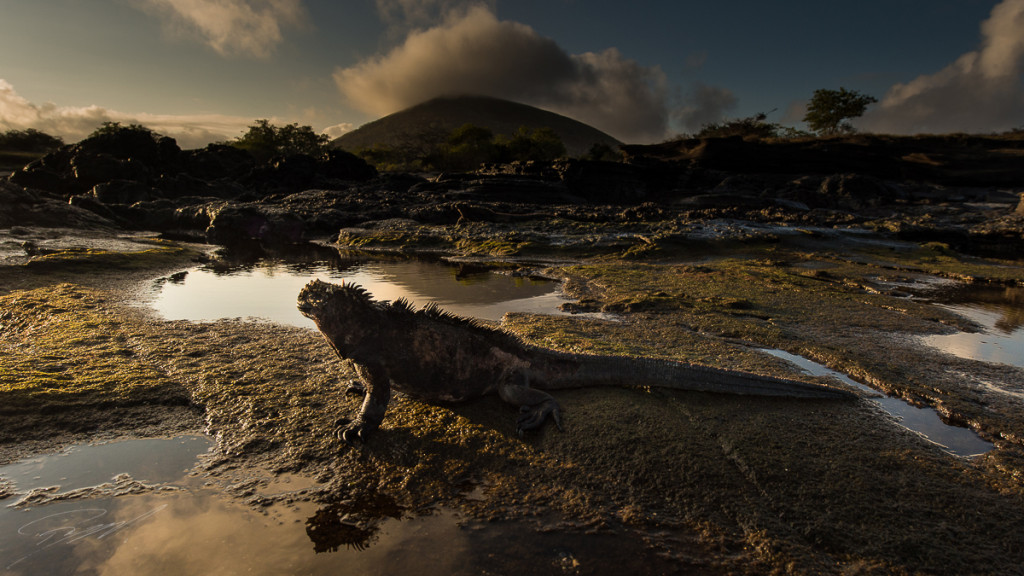 In late April Wildphoto Travel organized a photographic expedition to the unique Galapagos Islands and the Ecuadorian cloud forest. Roy Mangersnes was the tour leader on this adventure, but due to late cancellations Ole Jørgen Liodden also joined the trip as we left for Galapagos. This was our second Galapagos expedition and our best so far.

Day 1 – 22.04.2014 After a long journey we landed in the Ecuadorian capitol Quito, where our local agent picked us up. The last leg was done in the late evening and we arrived at our cloud forest lodge just after sunset for our first dinner. As a treat the first night we got to see the newly discovered mammal, the Olinguito, feeding on bananas at the lodge. 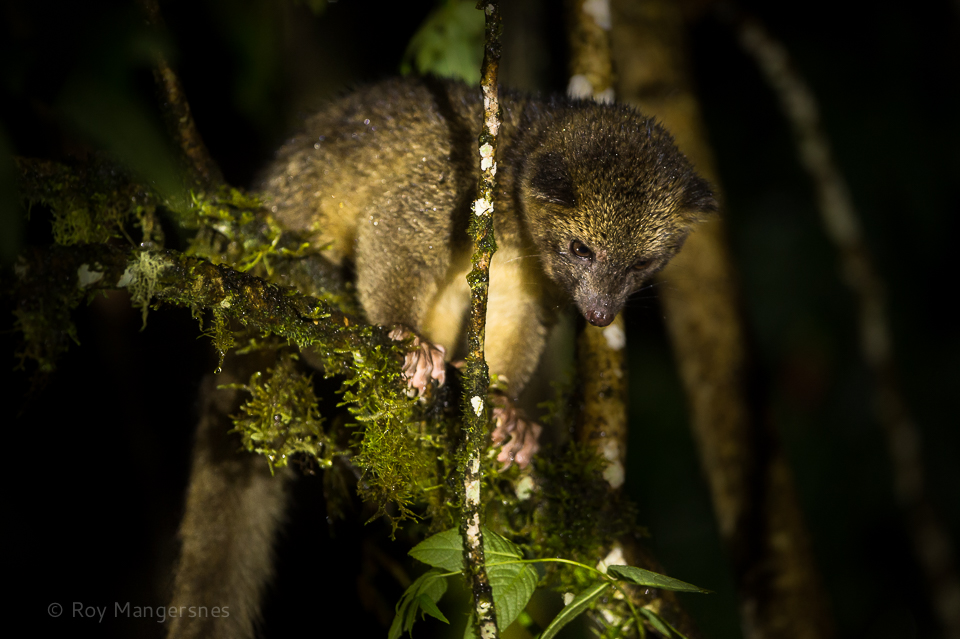 Day 2 – 23.04.2014 Early the next morning we got up for a early breakfast. The plan was to take a short walk to get to know the area, but as the light was nice we spent the first session photographing the local Hummingbirds and Tanagers.

After lunch we went for a short hike and were lucky to photograph the Plate-billed Mountain-Toucan. Upon our return we visited a different place for Hummingbirds and got to photograph even more species lower down in the valley. 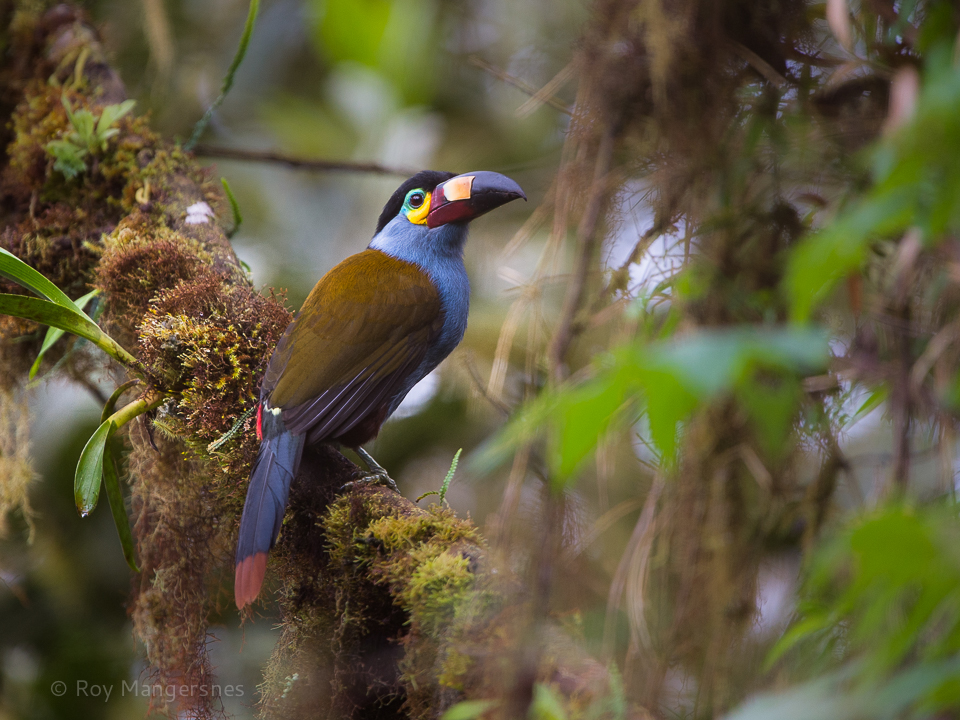 Day 3 – 24.04.2014 This morning everyone was up at 04:00 to visit a local Cock of the Rock lek. It sure was fascinating to see and hear these elaborate birds displaying in the canopy around us. 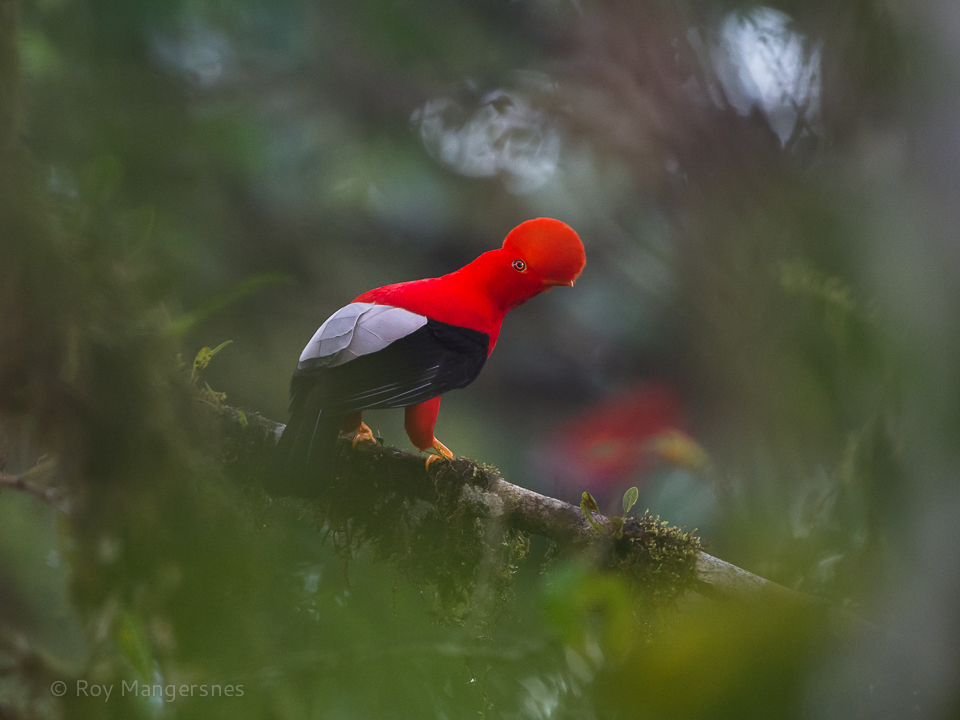 After a while we moved on to see if we could find more of the local wildlife and where treated with three species of Antpitta, including the Giant, and also Manikins and a Cloud-forest Pygme-owl, which was a bonus for all of us. After some more Hummingbirds we left for Quito where we spent the night. 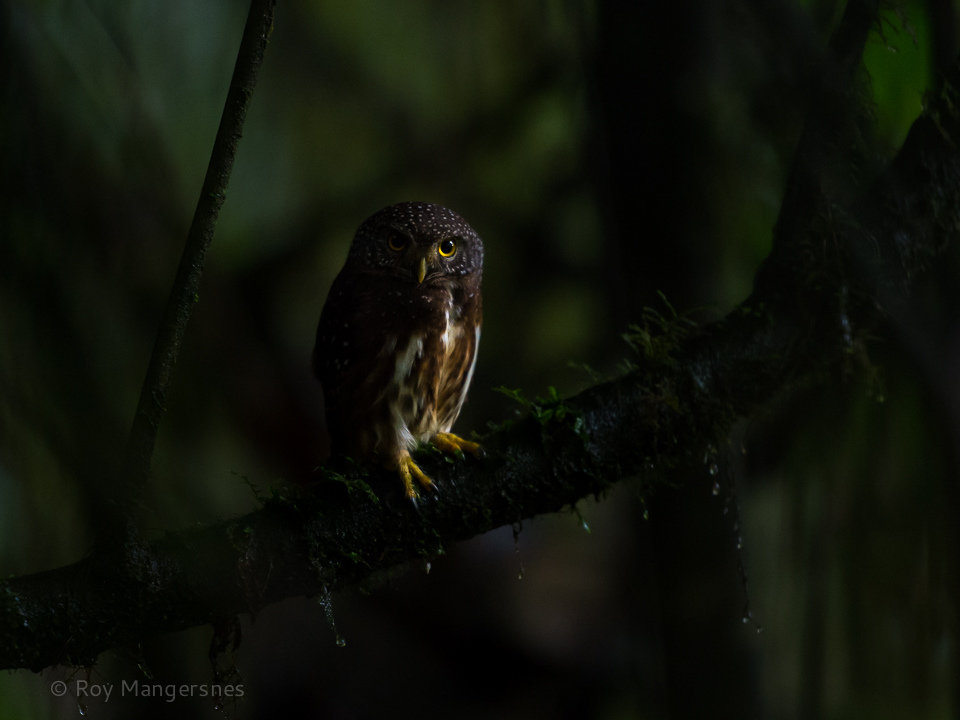 Day 4 – 25.04.2014 Early in the morning we flew to Baltra, Galapagos, only picking up Ole Jørgen in Guayaquil. From the airport we were transported to our ship, the Tip Top IV, and introduced to the staff on board. As we arrived early we started with a morning snorkel to get to know the equipment. The first shark of the trip was seen here, as well as Galapagos Fur Seals.

The evening was spent on North Seymour with several Land Iguana encounters and also good activity with the Frigatebirds and Blue-footed Boobies. The sunset was enjoyed from land and we were able to enjoy the late evening light as we wanted. A good start! 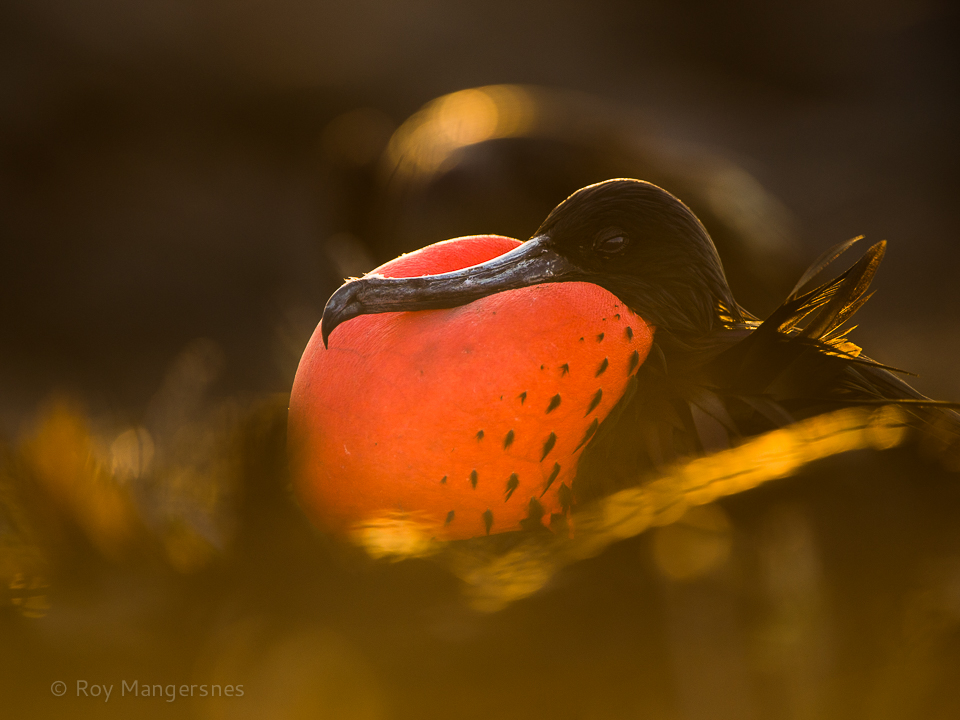 Day 5 – 26.04.2014 During the night we navigated to Genovesa Island and landed before sunrise on Tower. The air was filled with nest-building Red-footed Boobies and courting Frigatebirds. Also Marine Iguanas and Sea Lions were photographed in the first light. 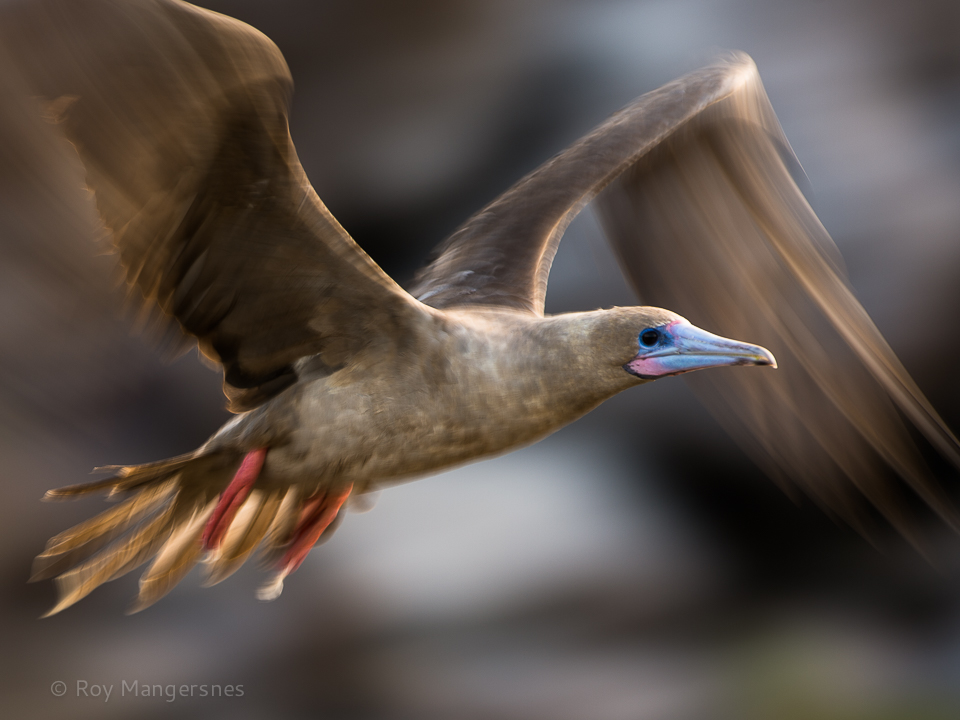 Mid day we went for a snorkel on the outer reefs and had more shark activity including our first Hammerhead. Also Sea Turtles, Rays and a lot of colourful fish were seen.

In the evening we landed on Prince Phillip´s Steps, to visit the Storm Petrel colony here. On this landing we were met by Nazca Boobies and Red-billed Tropicbirds on the shore. The main target were the Short-Eared Owl hunting Storm Petrels and we were lucky to see three individuals, including one giving us good close-up opportunities. 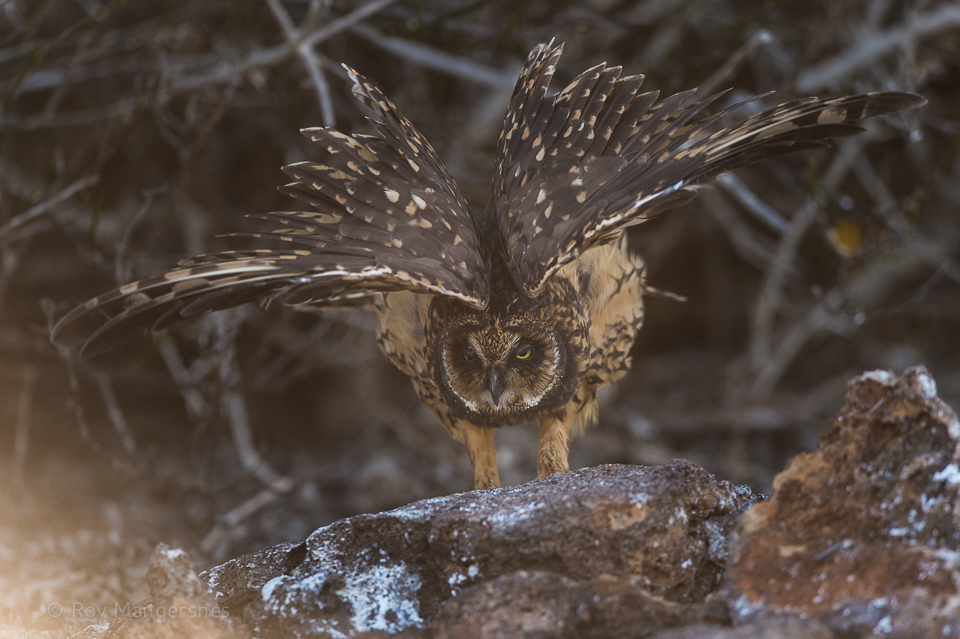 Day 6 – 27.04.2014 Next morning we had moved to Santiago Island and landed before sunrise at James Bay. Focused on the best photographic opportunity at this landing we moved quickly to the tidal pools nearby. Here we enjoyed a couple of hours of amazing Marine Iguana photography – backlight of course… 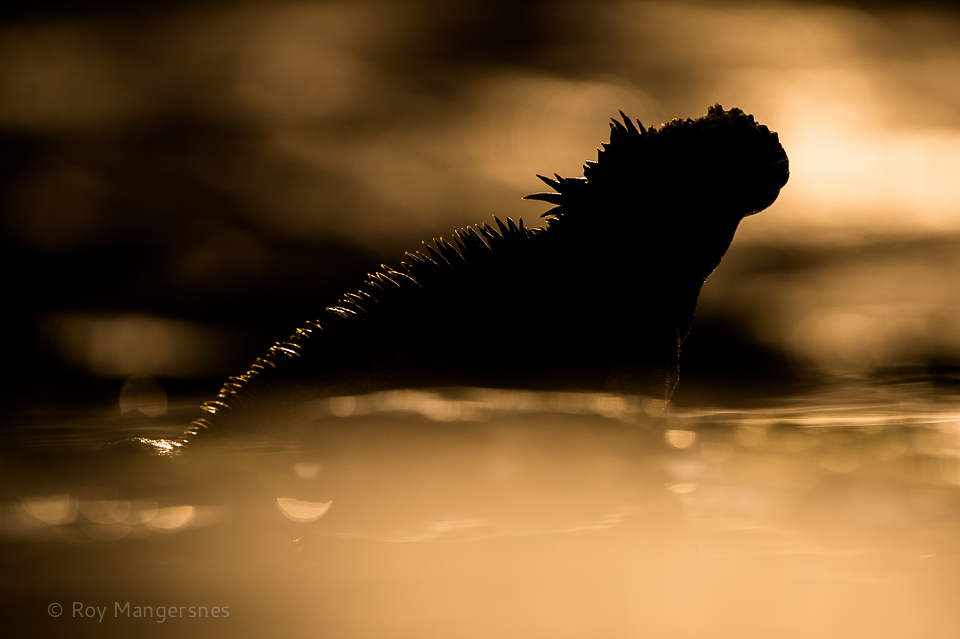 After a rapid turnaround on the boat we went for a snorkel and saw two sleeping White-tip Reefs Sharks, a large Galapagos Shark and several Pacific Green Sea Turtles.

In the evening we went for a short zodiac cruise before landing on Espumilla Beach. This is usually a good place for Galapagos Hawks and minutes after landing the first hawk landed in the middle of the group. After a while we found several more, and could enjoy a nice sunset from the beach. 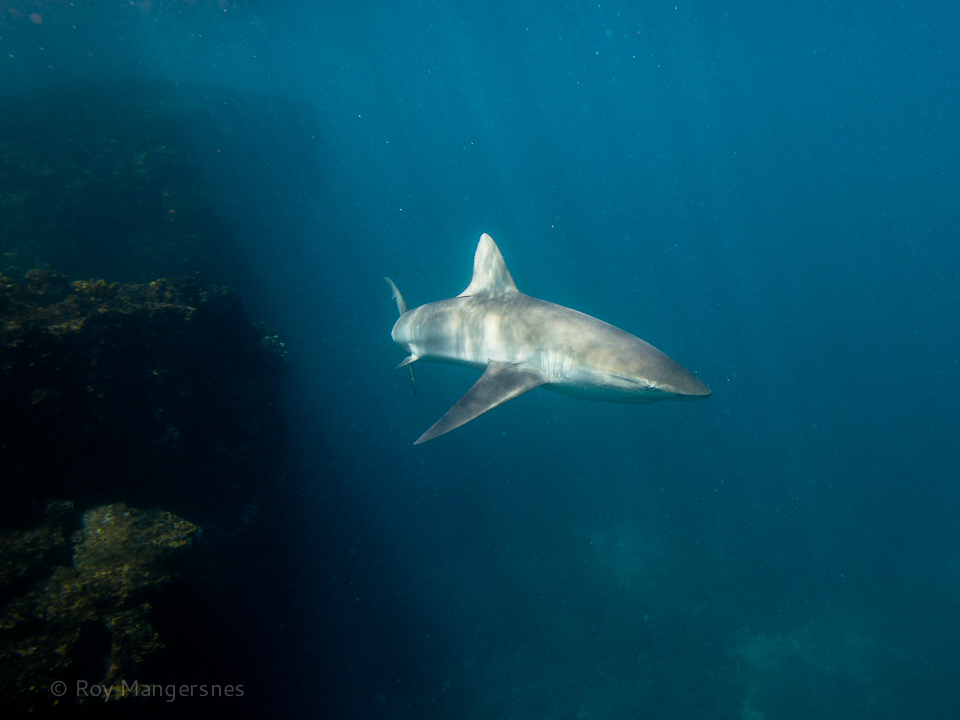 Day 7 – 28.04.2014 During the next morning we crossed over the equator twice, moving north of Isabela Island. The sunset above the volcanic island was spectacular, and a couple of Bottlenose Dolphins were seen from the deck.

Arriving at Punta Vicente Roca we went out for a short zodiac cruise before our morning snorkel. Elliot Storm Petrels were seen as well as our first Galapagos Penguins. All along we had Sea Turtles surfacing around the boats.

During the snorkel we saw even more Sea Turtles, and also our first Marine Iguana feeding under water. Also the local Penguin came to check us out. During lunch we crossed over the canal and were treated with a Sperm Whale as well as about two hundred Common Dolphins. 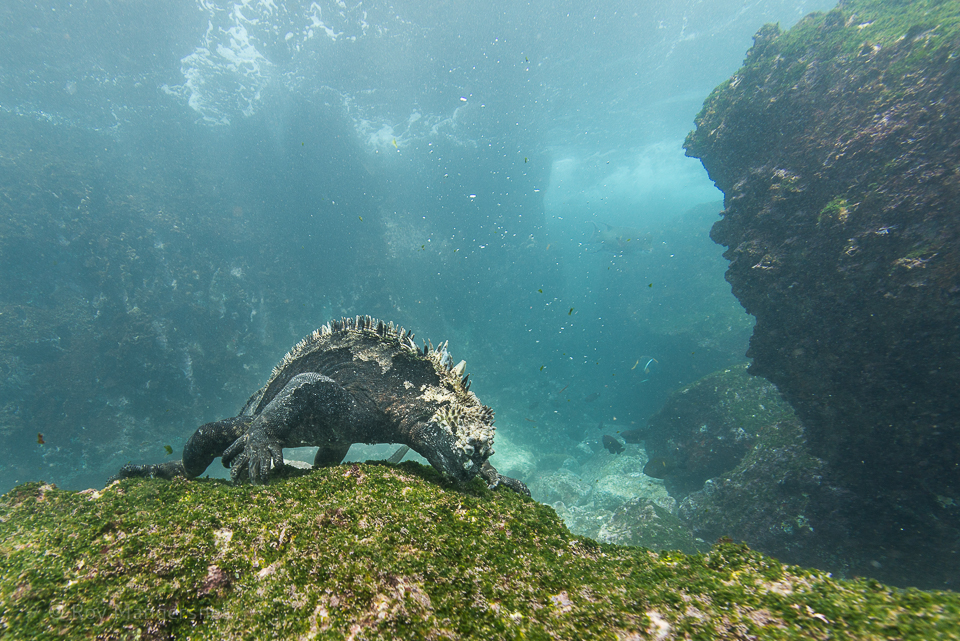 In the evening we went for our second snorkel of the day, hoping to see more feeding Iguanas. Unfortunately the tide and weather was not on our side and the iguanas were resting. However the local Sea Lions and Sea Turtles gave us a great show and good photo opportunities. 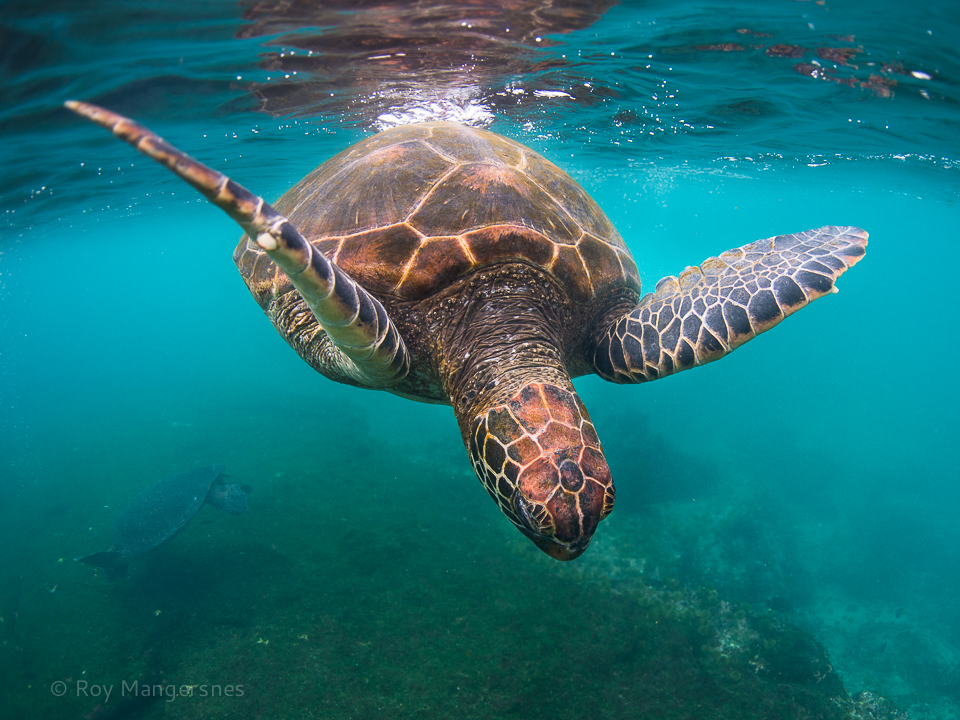 The evening was a very wet landing on Punta Esponiza with piles a Marine Iguanas as the main attraction. The heavy rain gave us some challenges, but late in the evening the sky cleared up and we got a beautiful sunset over the lava rocks. 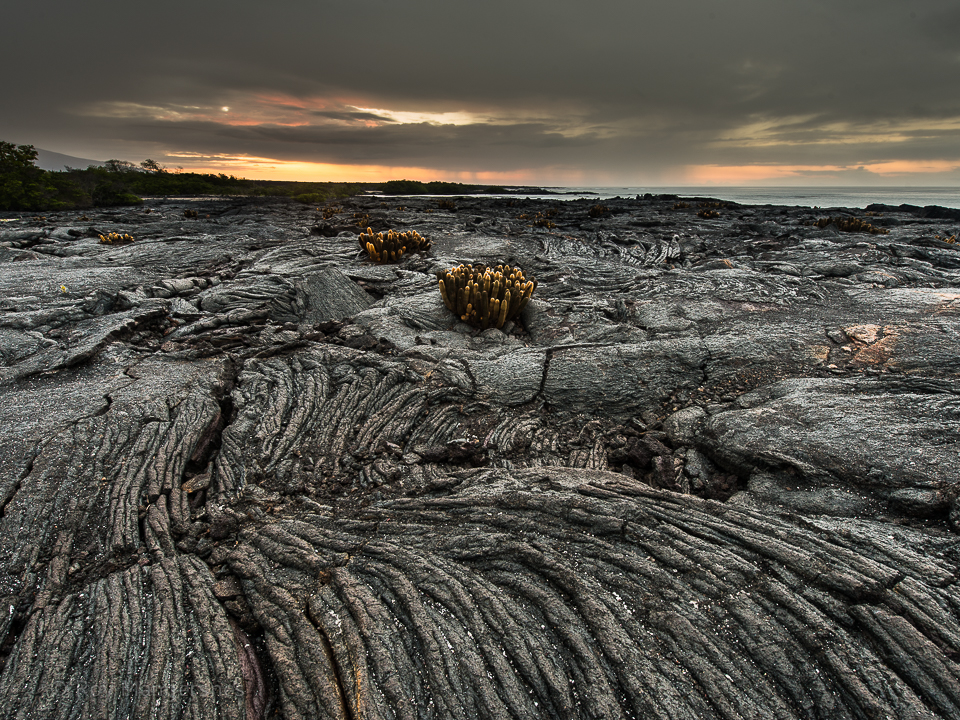 Day 8 – 29.04.2014 As a special treat this morning we visited Tagus Cove, focusing on the rare Galapagos Penguins. In the early morning light we went on a zodiac cruise and worked with the colourful reflections from the cliffs. Both Penguins and the endemic Flightless Cormorant were photographed in great light. 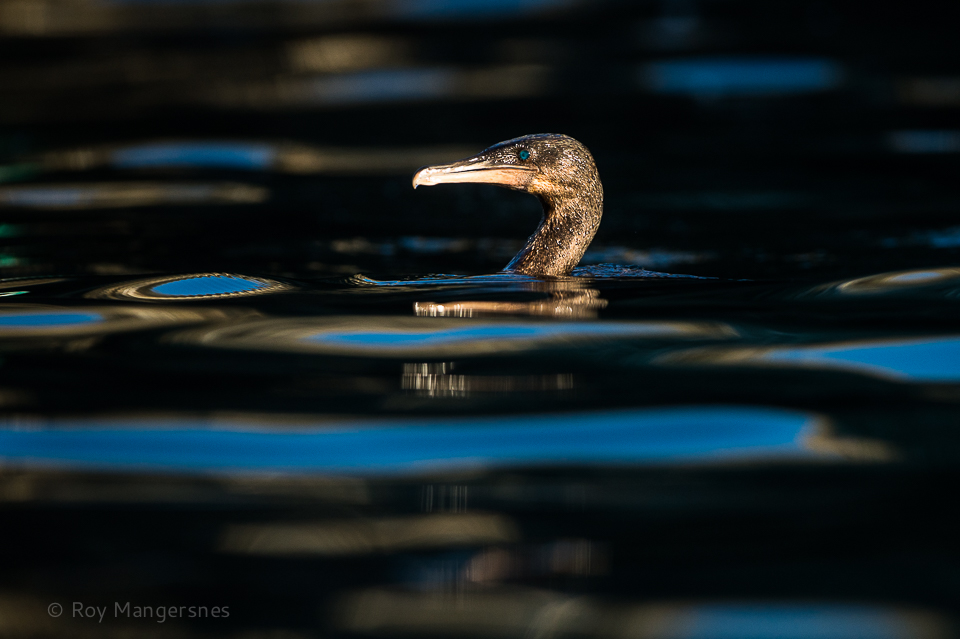 Shortly after the cruise we went snorkelling in the same area, also focusing on Penguins. This proved hard and we really had to work to get them close and in position. Eventually we succeeded and we got the images we were hoping for. Also feeding Cormorant was photographed under water. 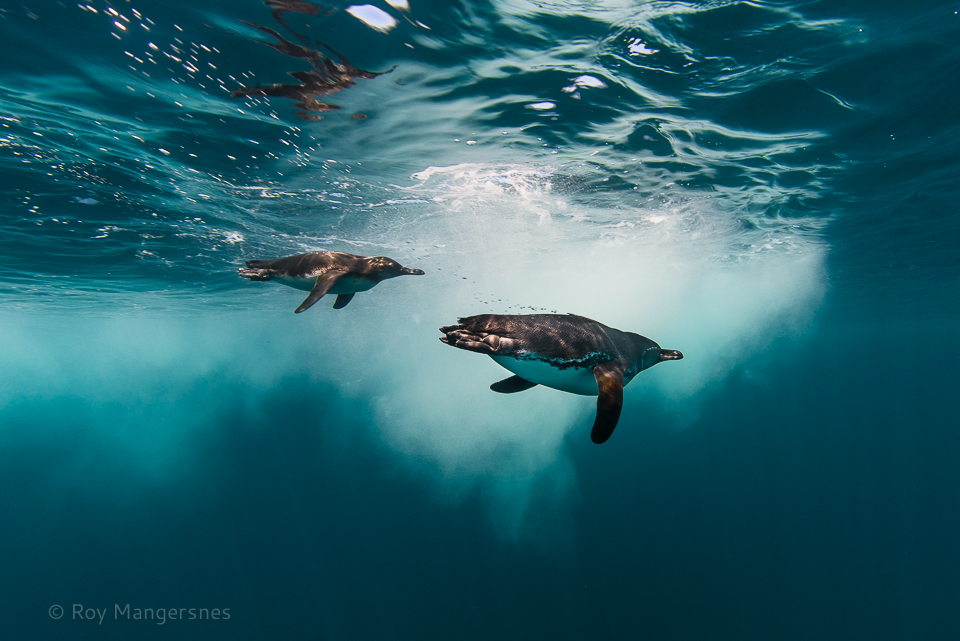 The late evening was spent in Elisabeth Bay, were we entered the Mangroves in Zodiacs. In addition to a Brown Booby (apparently the second observation in the archipelago) the highlight this evening was a stunning sunset and several birds on a reef. Penguins, Boobies and Cormorants were photographed in perfect light. 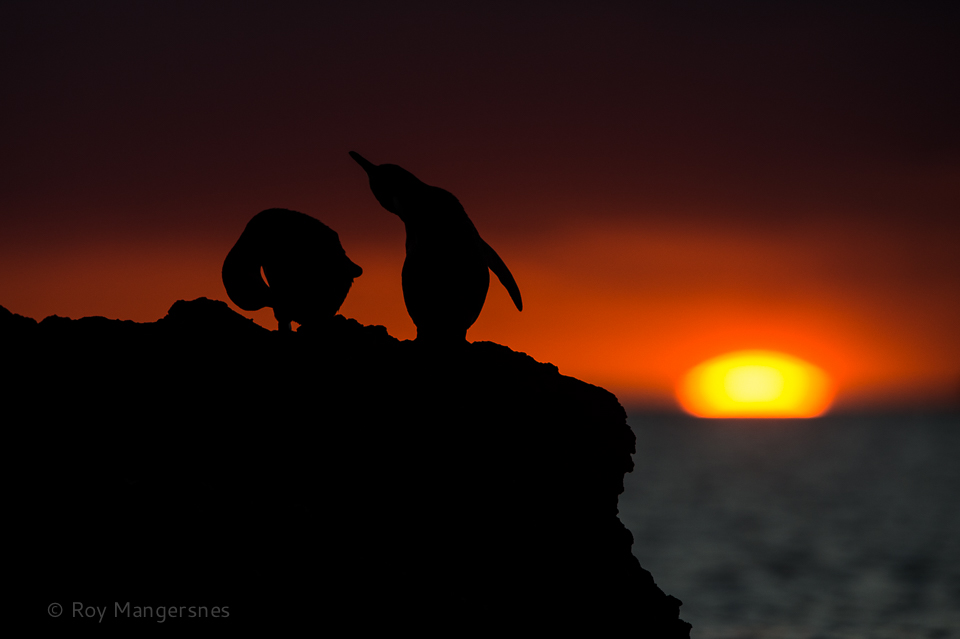 Day 9 – 30.04.2014 At sunrise we landed on Tintoreras to see if the locals sharks were resting here. Unfortunately the tide was a little high and no sharks were seen. However the beautiful morning was spent photographing Marine Iguanas and Lava Lizards, and it turned out to be a very good session.

Shortly after we headed for the highlands of Isabela, near Sierra Negra Volcano. The weather was not god for hiking so everyone stayed in the lower forest to look for the striking Vermillion Flycatcher. As the rain stopped the bird became active and we had several pairs showing themselves nicely in the moss-covered Walnut trees. Also Woodpecker Finch and other passerines were seen.

The evening activity was focused around the village and some of us found Iguanas on the beach while others decided their time to work at the local wetlands. One of the highlights this evening was the elaborate Flamingos. 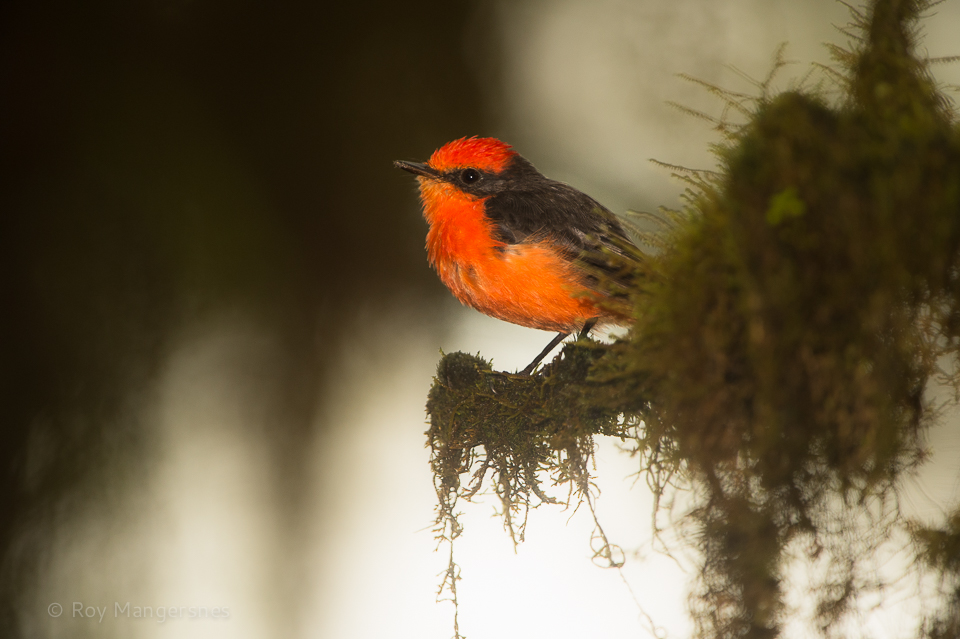 Day 10 – 01.05.2014 In the morning we landed on Floreana Island for a quick walk to Punta Cormorant. Here a Yellow-Crowned Night Heron hunting for crabs met us, and in the surf some stingrays were feeding actively, and in the nearby lagoon we had close encounters with Flamingos.

Around mid day we jumped in the water again for a snorkel around Champion Islet. This was a great snorkel with lots of playful Sea Lions in the shallows and good visibility. 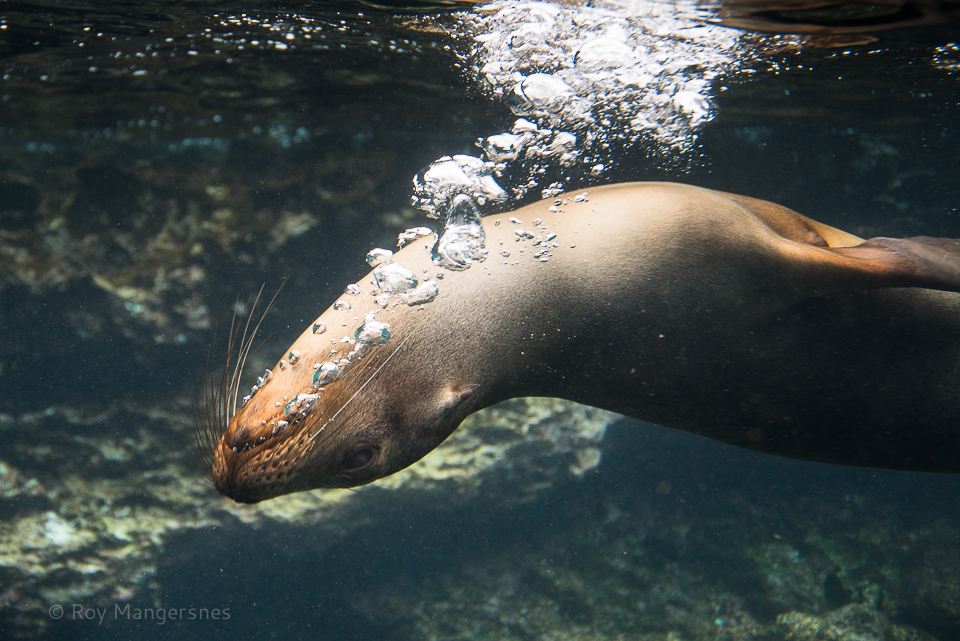 In the evening we had a quick stop at Post Office Bay before going on a zodiac cruise in the small archipelago. Here we had some good Pelican action and again ended the session with a beautiful sunset. This time we focused on the stretching Sea Lions and Booby against beautiful background colors. 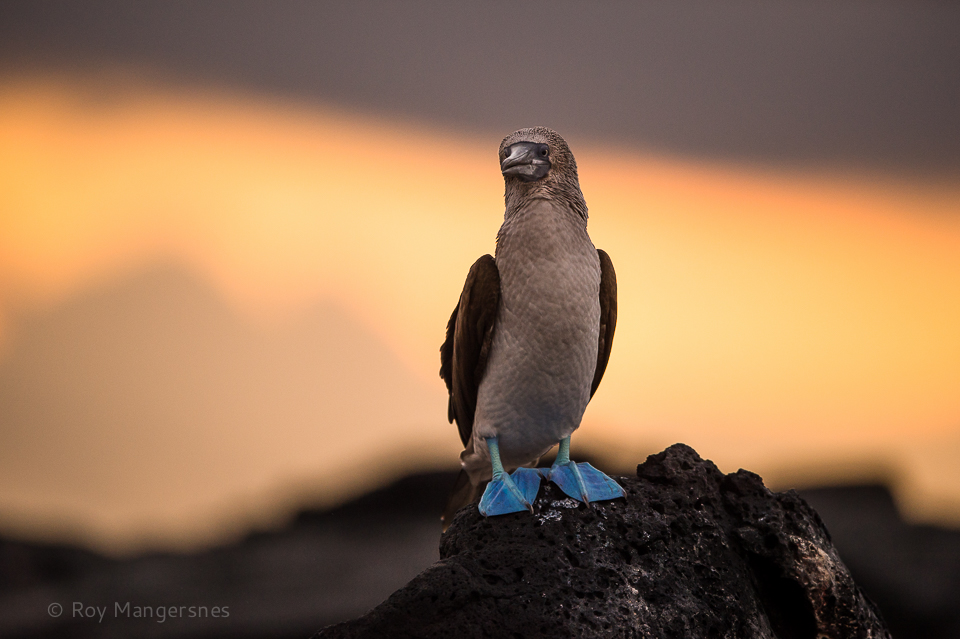 Day 11 – 02.05.2014 Early in the morning we landed in Puerto Ayora and left with a bus into the highlands. Here we saw our first Giant Tortoises, a true symbol of the islands. In addition to loads of tortoises dwelling on pools and feeding in the undergrowth we photographed Woodpecker Finch, Galapagos Flycatcher and other passerines.

Before lunch we went for a hike in the Scalesia forest and photographed more finches and warblers. After this we had a well-deserved lunch before a quick visit at Tui De Roy’s to see her new book on Penguins and other nice publications. In the evening we explores the town with its fish marked and shops. 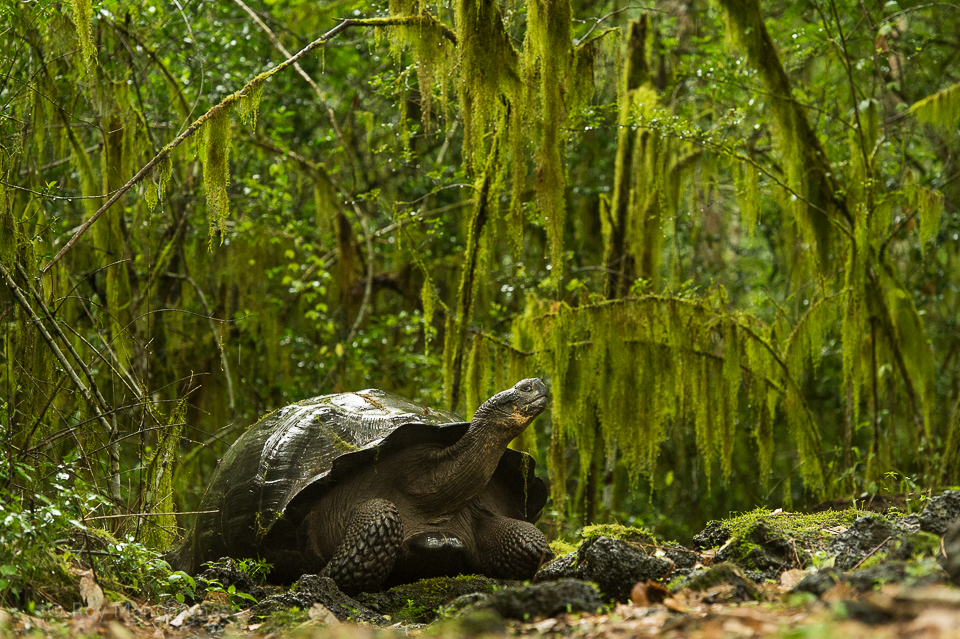 Day 12 – 03.05.2014 At dawn we landed on Espanola Island and rushed across to the breeding area for Waved Albatross. We reached the destination just as the sun broke through and we spent a couple of magic hours with these special birds. Also boobies and reptiles were photographed. We even had a quick look at a Galapagos Snake in the rocks. A total of four hours were spent on the island. 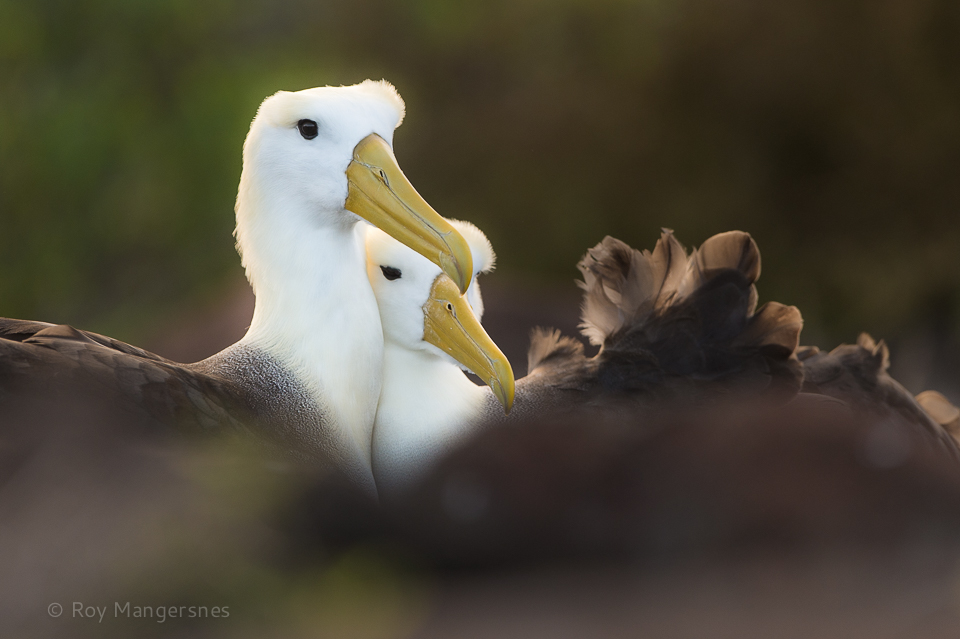 After a good rest we went for a “Rambo-snorkel” on a nearby reef. The surf and the currents made this a thrilling experience, but a shoal of Hammerhead Sharks and also several Eagle Rays made it worthwhile.

The late evening was spent on the nearby beach “bathing” with Sea Lions. Especially the younger animals were very playful and we could work with underwater equipment from the beach for a different approach. 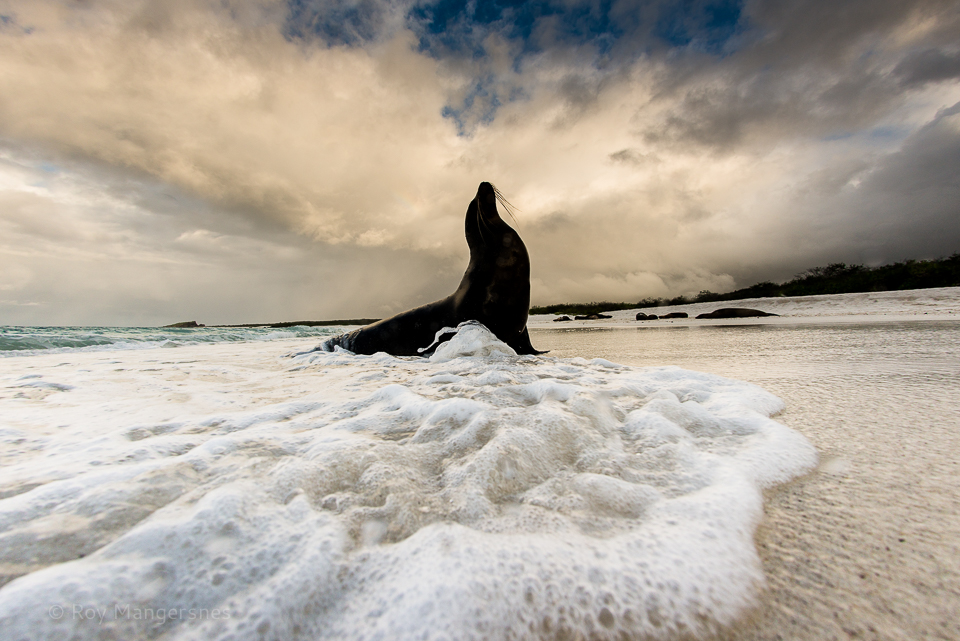 Day 13 – 04.05.2014 This morning we went for a hike at Punta Pitt on the island of San Cristobal, in stunning landscapes. This is also a nesting area for Red-footed Boobies and some of us were panning the birds against a colourful backdrop.

After the hike we spent some time shooting Sea Lions on the beach and continued with a Storm-petrel challenge from the zodiacs. 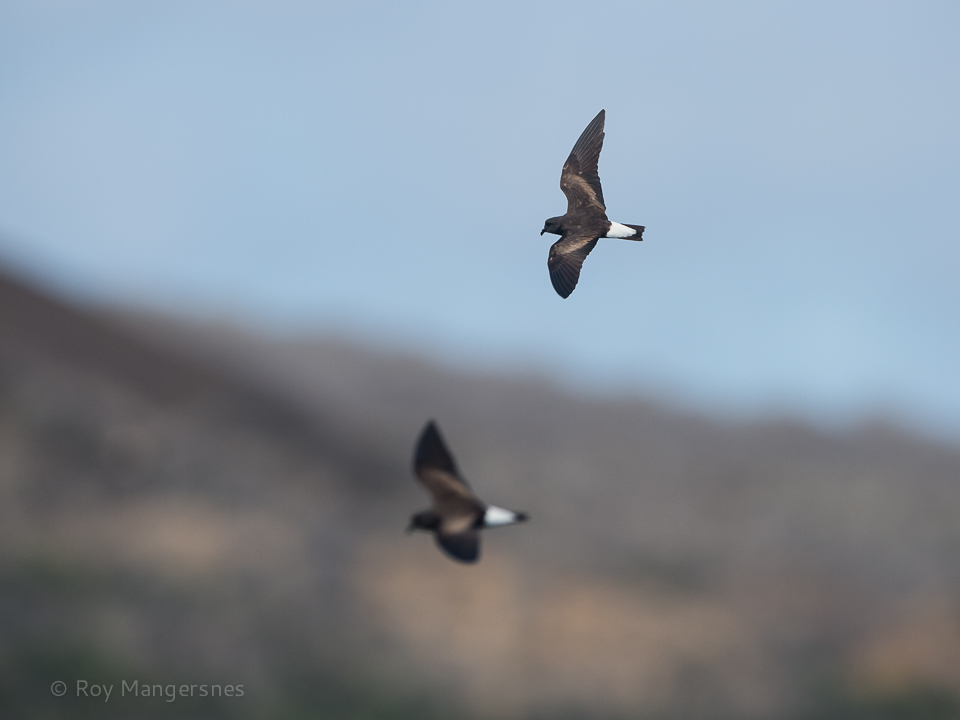 In the evening we moved to the famous Kicker Rock where we went for a long snorkel. This is a good shark spot, but the warm water was not in our favour and we only saw one. The sea turtles on the other hand gave us some great encounters.

The late evening was spent on a nearby beach with Fiddler and Sally Lightfoot Crabs, Pelicans, Blue-footed Boobies, Lava Gull and Sea Lions. The day ended with a nice sunset view over Kicker Rock. 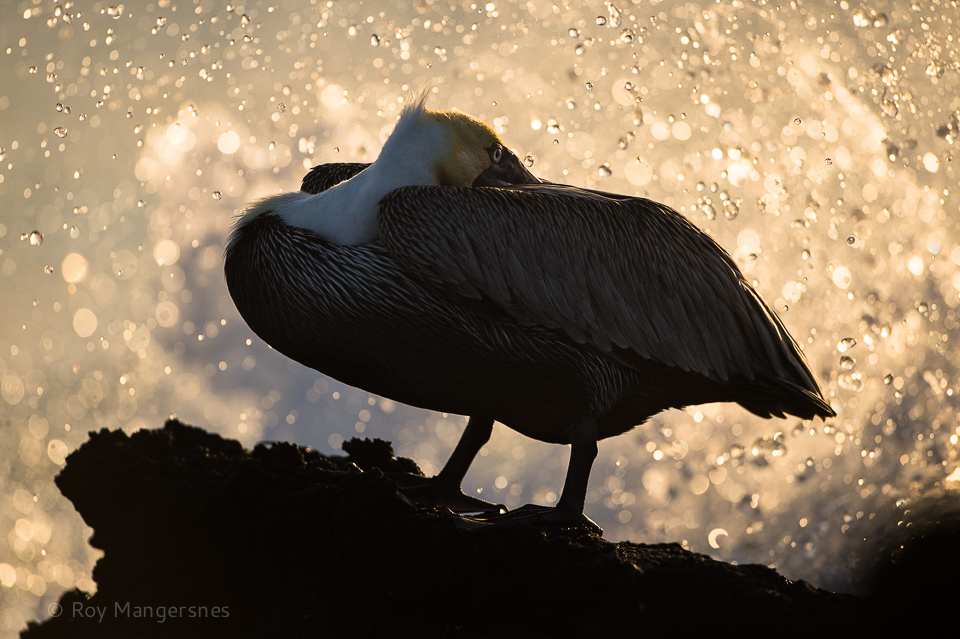 Day 14 – 05.05.2014 Our last morning on Galapagos was spent on the tiny island of Mosquera. Here we welcomed the sunrise with Sea Lions, Marine Iguanas and even a newly hatched Sea Turtle. After the landing we packed up and started our journey back to the mainland. 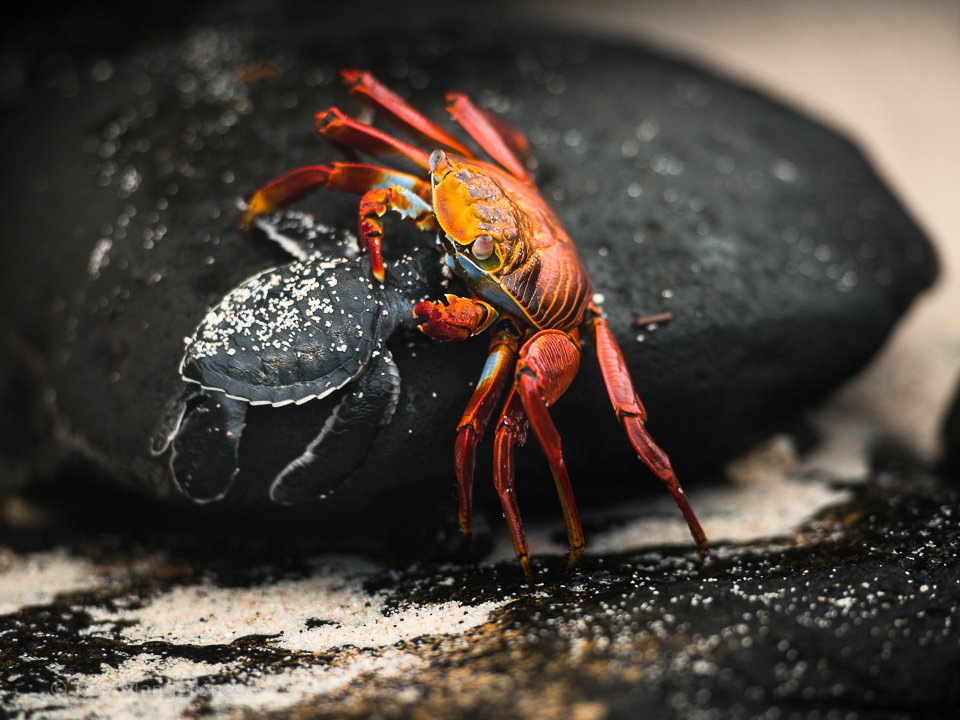 The evening was spent at a good restaurant in Quito and everyone seemed happy. Hopefully all our guests came home with some amazing footage, we are sure we did!

Let us know if you want to travel with us on a similar photo expedition to Galapagos. Our 2016 trip have been released and we have starting taking bookings. Our expeditions are extremely popular so make sure to secure your spot before it is to late.