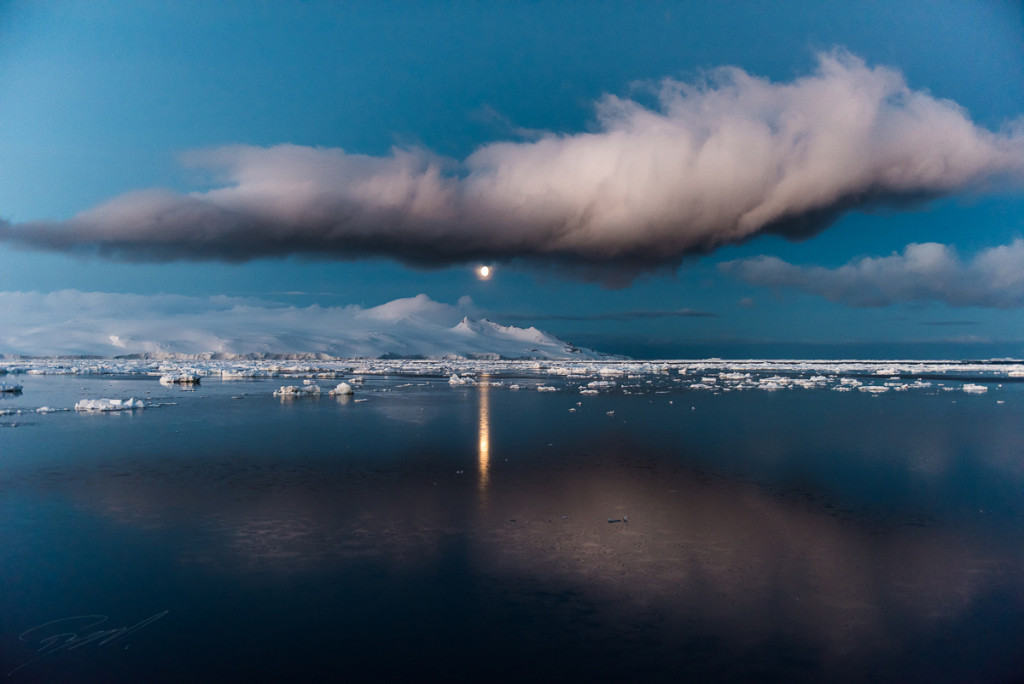 An excited group of photographers gathered in a restaurant in Ushuaia, Argentina, the first evening. You could feel the level of expectation in the room. People where talking about the Drake crossing, penguins, light and cameras. Everyone was there and we where ready for our first WildPhoto Travel exclusive photographic expedition to Antarctica.

Martin Enckell was the expedition leader on this adventure and with over 70 former trips to the peninsula we were in good hands. In addition Ole Jørgen, Roy and Eirik were also guiding.

Day 1 – 21.11.2014 We left Ushuaia in the evening in good conditions, and nice evening light. The Polar Pioneer was running smoothly and the 6 hour sail out the Beagle Channel was calm and pleasant.

Day 2 – 22.11.2014 The next morning we could feel the classic Drake swell. The conditions were good for albatrosses and petrels, but the light wasn’t great. Some people spent the day shooting from the stern, while others enjoyed lectures.

Day 3 – 23.11.2014 The next morning it was getting colder. Some albatrosses where still present, but more and more Cape Petrels where circling the Pioneer. Late in the evening we arrived at the South Shetlands. We considered a bonus landing but strong wind prevented us form doing so. 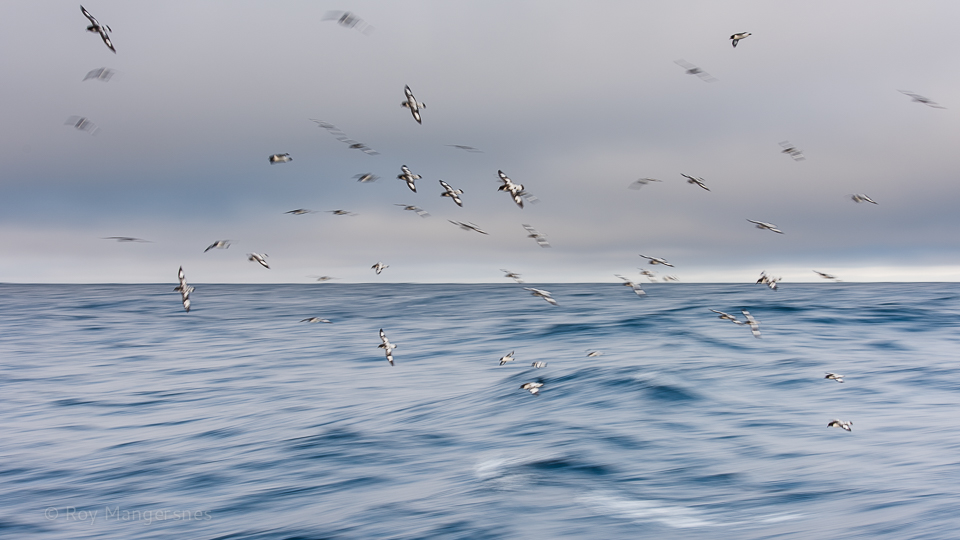 Day 4 – 24.11.2014 Due to rough conditions in the Antarctic Strait we changed our plan and headed south along the Antarctic Peninsula during the night. This morning we were greeted with stunning conditions south of Trinity Island. In Curtis Bay we dropped the Zodiacs and went for our first cruise. Soon after we were photographing our first penguins on ice. Both Adelie and Gentoo were seen. 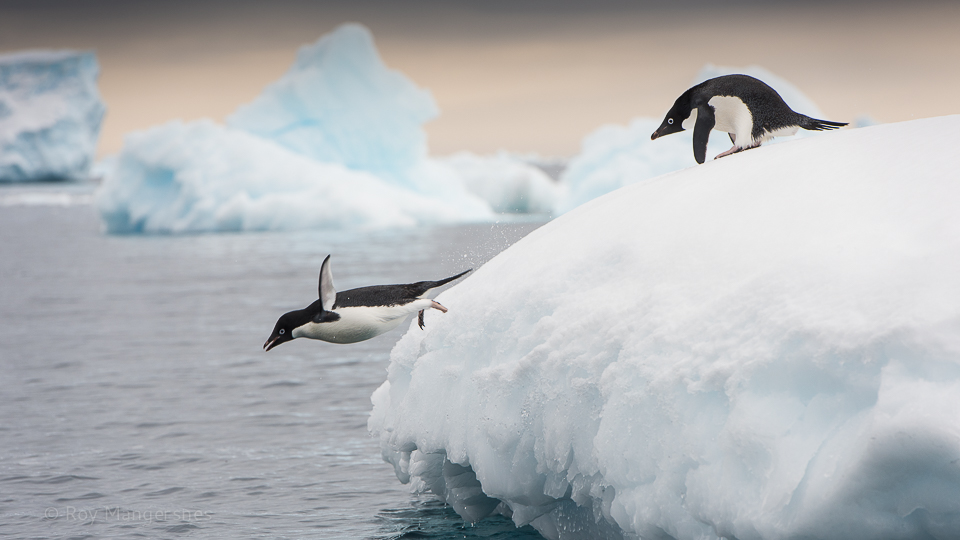 In the evening we continued south and cruised with the ship in beautiful Antarctic landscapes with icebergs and penguins southwest in the Gerlache Strait. 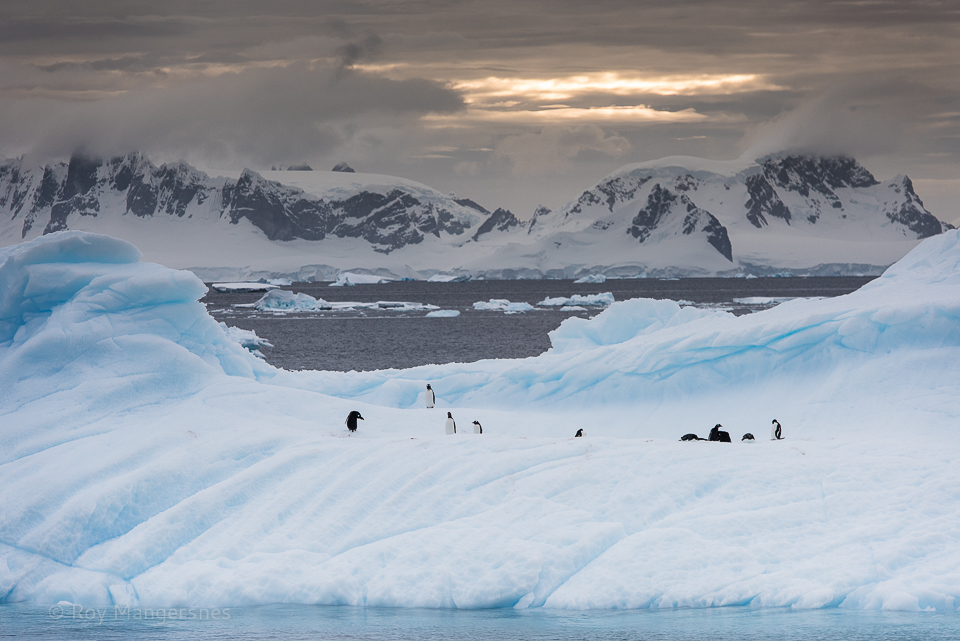 Day 5 – 25.11.2014 The morning started of grey, but we still went for an early morning landing at Cuverville Island. As the weather cleared we enjoyed the company of thousands of Gentoo penguins at their rookery. 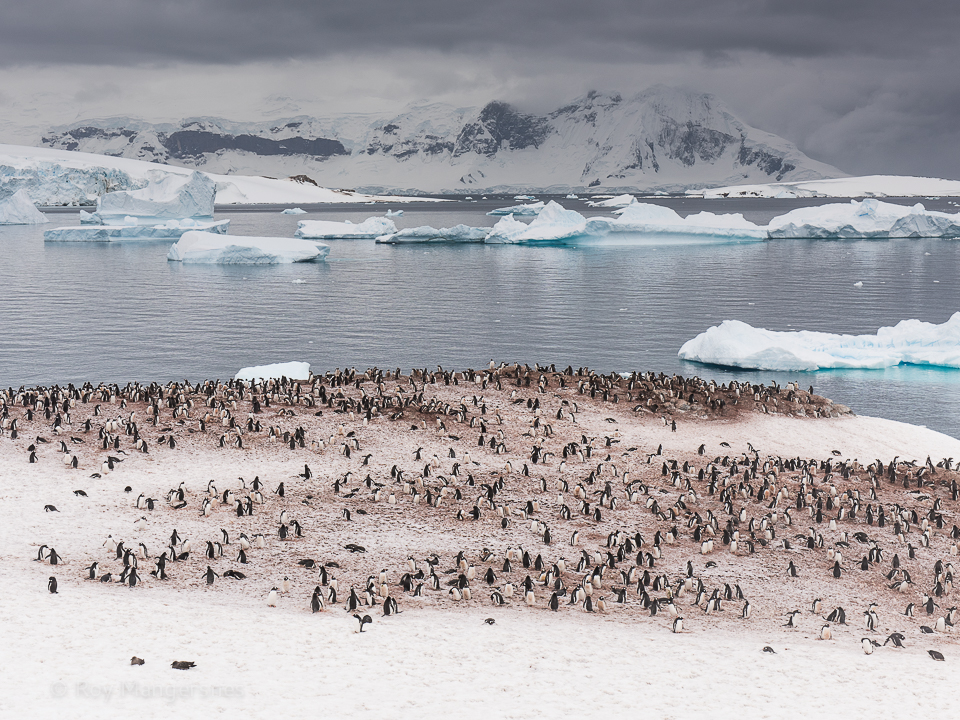 Around lunchtime we went for a Zodiack cruise further into the bay, near Danco where we found several Weddel seals and even more Gentoo penguins.

During lunch we moved slightly with the ship and found ourselves in Port Lockroy were several people visited the post office and shop. Others where photographing happily on land and in the water snorkelling. 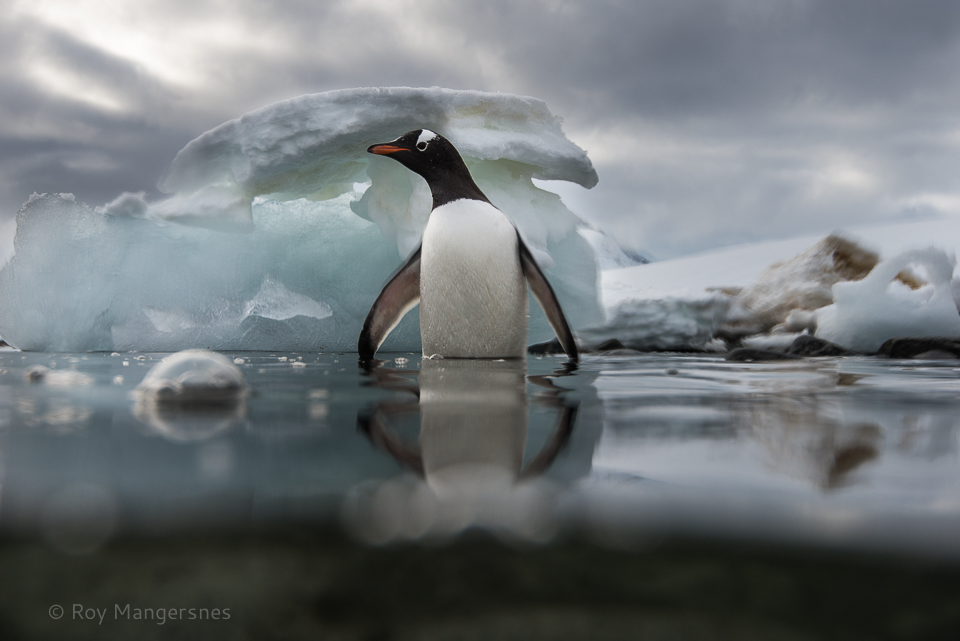 In the night we cruised down the Lemaire Channel in crystal clear conditions and stunning light. The scenery was breathtaking and everyone was on deck. In the distance we spotted our first Leopard seal of the trip. 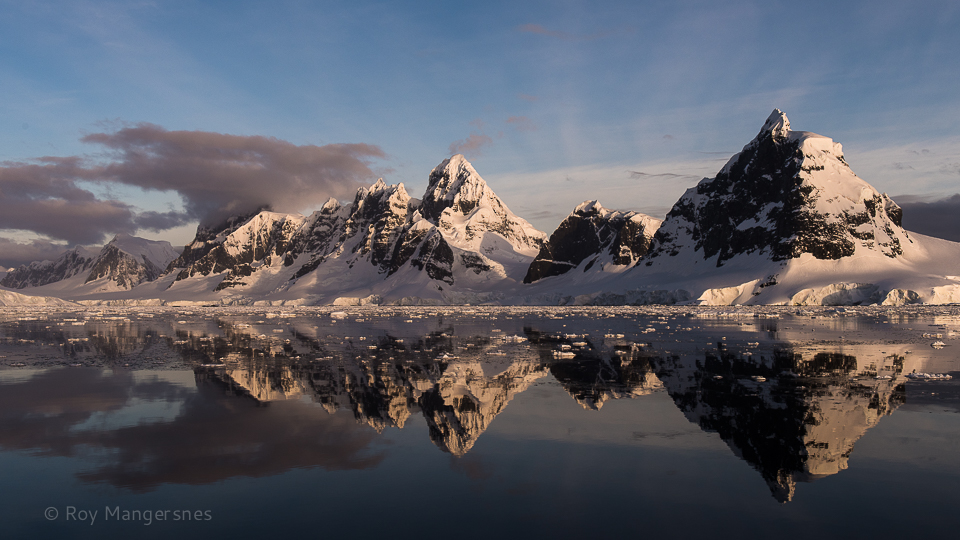 Day 6 – 26.11.2014 In the morning the conditions forced us to reroute and we found shelter in Paradise Harbour. Here we went out with Zodiacs and landed on a couple of smaller islands with nice Gentoo rookeries and a beautiful blue glacier backdrop. This was such a great site so we went back after dinner for one more session. 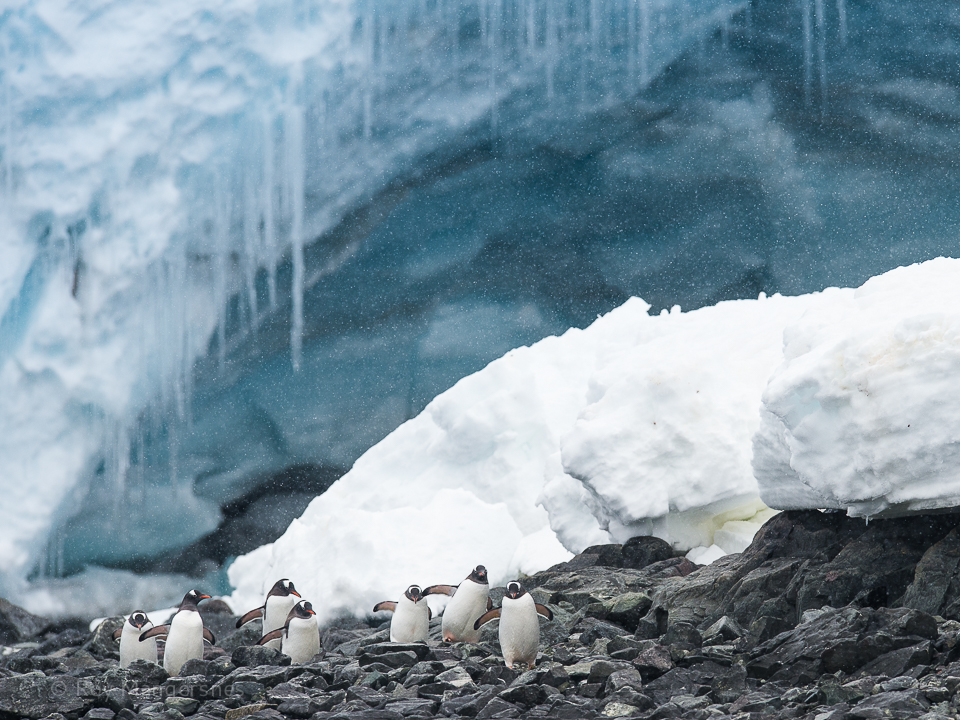 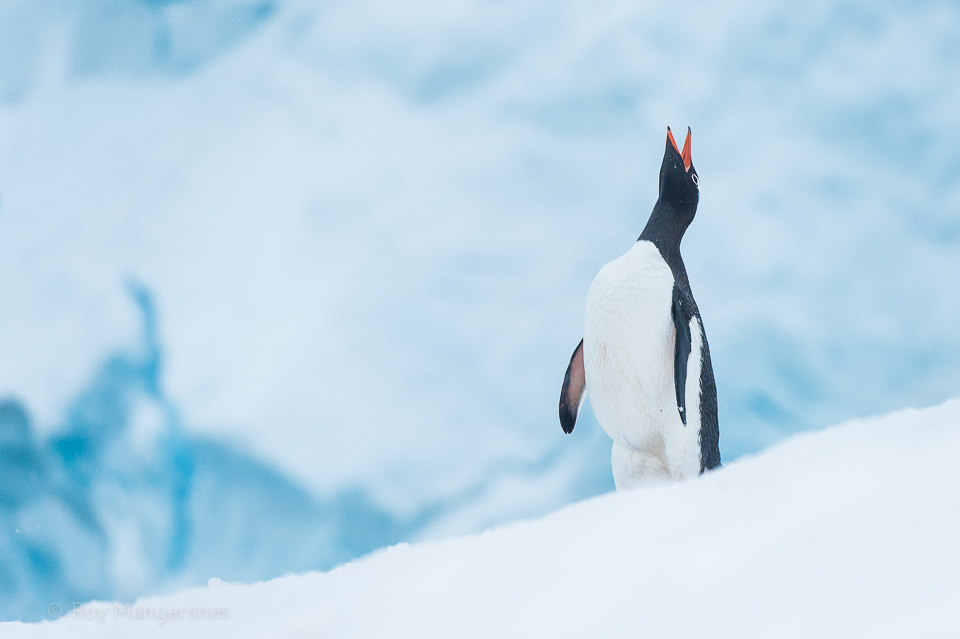 Day 7 – 27.11.2014 A blizzard passed during the night and the next morning we landed on Useful Island in pristine conditions. Great light and fresh snow were covering the rocky ground. Gentoos and Weddell seals greeted us on the beach, but most people climbed the hill to get their first sighting of Chinstraps. With a splendid view and beautiful fresh snow the photography was amazing and we stayed out as long as we could to take advantage of the conditions. 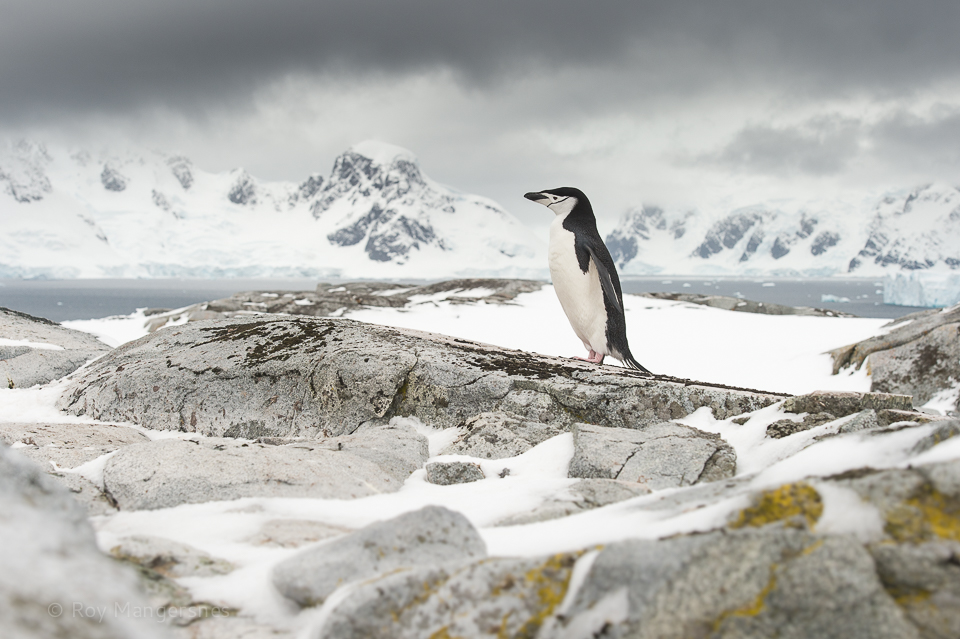 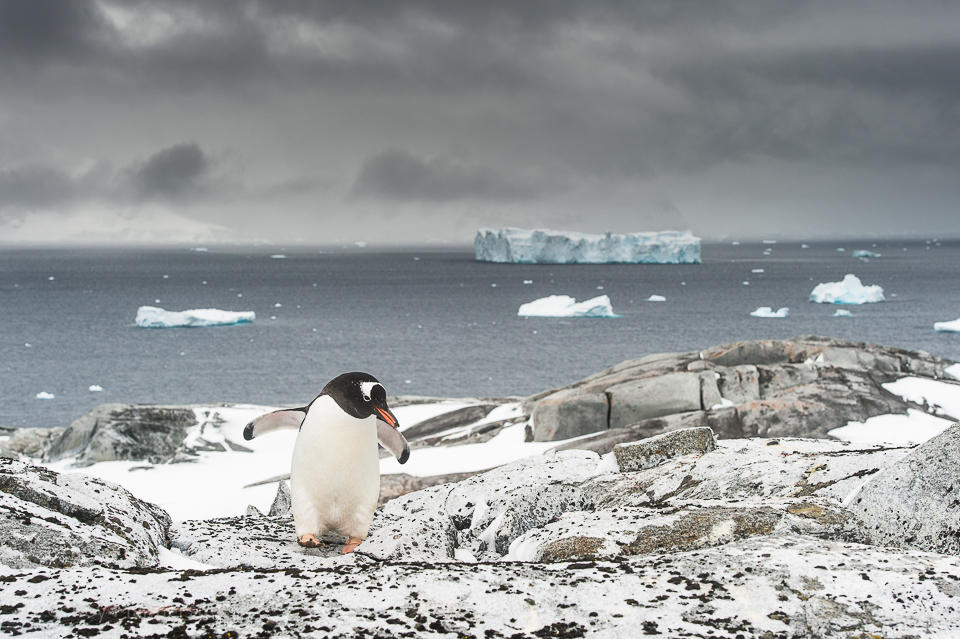 In the afternoon we cruised through some stunning iceberg landscapes before arriving at Neco harbour for a continental landing. Gentoos were photographed on the beach and also in the clear water by the snorkelers. The most adventurous even found themselves taking the Antarctic plunge here.

Day 8 – 28.11.2014 This morning we were treated with favorable conditions at a tricky landing site called Astrolabe Island. Already on our way in we spotted our first Leopard seal circling a group of penguins on an iceberg. As we were landing on the island, another large Leopard seal came close to check us out. The snorkelers got their first images of this apex predator. On land we enjoyed Chinstrap, Adelie and some Gentoo penguins, as well as lots of Weddell seals on land. 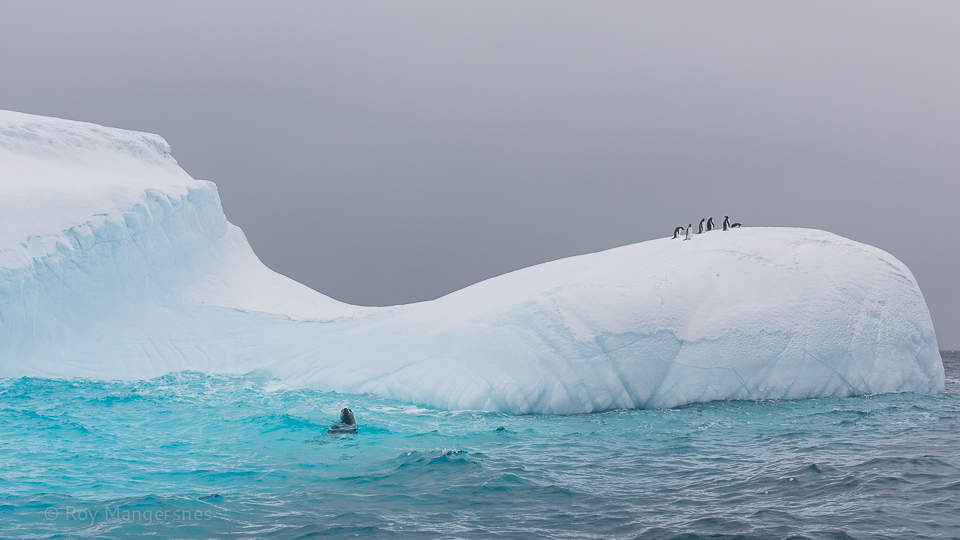 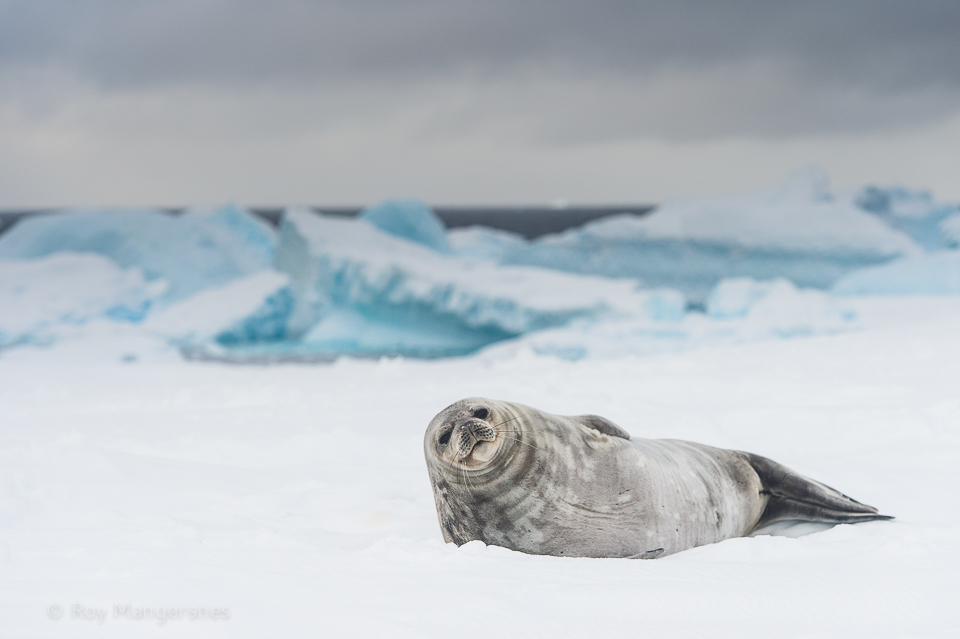 After dinner we went on another Zodiac cruise around the island and photographed icebergs and penguins in the landscape until we suddenly came across our third Leopard seal of the day, on an ice floe. Everyone got great images from this session. 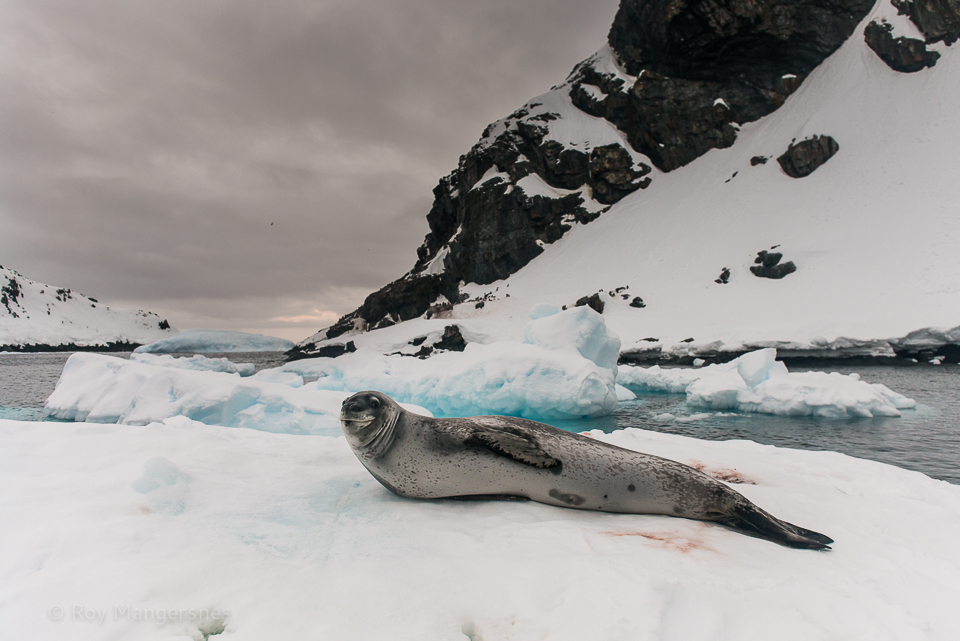 Day 9 – 29.11.2014 We landed just after breakfast on an overcrowded Gourdin Island. Every little rock had an Adelie penguin on it! Also this morning we were welcomed by the local Leopard seal and the snorkelers were ready. Some nice images came out of this landing both in the water and on land. 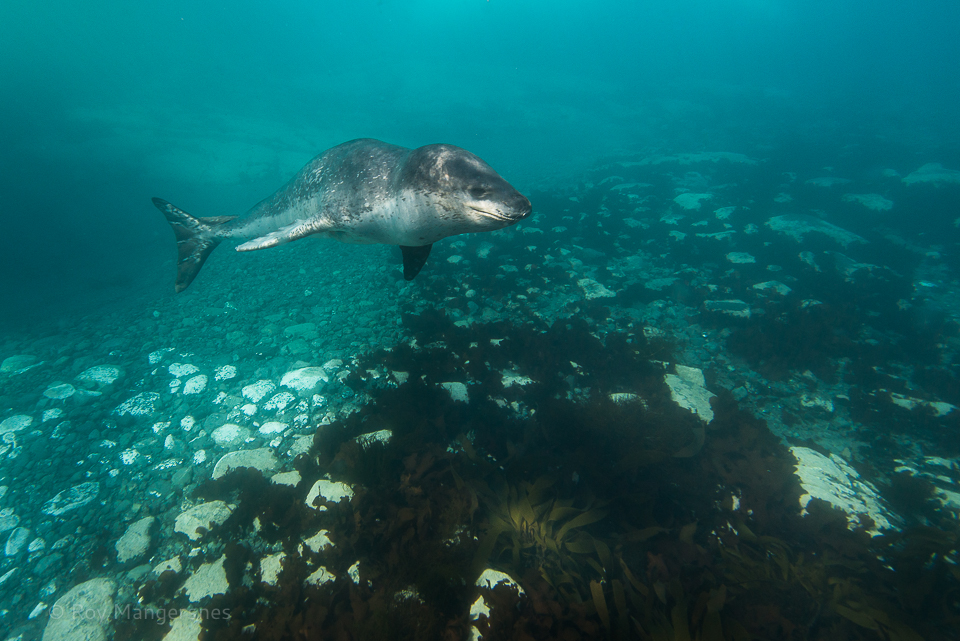 The potential of this site made us return after dinner to enjoy the evening sun with the Adelies. The light was outstanding and thousands of images were taken as penguins were jumping from the ledges, porpoising and posing in warm backlight conditions. 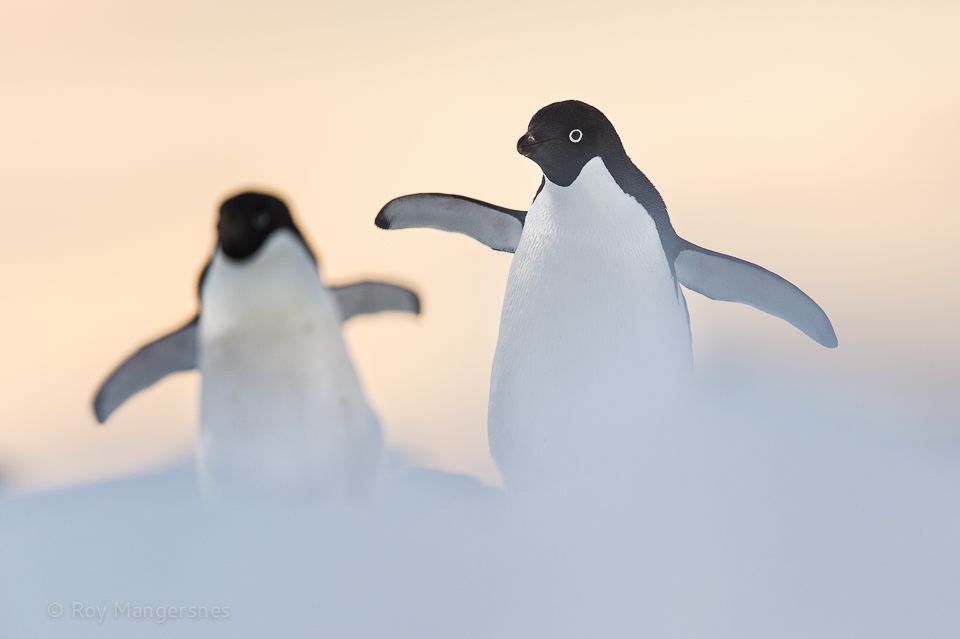 After sunset the moon was out on a pink Antarctic sky so we continued shooting from the Zodiacs. 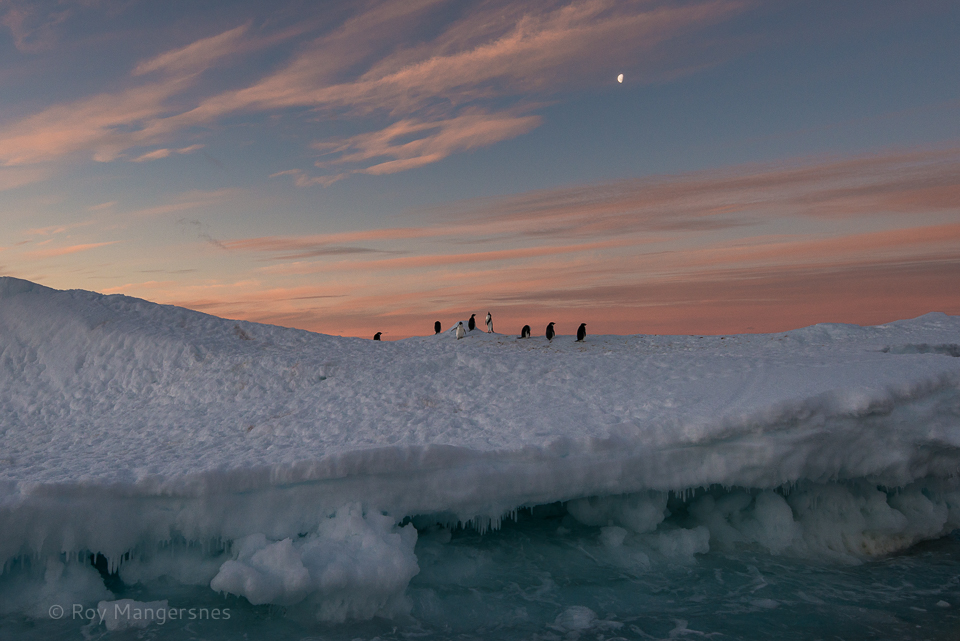 Day 10 – 30.11.2014 In the morning we entered the Antarctic Strait in calm conditions and cruised with good speed towards the Weddell Sea. Tabular icebergs were surrounding us in all directions, reflecting against a calm ocean surface. Several Crabeater seals and penguins were seen. 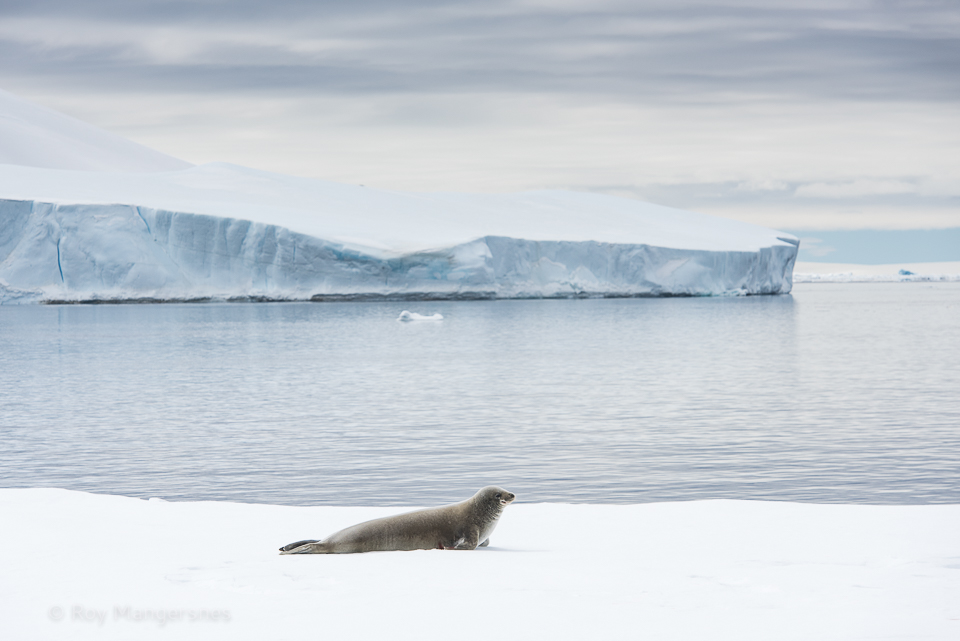 In the evening we did a short continental landing on Brown Bluff before heading out on the calm sea to shoot icebergs against the painted sky. Beautiful blue ice was reflecting in the water, coloured by the pink sky.

Some stayed out all night and kept photographing penguins on passing ice floes with a new moon hovering above, long into the next morning. Just before sunrise the sky was on fire, and the cameras went warm. 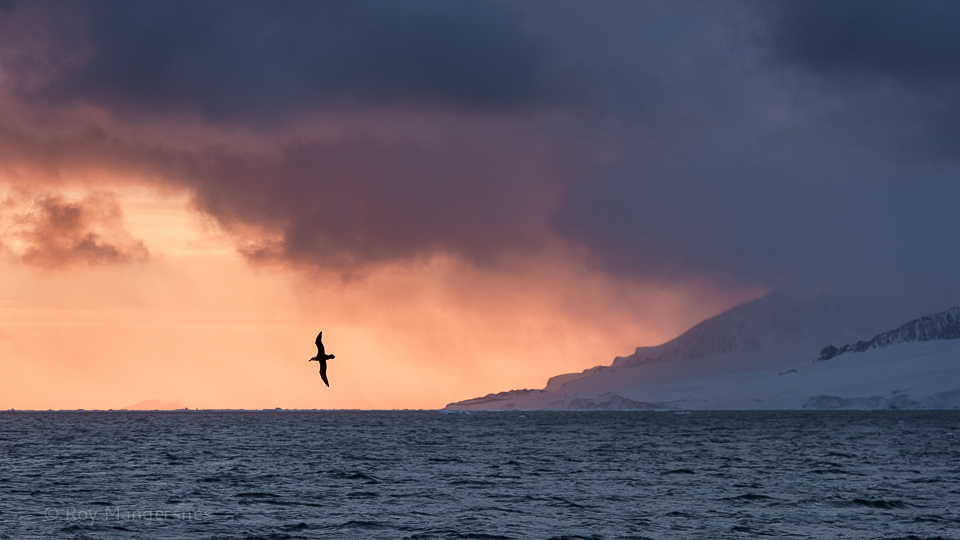 Day 11 – 01.12.2014 During the early morning we were crossing the Brabant Strait and arriving at Livingstone Island in the South Shetlands just after lunch. We boarded the Zodiacs and had a great bonus landing with Elephant seal cubs, as well as Gentoo penguins and Southern Giant stormpetrels. Some of the seal cubs were extremely friendly both on the beach and in the water with the snorkelers. 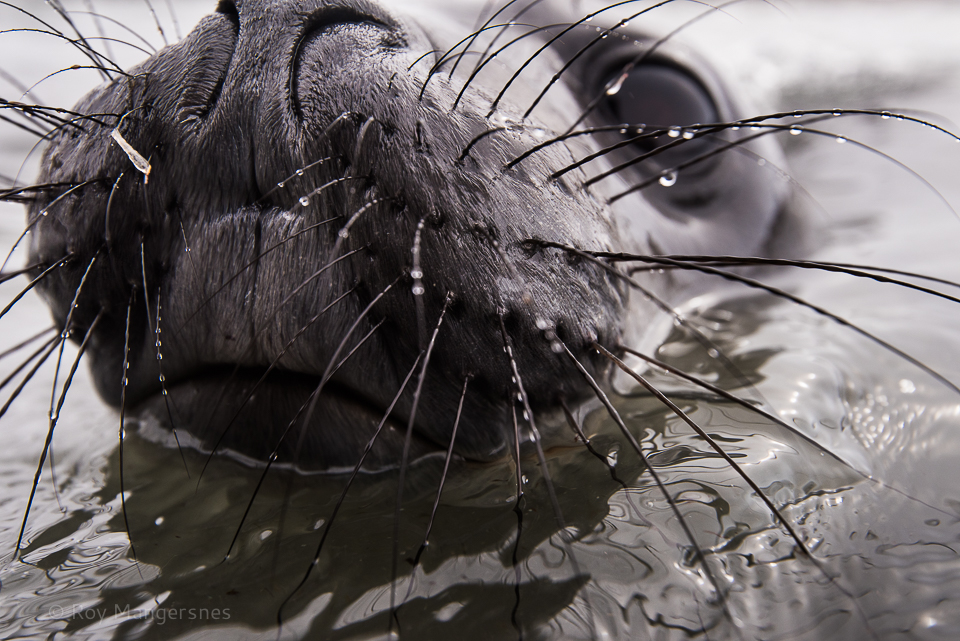 Day 12 – 02.12.2014 In the night we moved across to Halfmoon Bay for a sunrise landing. It was a stunning morning with low clouds hanging over the surrounding mountains and warm sunlight hitting the Chinstrap rookeries. 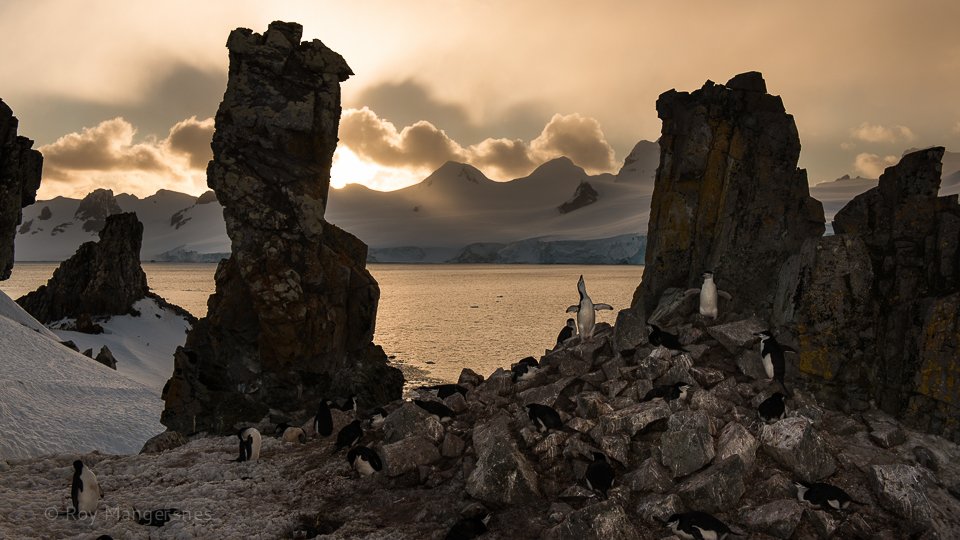 After breakfast we aborted a landing at Yankee and went back to Halfmoon for another landing at this magical location. Fortunately for some of the snorkelers we were greeted by a large Leopard seal on the beach, the seventh on this expedition. It turned out it was a rather curious animal and we got some very interesting underwater images. 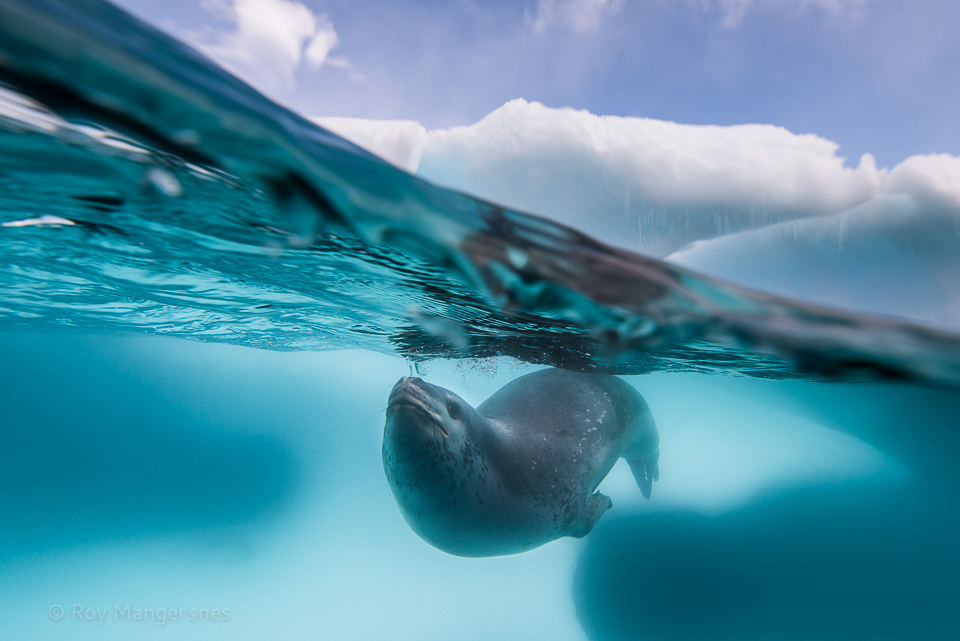 In the afternoon we headed west and north into the Drake Passage.

Day 13 – 03.12.2014 Conditions were favourable on the Drake and we had a gentle swell. Some Cape Petrels and the odd Wandering Albatross were following the ship, but lack of wind made the conditions difficult for the stormriders.

Day 14 – 04.12.2014 Early in the morning the wind had picked up and at sunrise several Black-Browed, Light-Mantled, Wandering and Grey-headed Albatrosses were following us on the last leg. 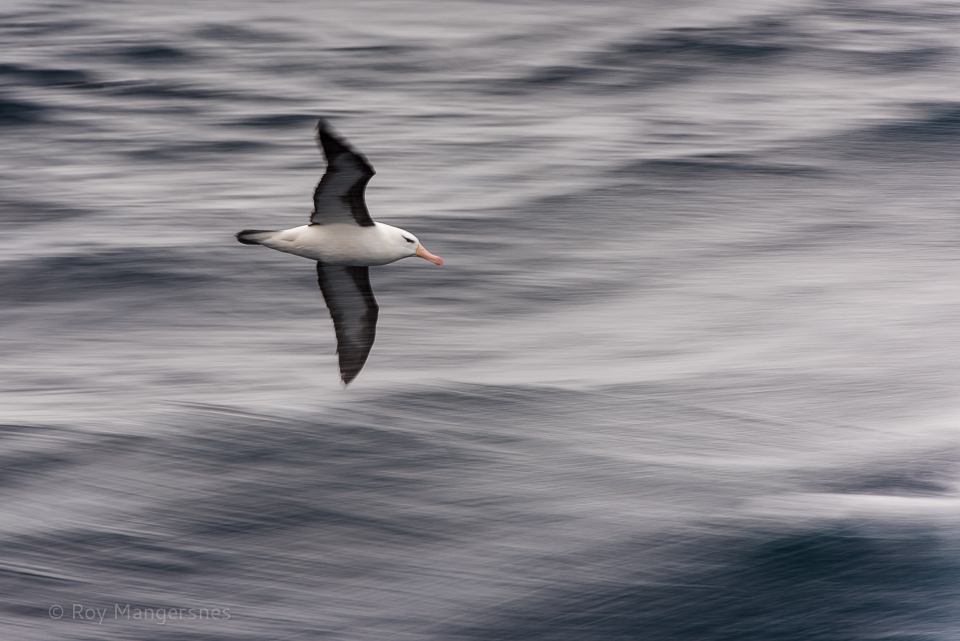 In the night we anchored in the Beagle channel before docking early the next morning. The first WildPhoto Travel full charter Antarctic expedition had come to an end with great success!

Let us know if you want to travel with us on a similar photo expedition in the future!