Day 1 – 3.9.2020 We left Longyearbyen in the afternoon and travelled out through Isfjorden with an excited group of photographers from Norway, Italy, and Germany, hosted by both Ole J. Liodden and Roy Mangersnes. The clouds were low and we soon lost sight of civilization. During the night we continued north along the west coast.

Day 2 – 4.9.2020 At breakfast we entered Sørgattet, the entrance to Smeerenburg. Here we had our first encounter with a Polar bear roaming the shores. 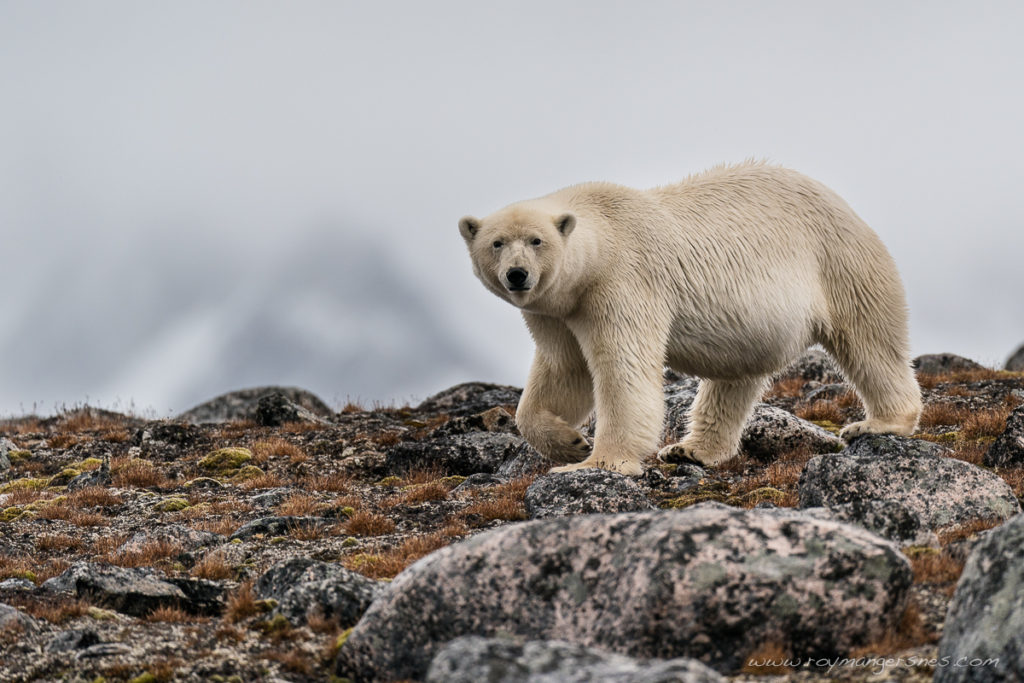 In the evening we did a zodiac outing in Raudfjorden. Most of the birds had left the area, but the landscape was just as beautiful. Late in the evening we returned to the ship and started sailing east towards Woodfjorden. 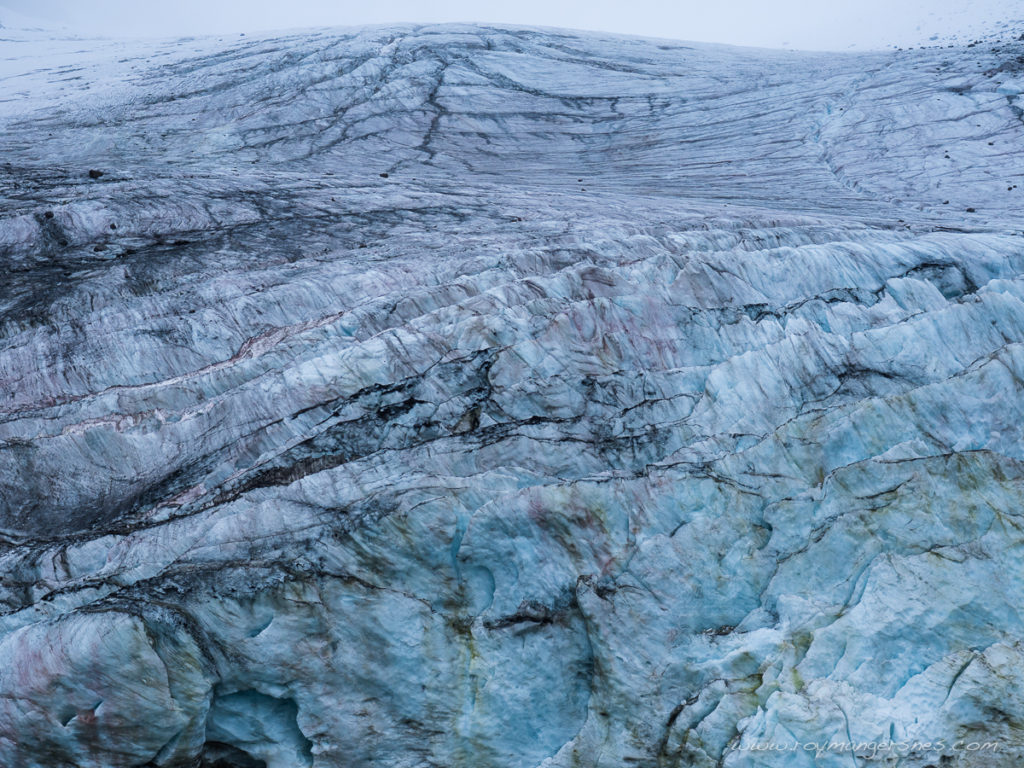 Amazing details and colors in the old glaciers in Raudfjorden.

Day 3 – 5.9.2020 In the morning we anchored outside Monaco glacier in Liefdefjorden in dense fog. After breakfast the fog started to lift and we went out with our zodiacs. We had a beautiful cruise the morning with massive icebergs, slush ice and lots of birds. Some Ivory gulls were spotted as well as a couple of bearded seals in the water. Everywhere we saw Kittiwakes, Fulmars and Glaucous gulls on ice and in the water. 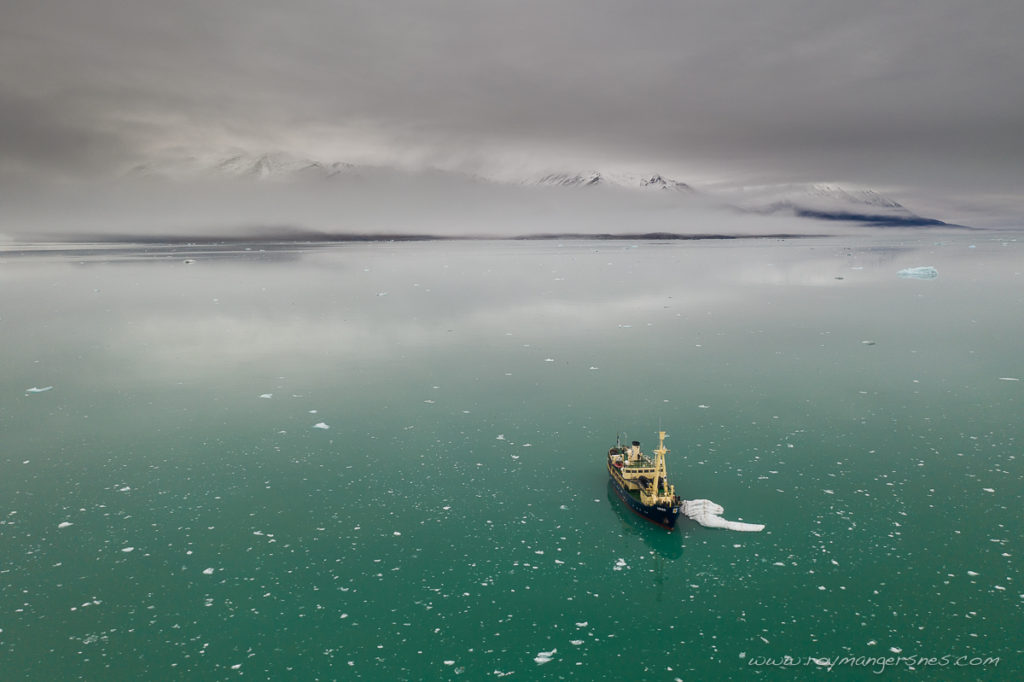 Parked next to an iceberg in Liefdefjorden. 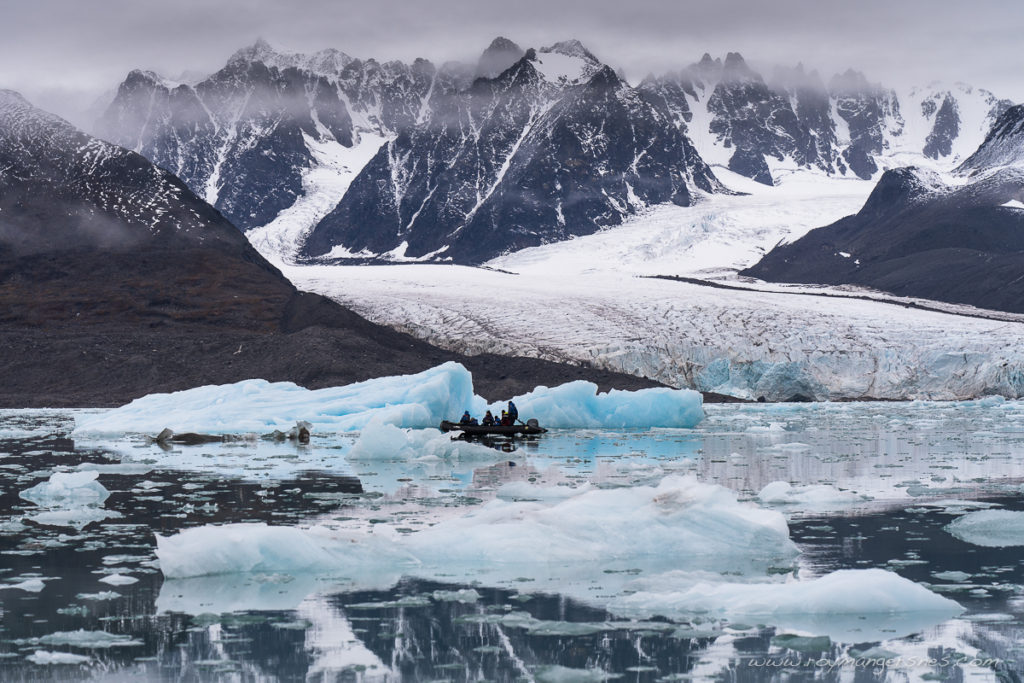 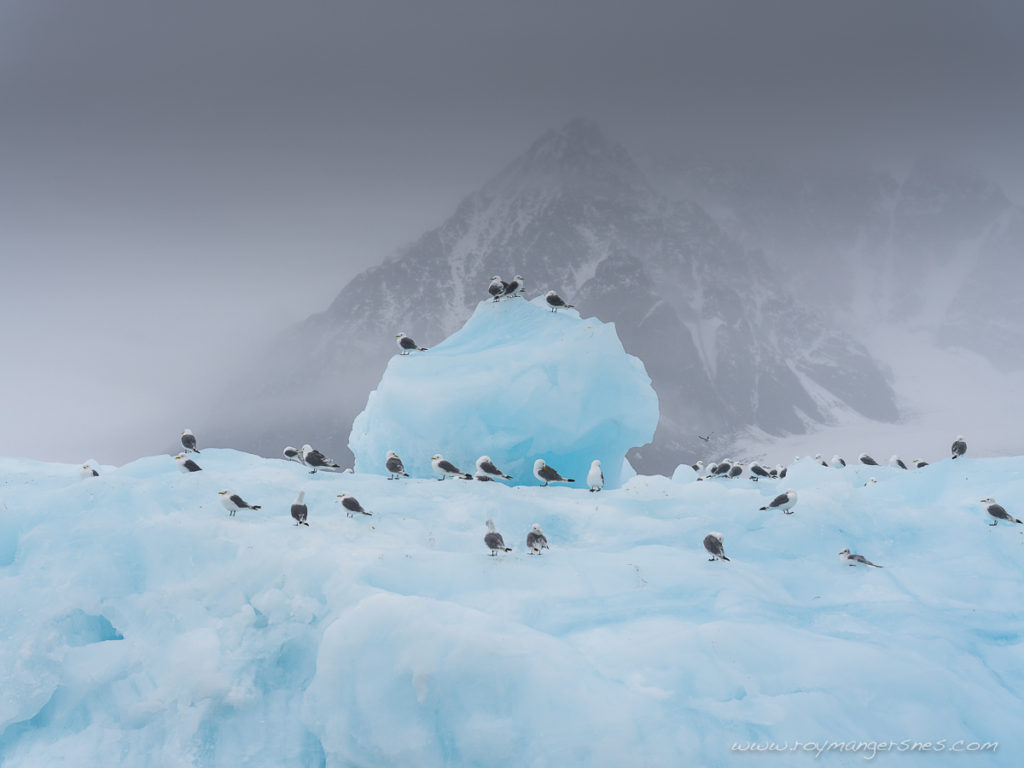 Kittiwakes on blue iceberg in Liefdefjorden. 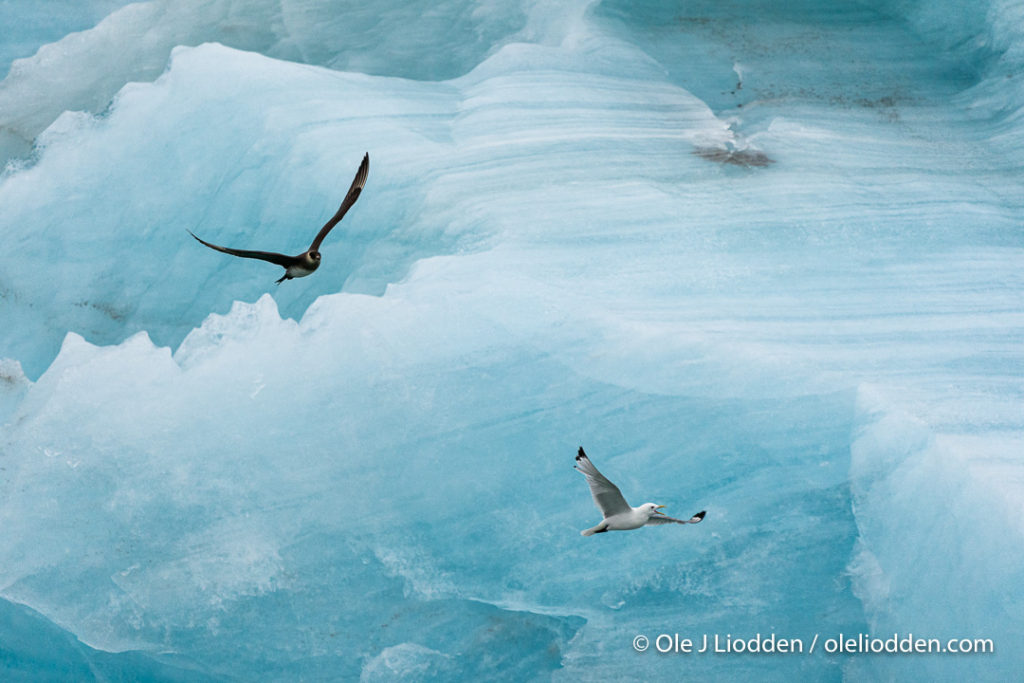 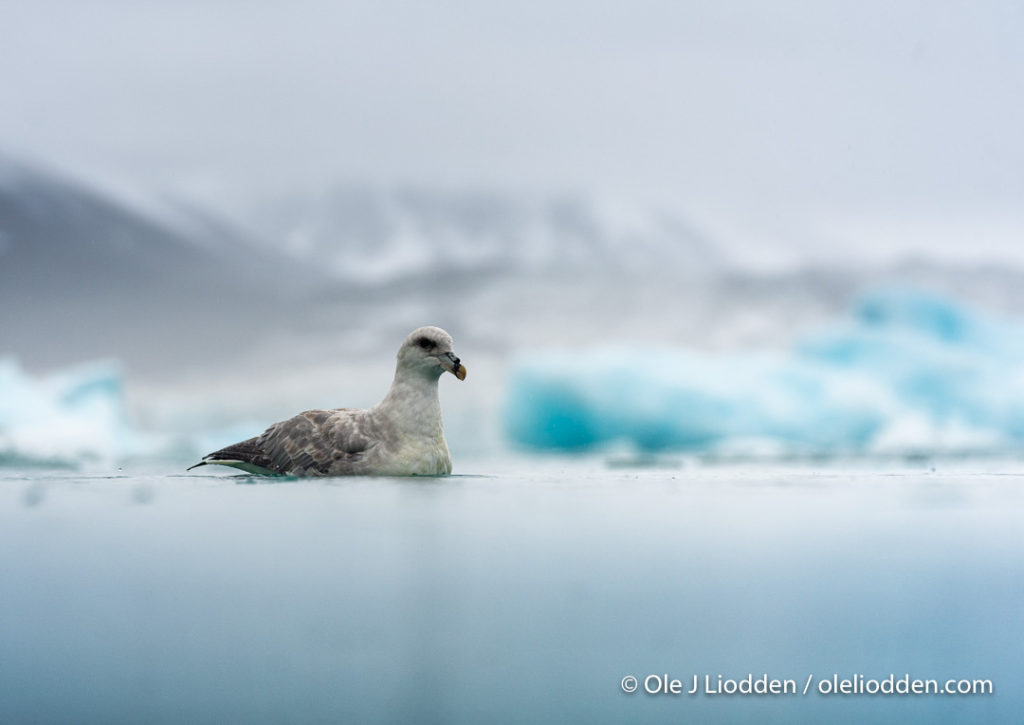 Northern Fulmar on the water near Monaco glacier.

In the evening we got to the open sea and headed northwest towards the packice.

Day 4 – 6.9.2020 Most of the day was spent at sea, but in the afternoon we met the ice edge. We spent the evening in the ice searching for wildlife. One highlight was the many Ross’ gulls that we had around the ship as well as other high Arctic specialities like Ivory gull and Pomarine skua. 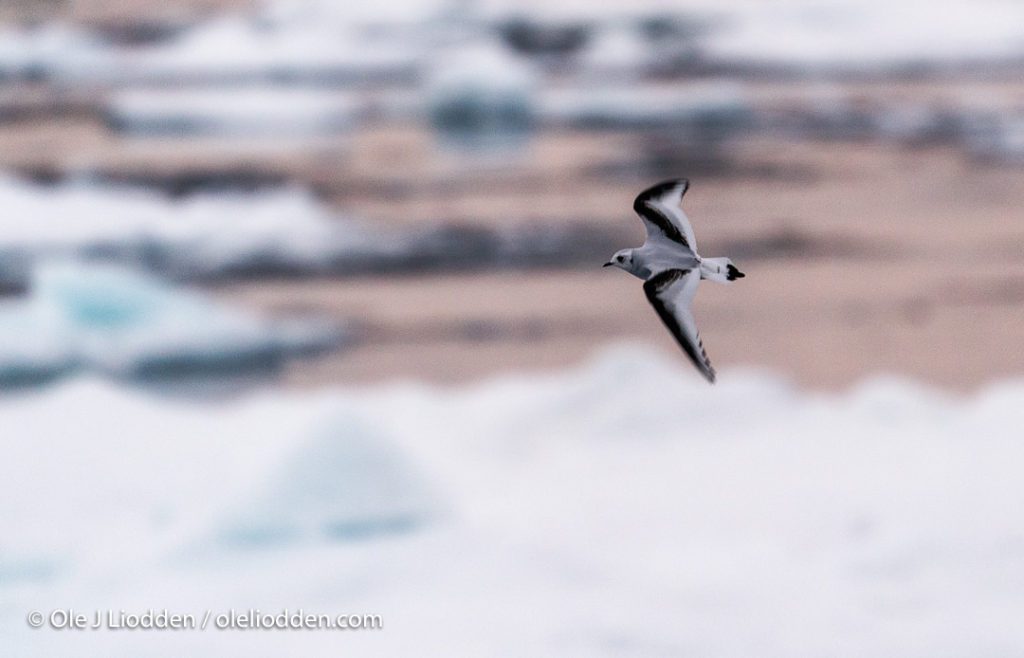 Day 5 – 7.9.2020 The entire day was spent searching the pack ice. Groups of Harp seal were seen and constantly we had Ross’ gulls circling the ship. In total we estimated to have seen 200 of these extremely rare birds. At dinner time we left the ice, and headed towards Hinlopen strait. 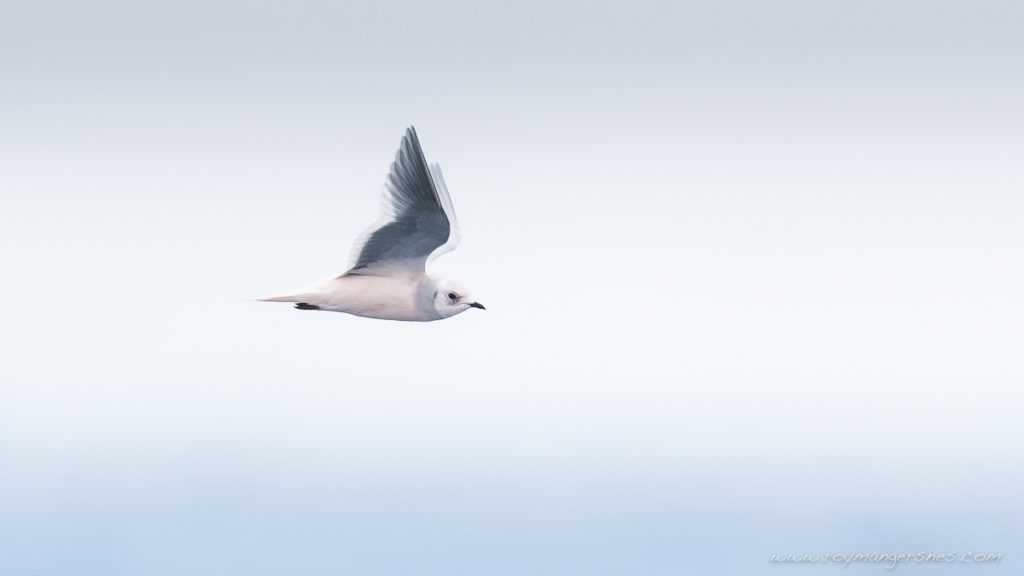 Day 6 – 8.9.2020 As we got closer to Spitsbergen again and could see the entrance of Hinlopen we spotted two groups of White-beaked dolphins, the northern most dolphin in the world. 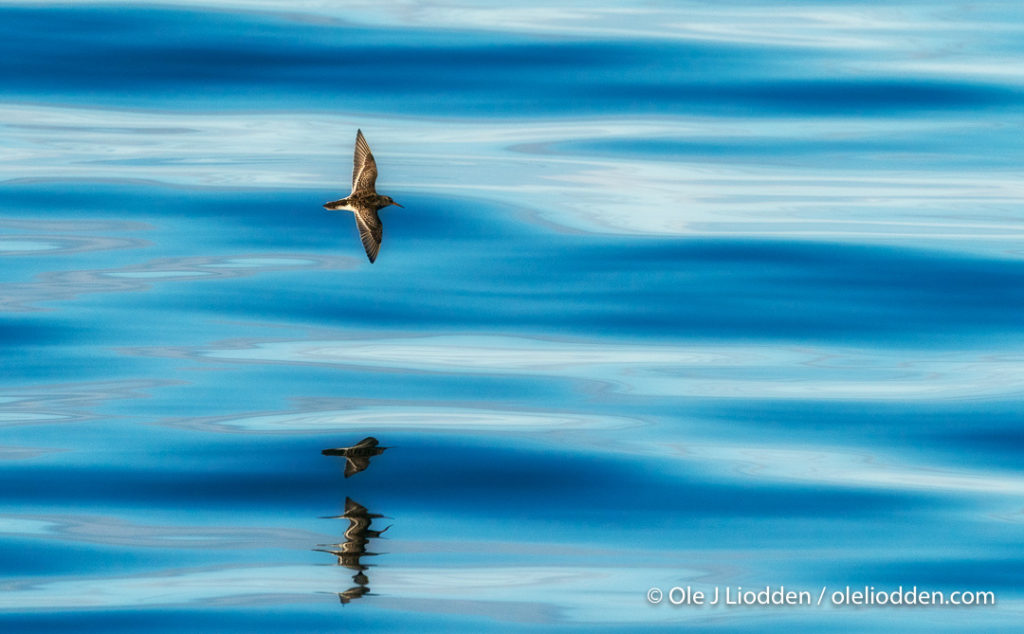 Purple sandpipers where also on the move over the open seas. 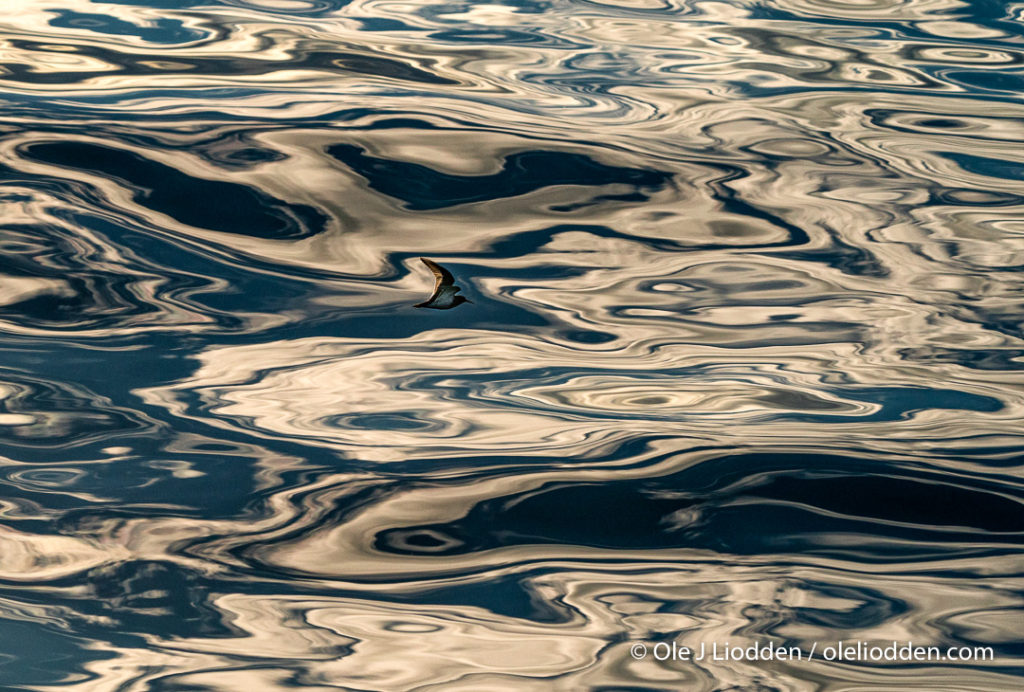 Purple sandpiper and beautiful reflections on the surface.

After dinner we had a great encounter with a Polar bear on the beach. It was one of 5 bears that had gathered in the area where a Sperm whale had washed ashore. The other bears were sleeping happily in the surrounding area. 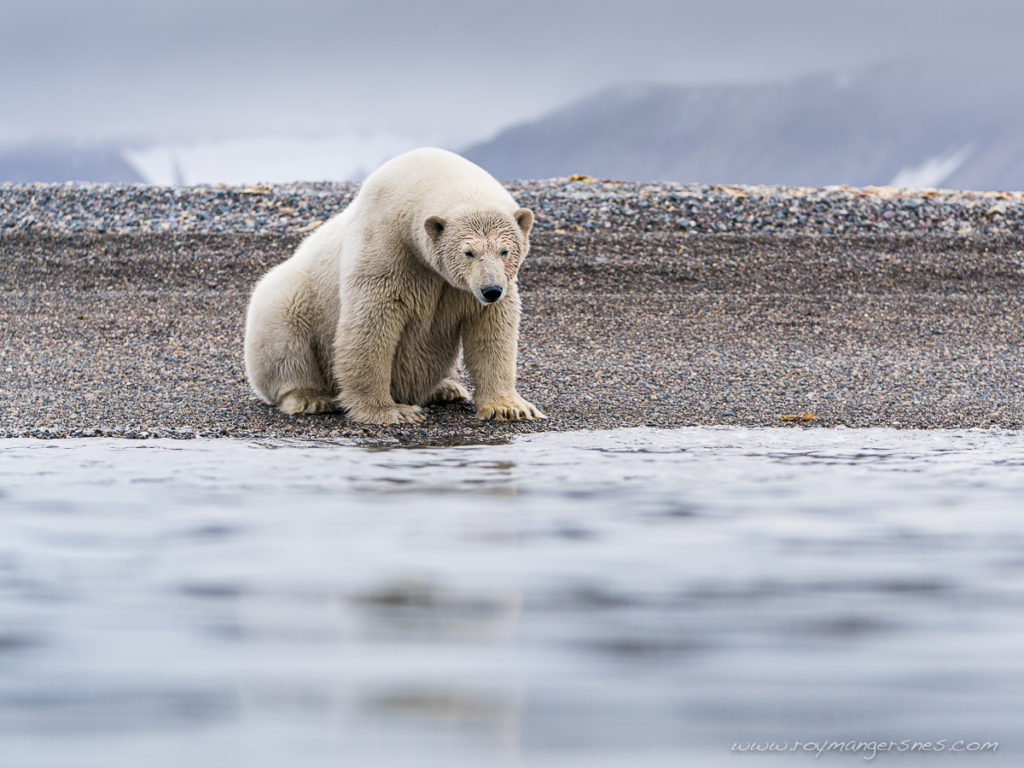 One of the five Polar bears that was seen along the beach. 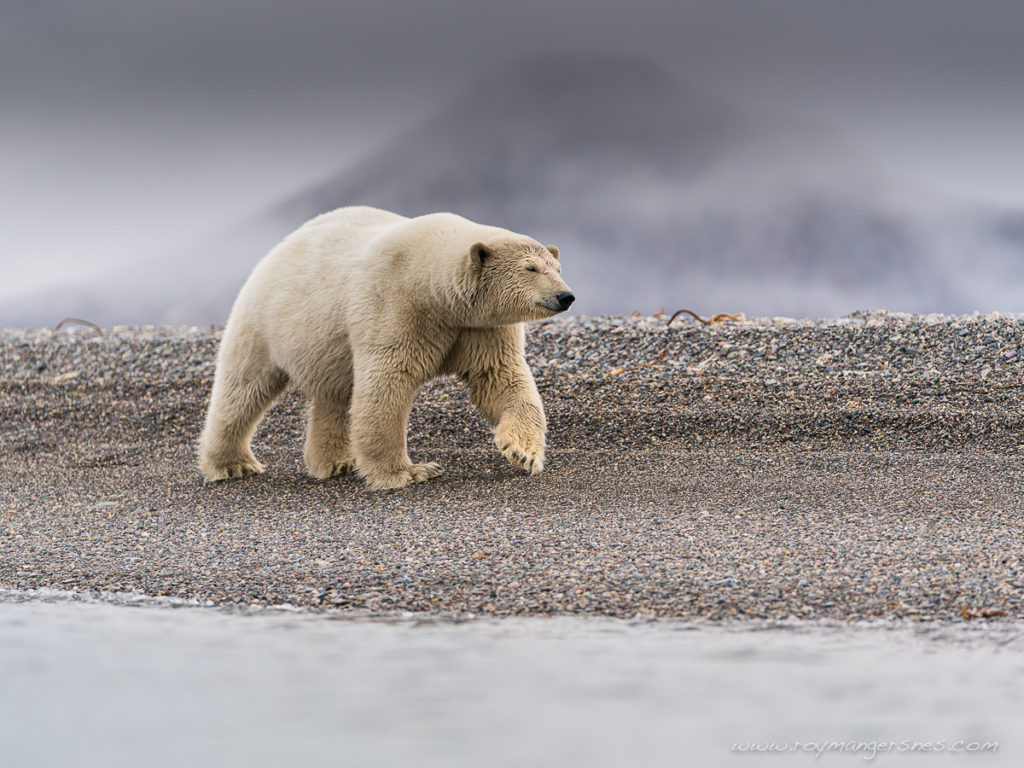 Even with four other bears around this young animal was very relaxed as it walked the shoreline.

Day 7 – 9.9.2020 During the night we moved down Hinlopen to the Austfonna glacier, which is the third largest glacier front in the world with its 190 kilometers. Everyone were on deck at 5 in the morning shooting the first light over the glacier. We followed the edge for a while and after breakfast we started traversing the glacier ice that had been calving off, to see if we could find any wildlife. 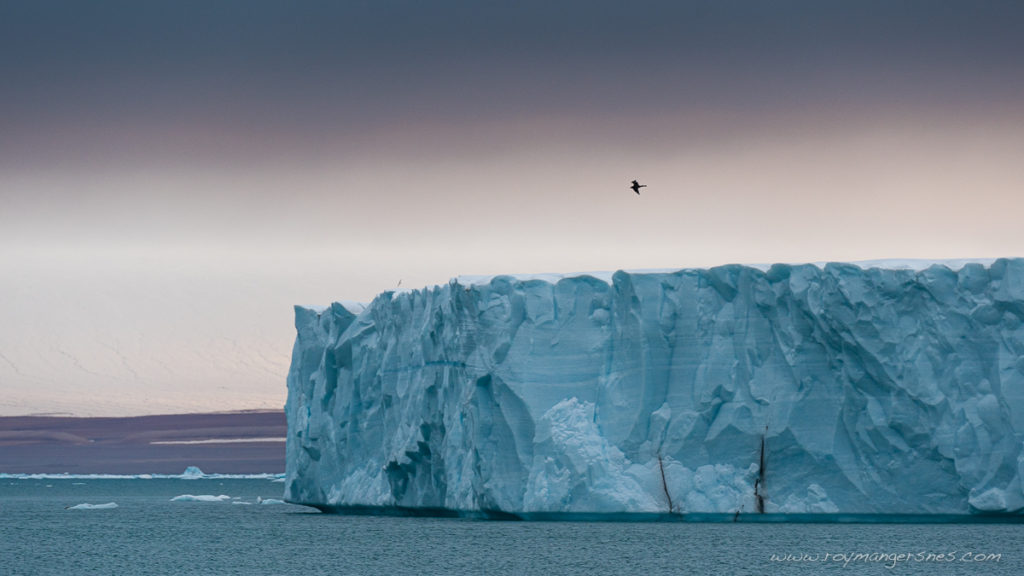 Pomarine skua flying over the Austfonna glacier at dawn. 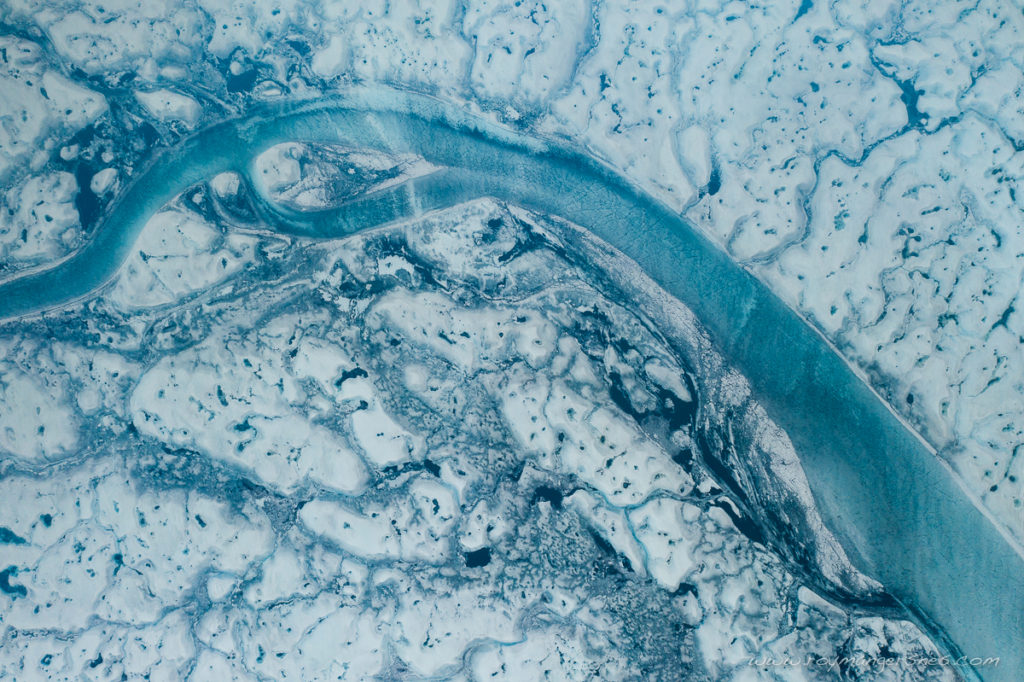 One of the cold rivers on top of Austfonna glacier.

In the afternoon we arrived at a Walrus haul out beach further north in Hinlopen and went out to land after dinner. The weather was a bit dark and wet, but we had a couple of hours ashore with several curious Walrus. 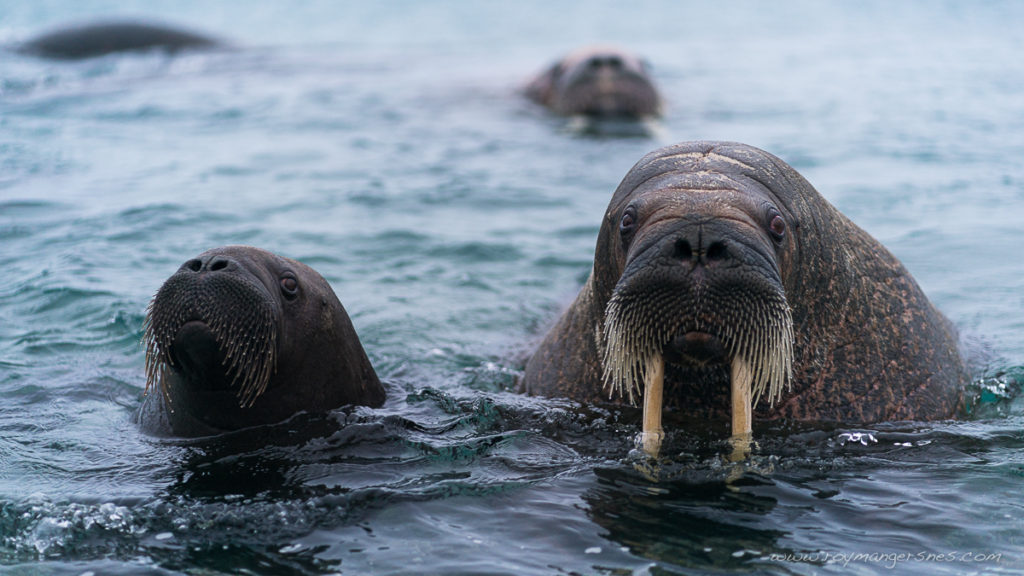 Walrus mother and her calf being curious.

Day 8 – 10.9.2020 Based on weather and wind charts we decided to head for the north west corner of Spitsbergen, and dodge the dark and wet conditions in Hinlopen. It seemed to be a good call as we woke up to blue skies and gentle winds. Just as we arrived at Smeerenburg we spotted White-beaked dolphins again and got a nice close look. Approximately 40 animals were seen, and one group came close to bowride our ship. 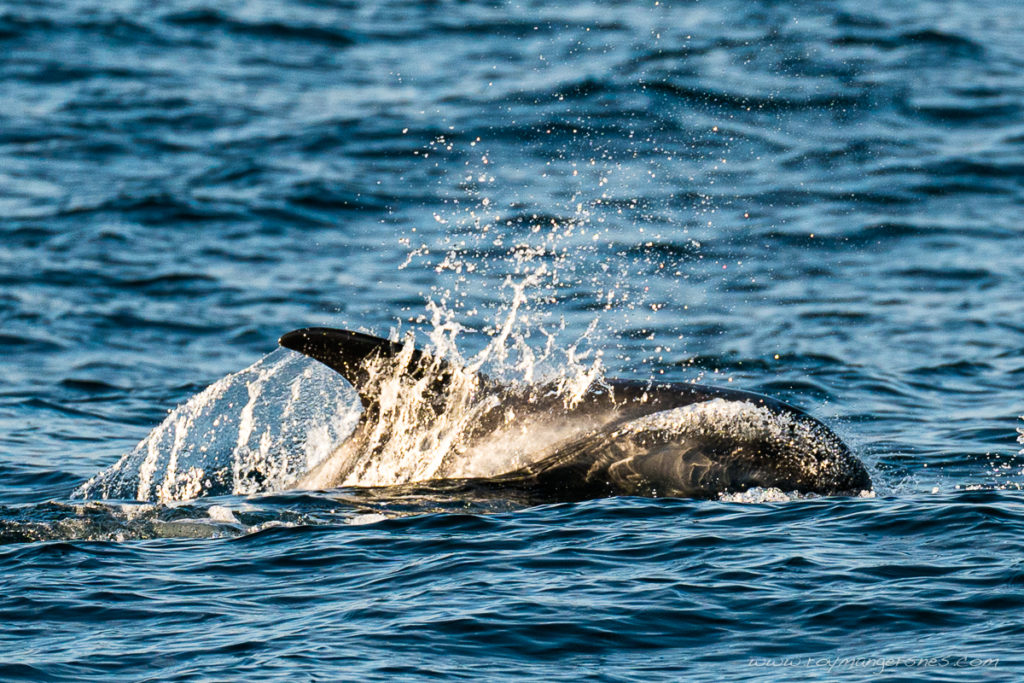 White-beaked dolphin porpoising along the ship.

Around lunchtime we entered Fuglefjorden and had a nice ship cruise among high mountains and glaciers before heading back out in Smeerenburg. 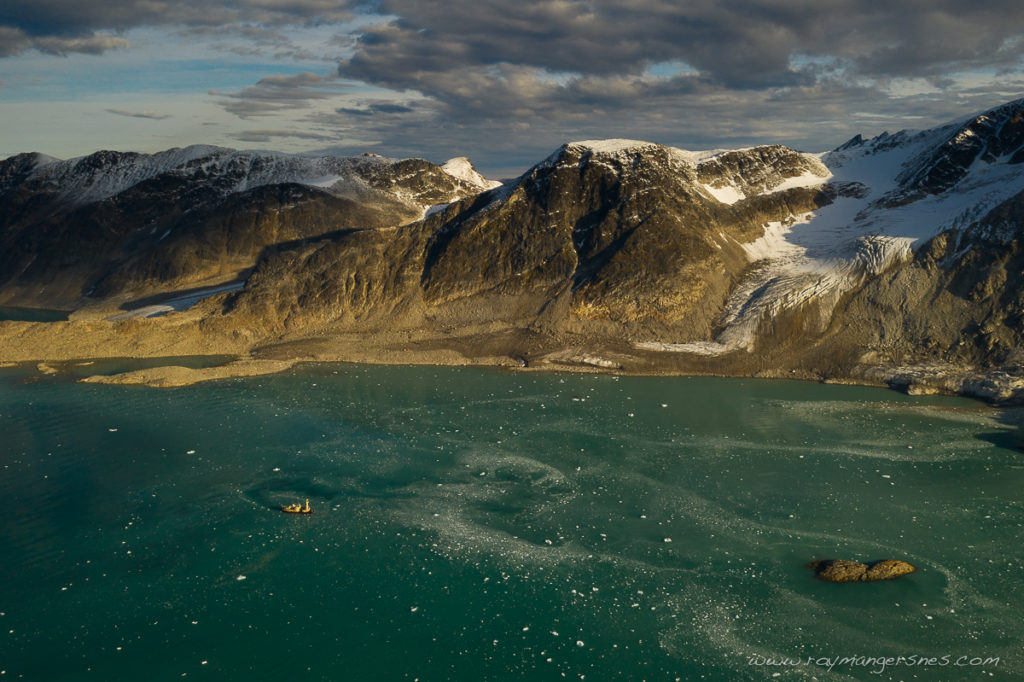 The MS Origo on location in Fuglefjorden.

In the evening the light started of nice and then turned amazing and we ended up spending the entire night photographing walrus at a secret spot, only to return at 23:30. 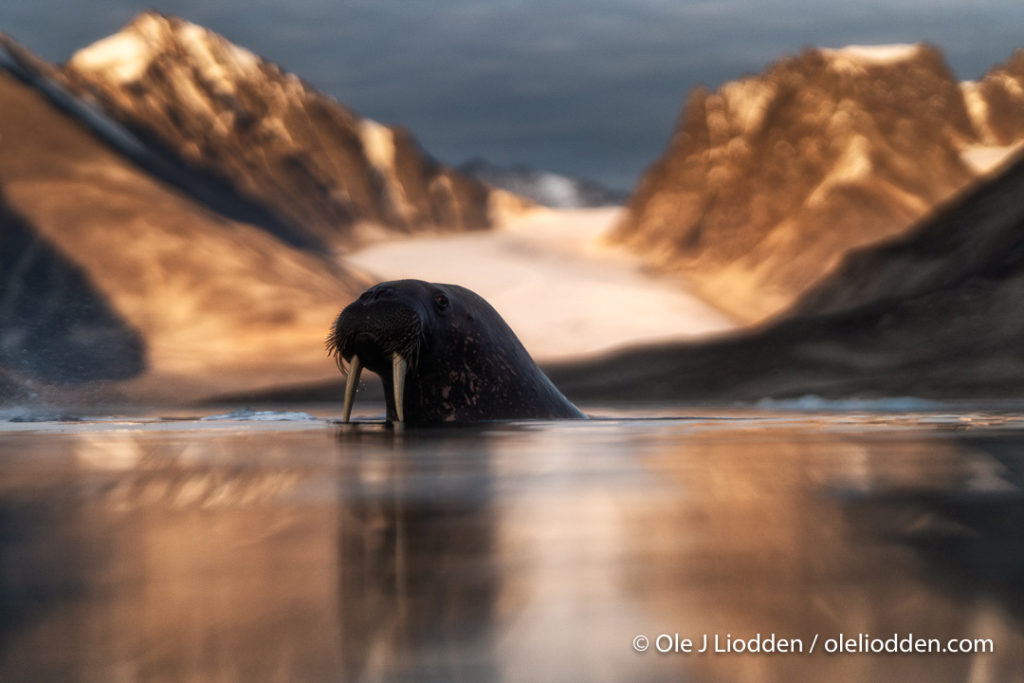 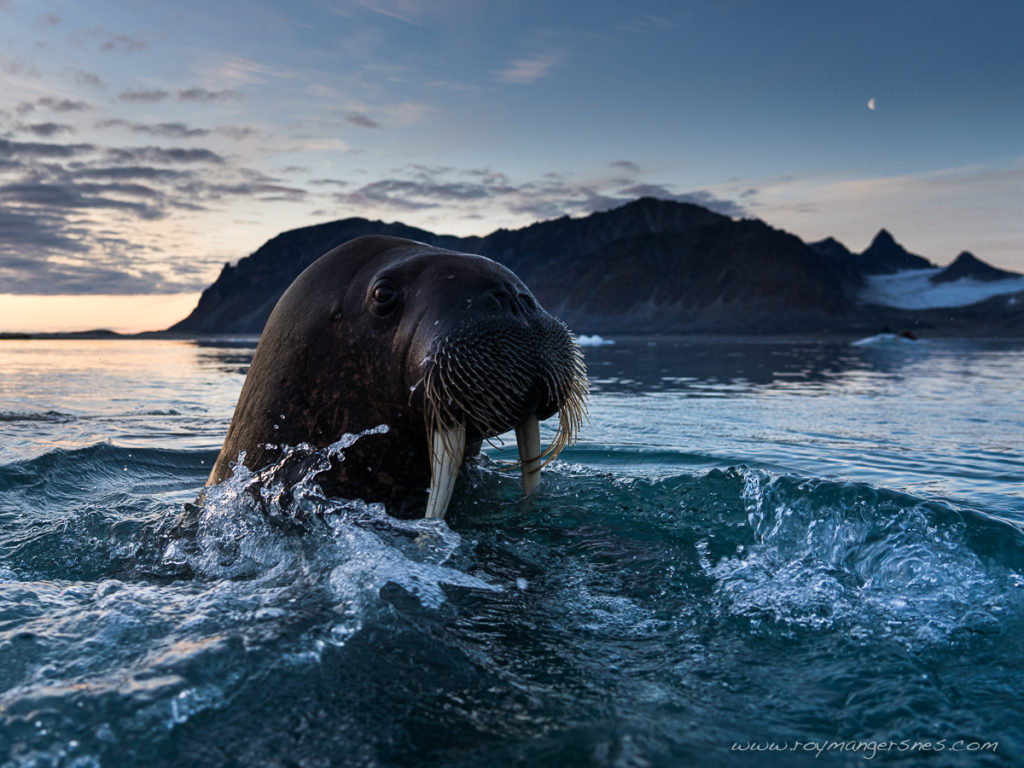 The Walrus and the moon. 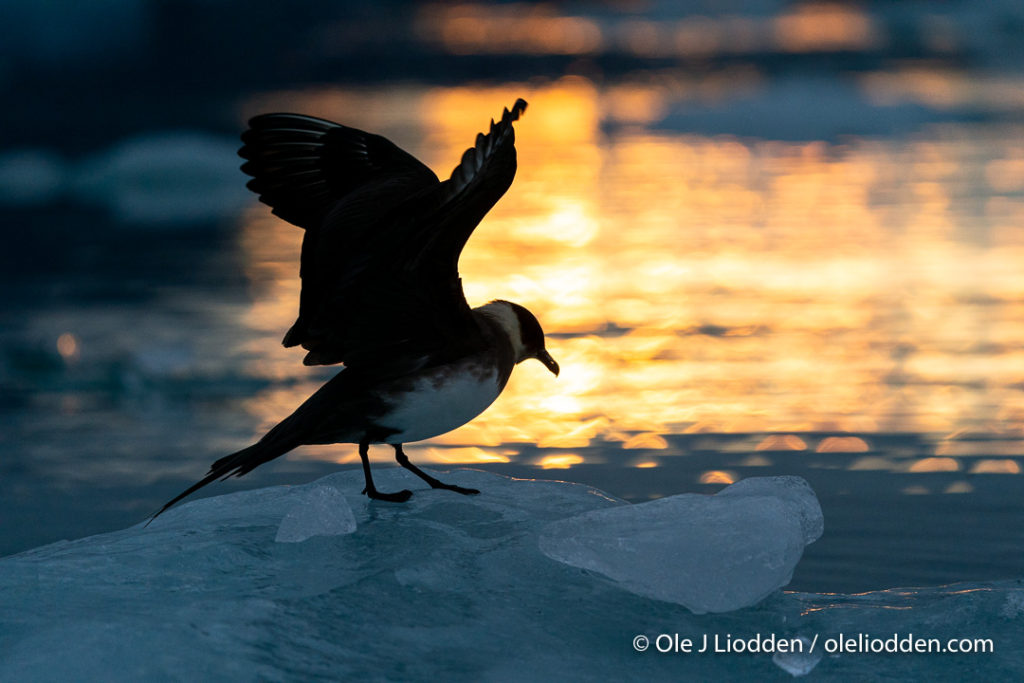 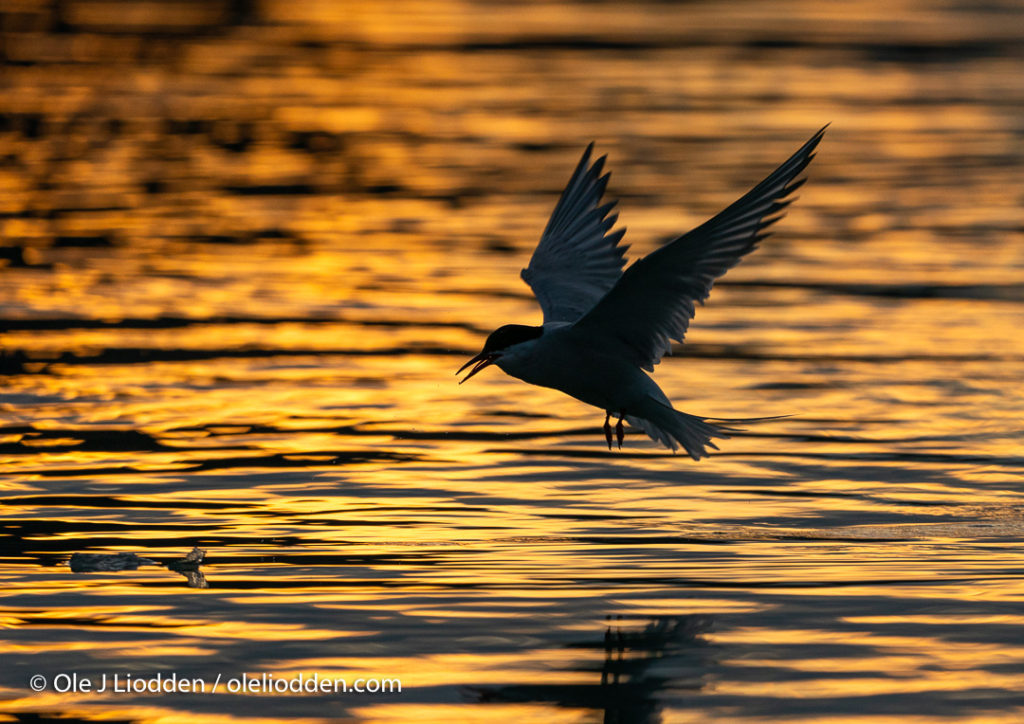 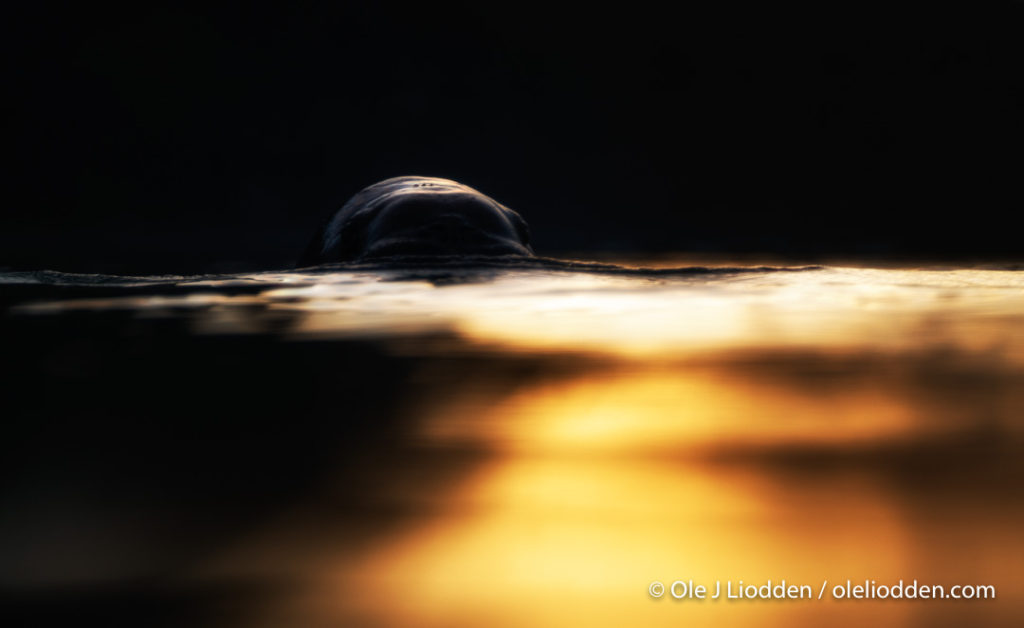 Walrus in the last rays of sun. 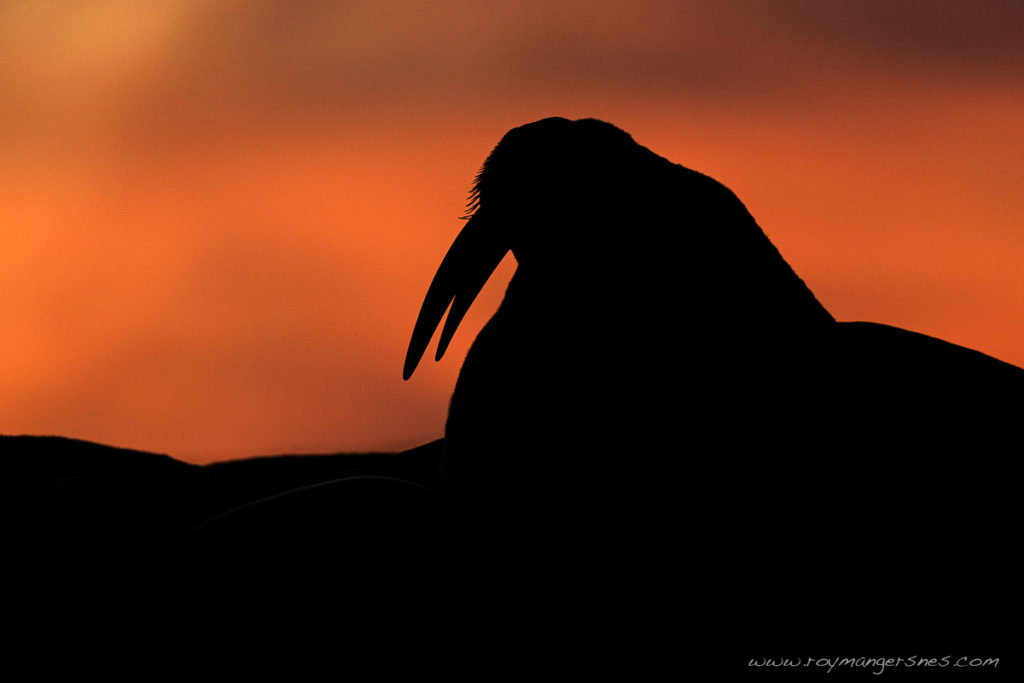 Day 9 – 11.9.2020 Early in the morning we entered Krossfjorden and went north to Lilliehöökfjorden. Here we did a ship cruise and got to see a massive calving of the Lilliehöök glacier. 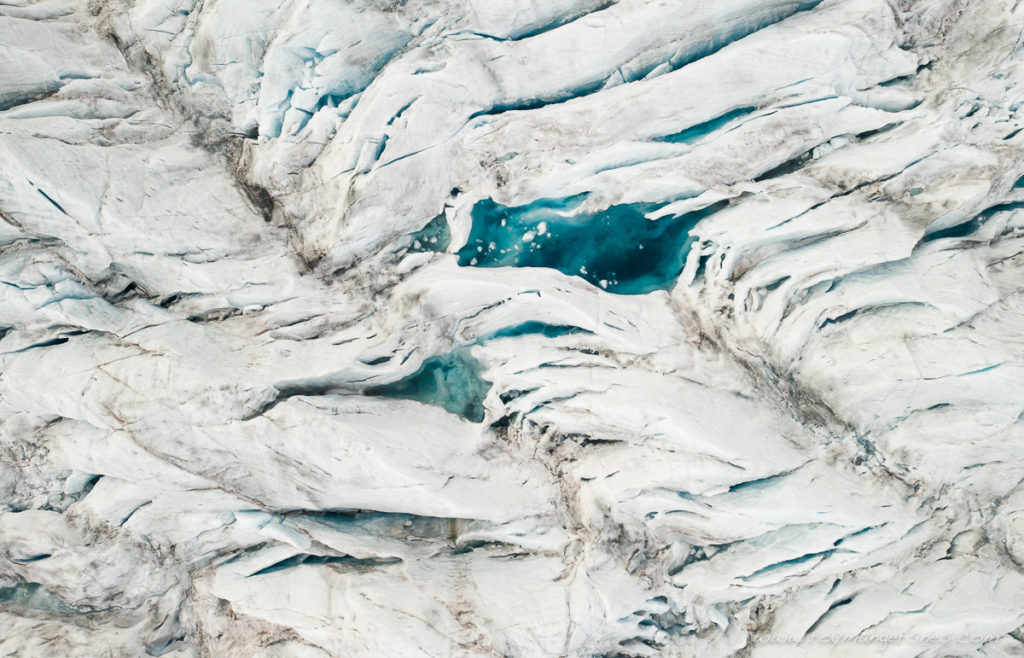 Details of the Lilliehöök glacier.

In the afternoon we got to Ossean Sars where we did two zodiac cruises this evening. During the first outing we found an Arctic fox on a reindeer carcass and also a couple of Harbour seals that were resting on the shallow rocks. 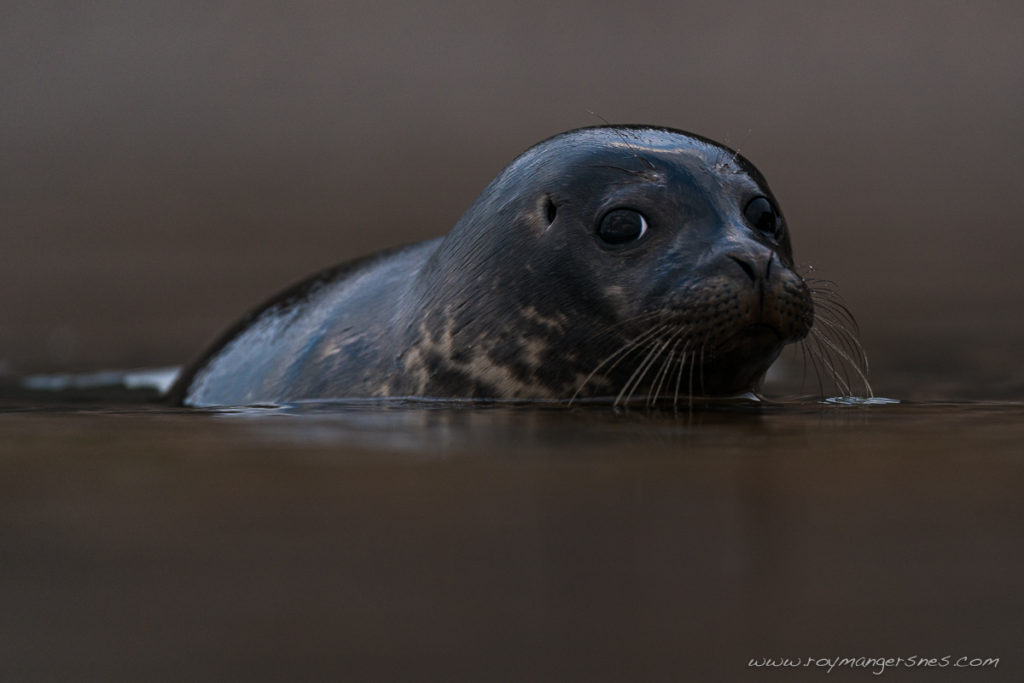 Harbour seal resting on rock near the beach.

After another great dinner we went back out. Not long after we found a sleeping Polar bear far up in the cliffs. We left it sleeping and went to search for something to photograph in the nice evening light. We found beautiful ice formations, blue ice, some kittiwakes, Fulmars and Arctic skuas and even reindeer on the islands. 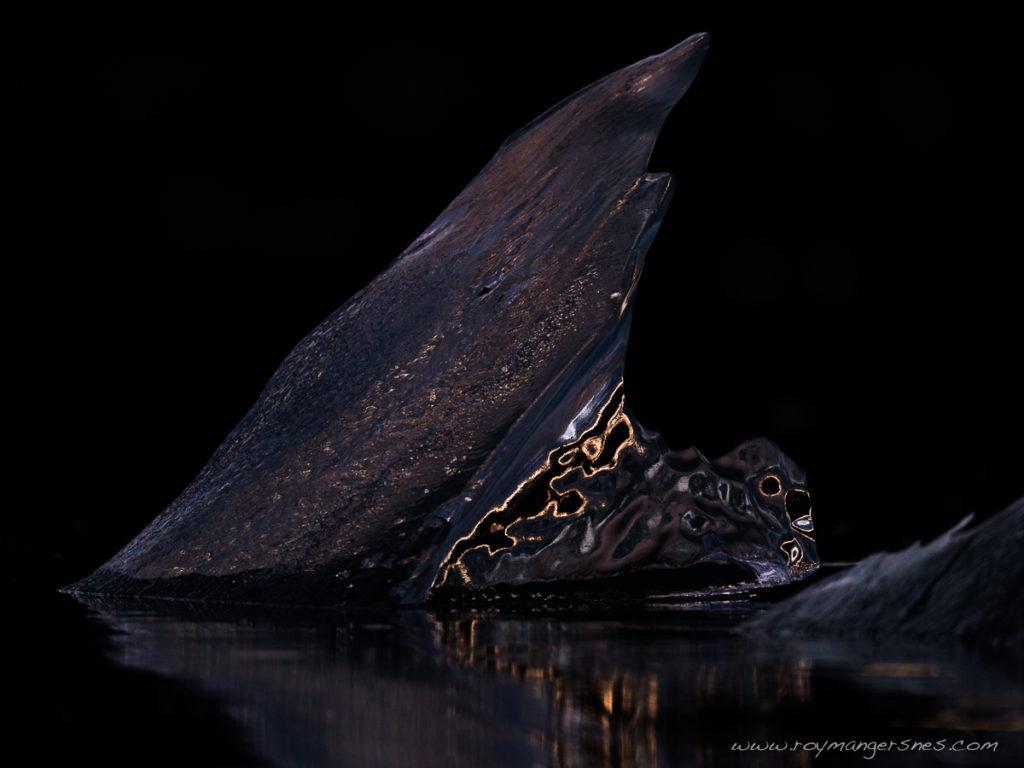 Day 10 – 12.9.2020 After breakfast we entered Isfjorden, and went out for a landing. Our plan had to be cancelled as a Polar bear was sleeping right at the landing sight. Instead we spent some time with a patrolling Arctic fox on the beach before coming back for lunch. 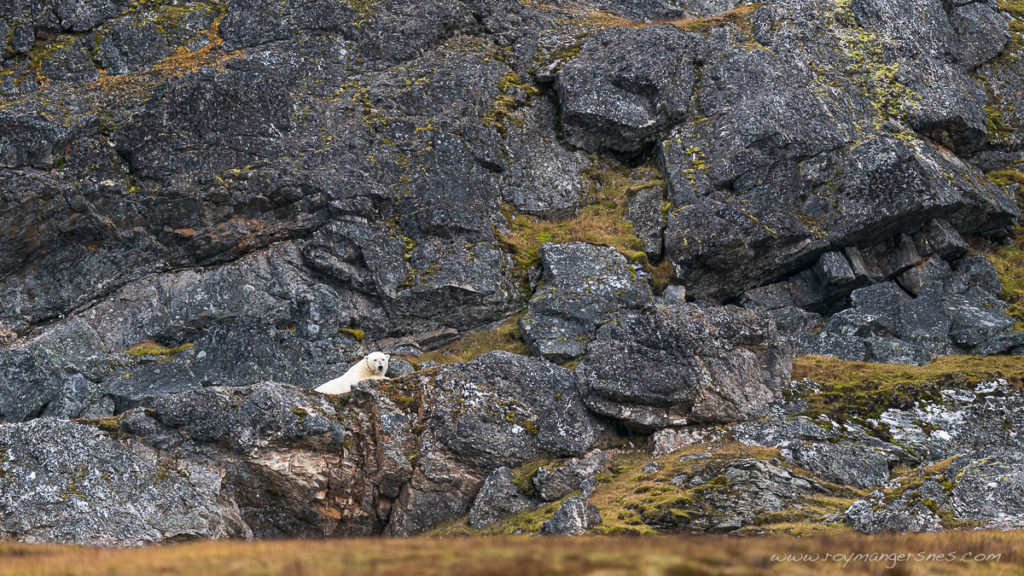 Polar bear resting in the rocks, just by our landing site. 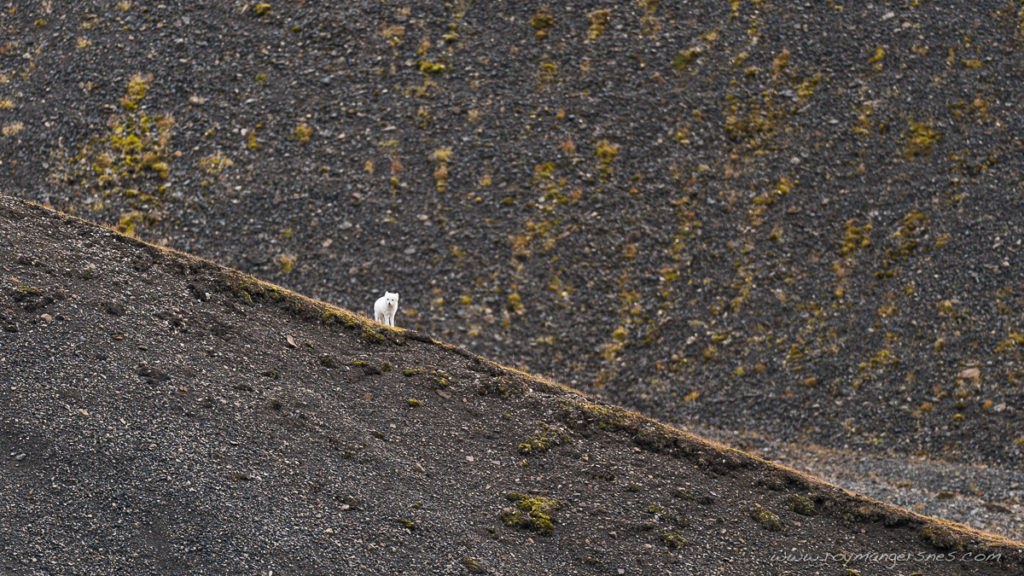 An Arctic fox that has already changed to its winter coat, in a rocky landscape.

In the afternoon we sailed along the coast to searching for wildlife. In the last bay we saw a Minke whale from a distance and then ended the day with a very nice encounter with a single Humpback whale sleeping in the surface and also showing some bubble net feeding behavior next to our ship. 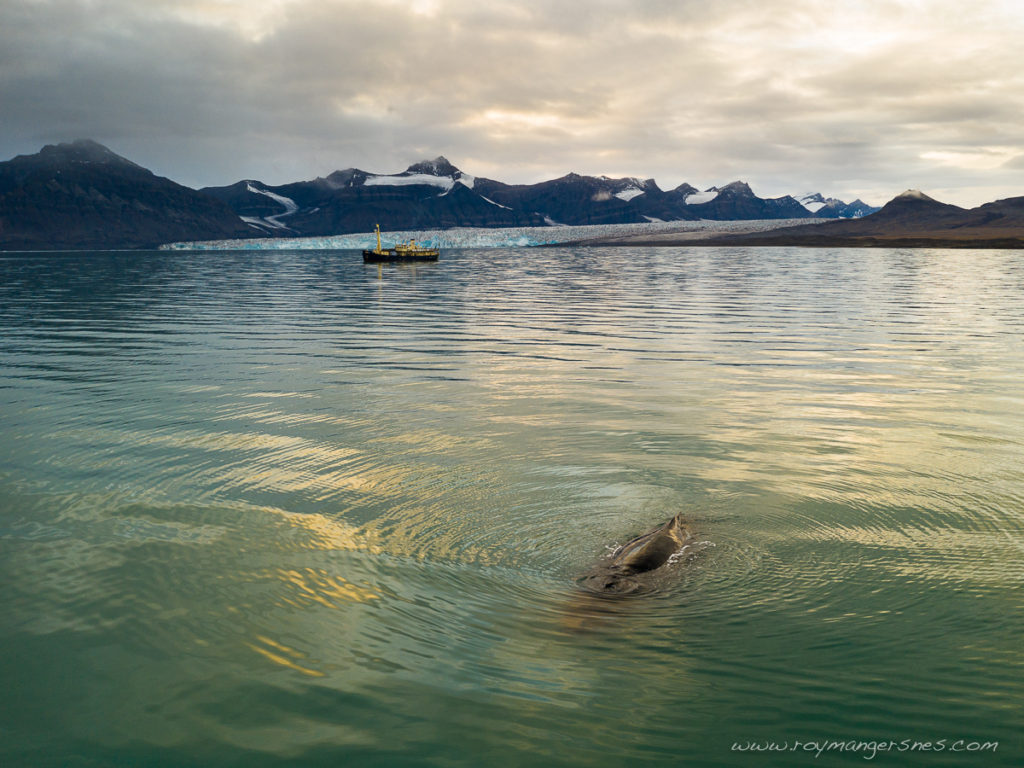 Humpback whale resting on the surface in one of the Isfjorden bays, with our expedition ship in the background.

The ship arrived in Longyearbyen late that evening for our last night onboard.

Our sixth and last Svalbard expedition of 2020 was yet another great success and we were extremely grateful to complete the season covid-free. It turned out to be a much shorter season than we planned but we expect to come back even stronger next year and will do our best to keep delivering awesome tours for our guests, like we have been doing for years!

We thank both guests and partners for trusting us in providing a safe expedition in these difficult times!