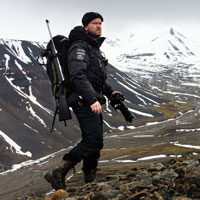 Roy Mangersnes is a trained behaviouralist and professional wildlife and conservation photographer living in Sandnes, southwestern Norway. Roy is a former Nikon ambassador and is considered among the most influential nature photographers in Norway today. He is former chairman of the two largest nature photography associations in Norway; BioFoto and Norwegian professional Nature photographers Association. He has published several books, as well as won multiple international awards including BBC Wildlife Photographer of the Year (UK), European Wildlife Photographer of the Year – GDT (Germany), Nature Best Awards (USA), Golden Turtle (Russia) and was awarded Arctic photographer of the year 2013 by the Global Arctic Awards (Russia). Roy is working around the world and his images are being published in magazines and books all over. He is also an experienced speaker and has been presenting his work at several international photo festivals.

Besides his carer as a photographer Roy is partner and photographic host at WildPhoto Travel. He will be doing assignments around the world to destinations ranging from the Arctic to the Antarctic, also visiting destinations in Africa and the Galapagos Islands.

Roys background as a biologist and his passion for wildlife makes him well suited to host photographic expeditions to remote destinations. His knowledge will be useful both from a photographers point of view to interpret and anticipate the behavior of wildlife subjects, but also from a guide point of view.

For Roy photography is about sharing, either through his images or as a host in the field.