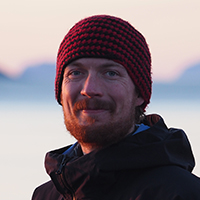 Since his first vacation to Norway in 1996, Christian has suffered severely under the quite widespread “polar fever”. He has been exploring both the mountains and coastal regions of Norway, Sweden and Greenland by feet, on skis and in his sea kayak. 2008, while studying Industrial engineering, Christian moved to Svalbard. Finally, after nearly three unforgettable years and experiences at 78 degrees North, he moved “down South” to Tromsø in Northern Norway where he finished his Master’s degree in “Technology and Safety in the High North”.
Since 2009 Christian is working as a freelance guide and expedition leader all year around. First and foremost, around Svalbard (50+ times) and Greenland (20+ times), but since 2014 also towards the Antarctic Peninsula (20+ times), South Georgia and even the Ross Sea in 2020. He loves both the minimalistic landscape and quietness, wildlife encounters, and the heroic history of the high latitudes.
He is also a sea kayak instructor with his speciality being trips with Orcas and Humpback whales in Northern Norway since 2013.
When Christian is not in the very high latitudes, you probably find him playing around in his sea kayak off the Norwegian coast in wind and waves.Christian is a real generalist, but especially loves to lecture about Polar history, Whales/Cetaceans & Glaciers & Sea ice. As Christian is always on the move in the mountains and on the sea, he has a very minimalistic approach to his photographic equipment. He always brings his gear on every activity, ready to photograph when opportunities arise. Christian has his strengths in both extreme patience and “visualizing the perfect picture” regarding time & light conditions, location and wildlife opportunities. There is nothing he loves more than maximizing special photographic opportunities for his guests.